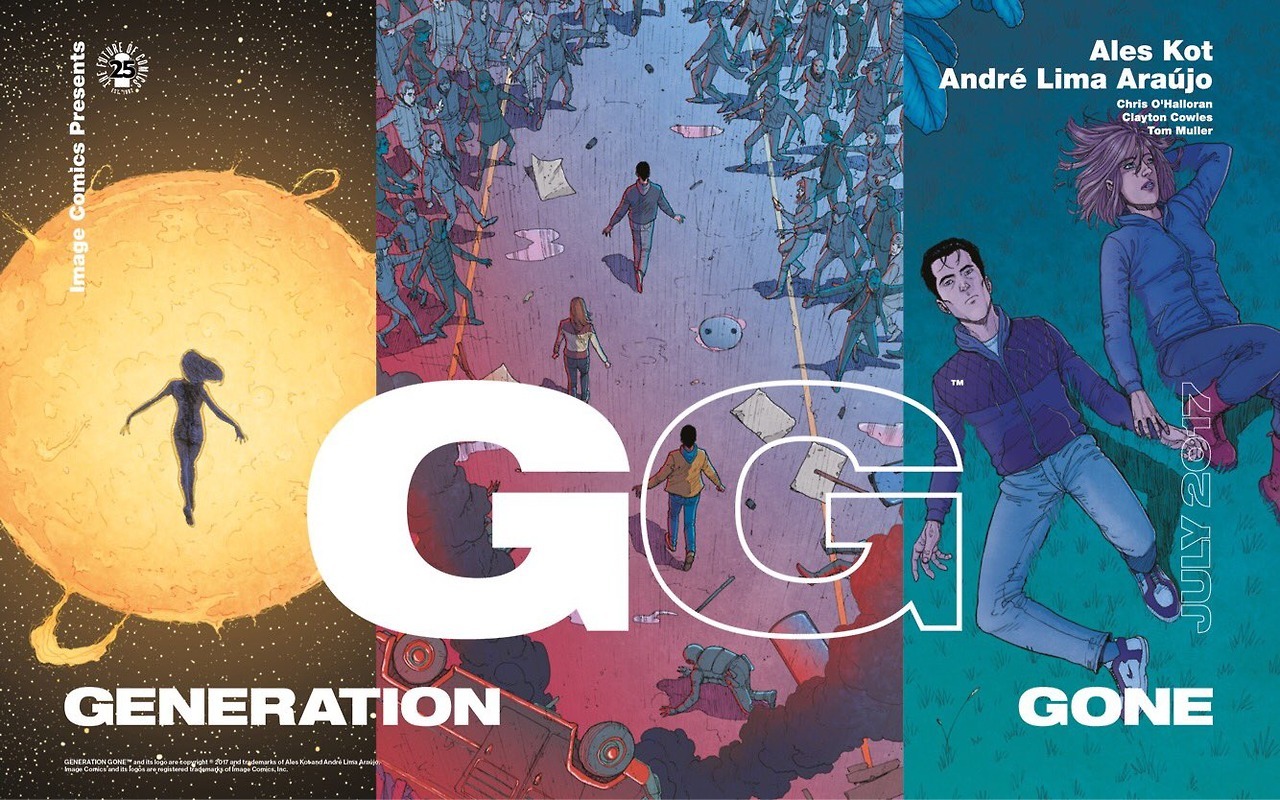 Generation Gone is simply delightful. It’s a new sci-fi book about hackers, espionage, the military-industrial complex, and human evolution with great visuals and some very interesting concepts. Ales Kot and Andre Lima Araujo’s dish a story that explores how science is the closest we’ll ever get to real-life magic. 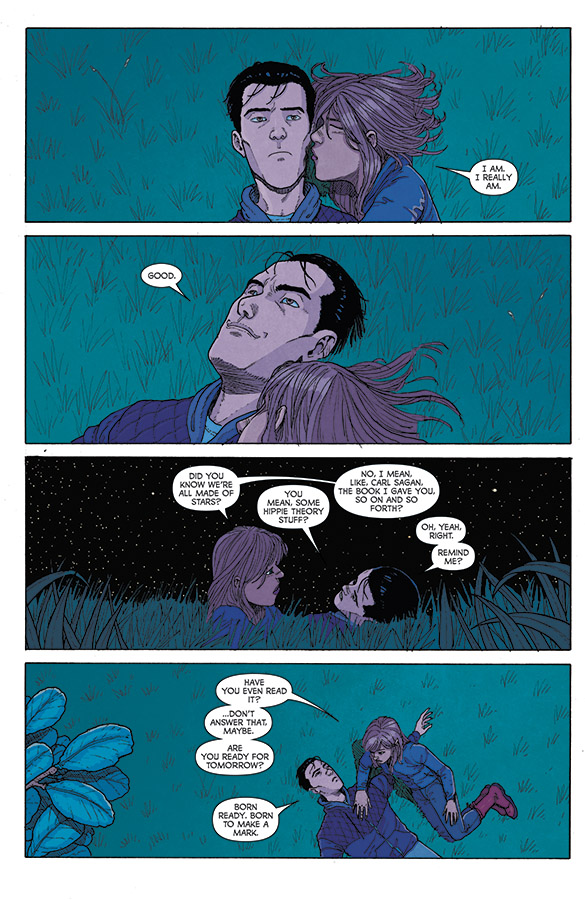 What immediately caught my attention was the opening conversation in the book. Nick and Elena, who are preparing for a very big hack job, are looking up at the stars in a seemingly lovely moment of quiet before the storm. Elena loves Nick, who is verbally and emotionally abusive to her, and Kot does a great job of slowly unfurling just how toxic their relationship is. I hated Nick about a page into the book and felt bad for the poor Elena, who has more than her fair share to deal with. She’s being dragged along by Nick to what will surely be a bad end and she’s not yet willing to do anything about it. 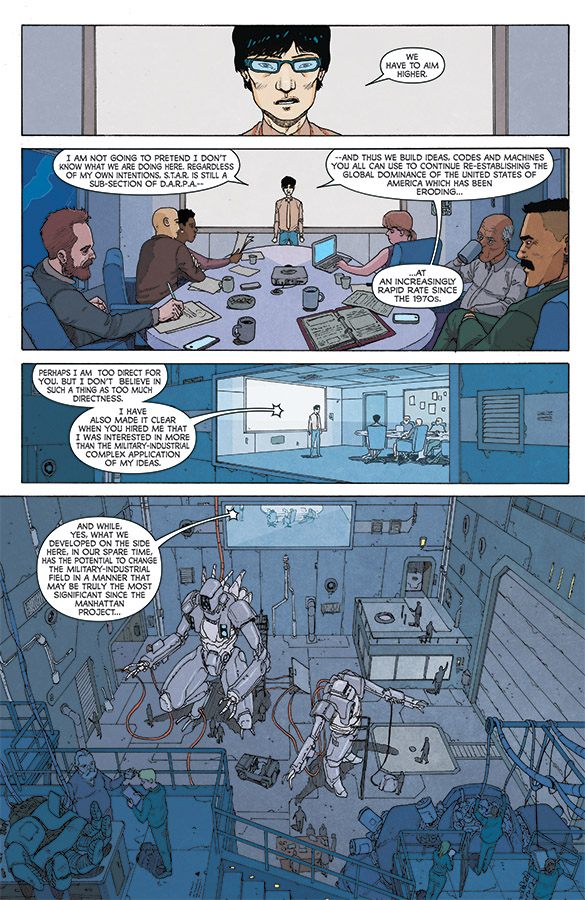 In fact, all of Generation Gone’s characters are just fantastic, which shouldn’t be a surprise to those who have read some of Kot’s other work, such as Wolf, Zero, and The Surface. Nick and Elena’s partner, Baldwin, is bent on getting their latest job done — and it’s one that could potentially set them up for life, enough for each of them to get all of the things they want. Of course, because this is a cruel world, things will never be as simple as that. 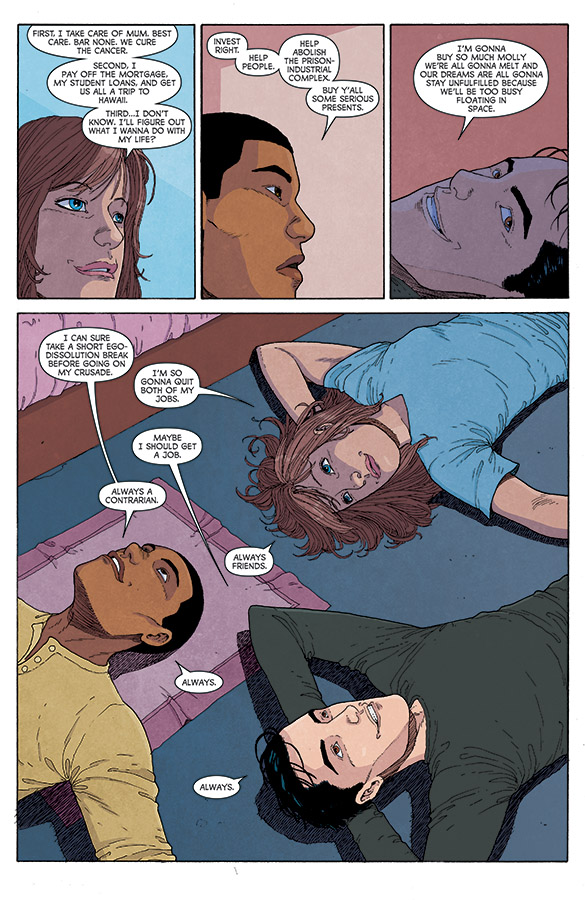 The enigmatic Mr. Akio, a scientist who is working on a secret project for the U.S. military, is particularly captivating. He is quiet and calculating and has some very big ideas about humanity’s future. His project is the stuff of great science fiction, and I can’t wait to see how it all begins to roll out and go terribly wrong. Already in the first issue, we get hints that things will not go as planned for any of the characters.

Araujo’s pencils are inspired. His figures all look like wide-eyed dreamers, a perfect complement for the type of psychedelia Kot loves to spin in his books. I love how he draws the subtle changes in Elena’s expression. You get the sense that she feels trapped in her relationship with Nick, and that she knows he’s no good for her. But she can’t quit him. Araujo draws Elena’s affection, elation, and sudden sadness to a devastating result. It’s just great storytelling.

Chris O’Halloran’s colors will surely come in handy as things get a bit weirder in the next few issues. While his colors tend to be a bit muted throughout, there’s a moment of bizarre body horror that really showcases how wild O’Halloran can get. The colors are bright and mesmerizing. 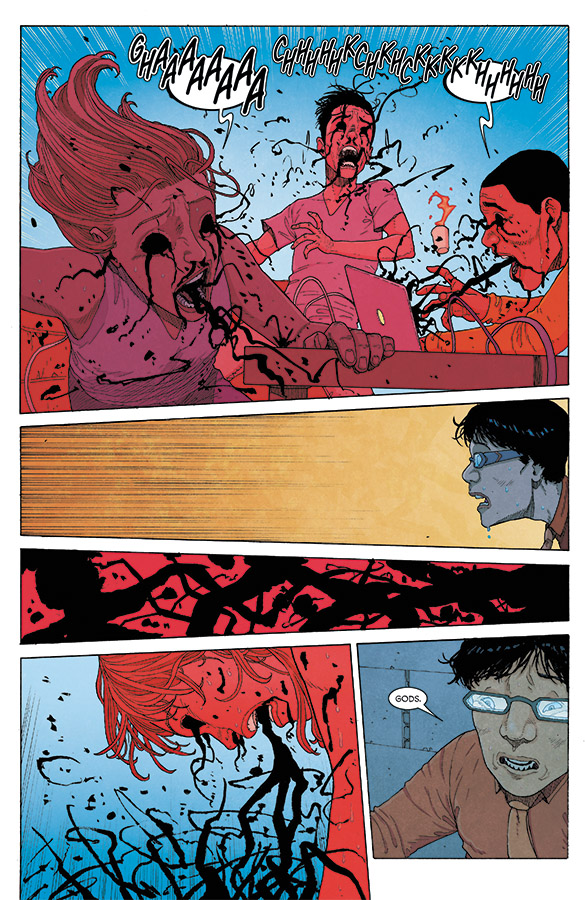 Image is perhaps the number one purveyor of quality science fiction comics, with books like Saga, Black Science, Low, and many more delivering some of the best stories on the rack. Generation Gone is soon to join that tradition. It’s first, big 56-page issue is just so good.