Put simply, Gears of War 4 is the Force Awakens of the series. It does a lot of things exceptionally well, so well that it often makes me wonder if Gears as a series has any tricks left to offer. For those who haven’t picked up a Gears game since Gears of War Judgement or even 3, Gears of War 4 is the first game in the series to be developed by Microsoft’s in-house team known as the Coalition. Led by series veteran Rod Fergusson, the Coalition has crafted a loving tribute to the work that EPIC game did on the series for nearly a decade.

The campaign takes place 25 years after the events of Gears of War 3; the Locust haven’t been seen at all in that time and peace has taken hold on the planet of Sera. Players assume the role of JD Fenix, son of Marcus Fenix, and his friends Kait and Del who live outside of the authoritarian COG. A quick prologue reacquaints new and old players with the world of Gears. For the first chunk of the game, JD and friends fight a small selection of robots but it isn’t long before a new threat emerges and what follows is classic hyper-violent Gears action. The new swarm enemies feel like a reskin of the basic locust units from the first game they’re fun to fight but lack to the imaginative variety of the older games. Three entirely new enemies appear later in the campaign all of which are excellently designed for fighting in co-op, however in single-player some of these enemies particularly the snatchers are simply not fun to fight.

Tonally the story of Gears of War 4 feels much more light-hearted than its predecessors. The banter between JD, Del, and Kait is funny with running jokes that carry on throughout the campaign. At times the comedic nature of the characters can feel at odds with the bleak tone of the past, but the game does know when to slow things down and take things seriously. The story is also much more personal this time around focusing on the main characters building their relationships while trying to figure out what’s going on. The story is well done with some fun surprises for fans, but it never feels all that important in the grand scheme of things and the ending feels rather abrupt. The new environments are mostly well done too varying from chapter to chapter from big open outdoor spaces to narrow caverns.

On the gameplay front, Gears of War 4 feels almost identical to past games. Classic weapons like the chainsaw-equipped Lancer make a return along with nearly the entire series arsenal minus a few weapons. There are a few new weapons too most notably the Buzzkill, a gun that fires deadly bouncing saw blades, the few times it shows up are a blast. The controls have not changed at all meaning the active reload, and the A-button based cover system make a return. The cover system is where Gears’ gameplay starts to show its age; I often found myself stuck on cover when I didn’t want to and would occasionally have trouble navigating areas to get the drop on some of the faster enemies. Control problems also come up often when trying to pick up ammo which would frequently result in me accidentally picking up a weapon I didn’t want and then scrambling to find the gun I just dropped. These are both minor gripes, but considering that many games have found solutions to this problems, it feels like a wasted opportunity on Gears of War 4’s part to modernize. The one semi-new thing that appears in campaign is the fabricator a machine which, in specific situations allows players to manufacture weapons and defense structures for mini hoard-mode scenarios. I find the idea of spawning in turrets to be a bit jarring in story mode, but they do manage to mix up the gameplay in a few positive ways. For more tradition shootouts, combat arenas are varied and sometimes feature unique twists. And of course, it wouldn’t be a Gears game without some over the top vehicle segments. 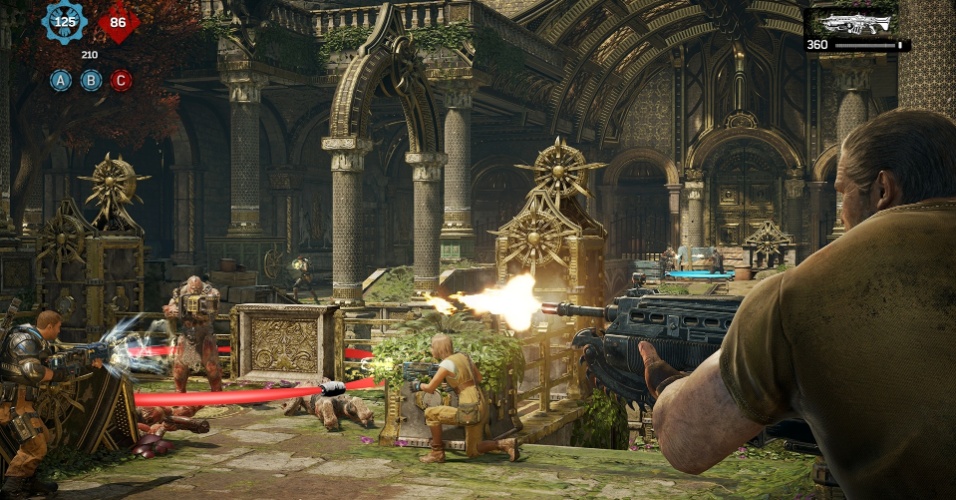 Gears of War 4 features a ton of multiplayer features from traditional campaign co-op to multiplayer modes that can be played with a team of human players against bots in matchmaking. Having the ability to play all modes against AI is a welcome addition for less skilled players or anybody who is intimidated by the hyper-aggressive nature of Gears multiplayer. Standard multiplayer is back too, and it’s as ruthless as ever. New modes like arms race, where players start with the most powerful weapons and every few kills they are swapped for weaker ones, add some variety but multiplayer is still not for the faint of heart. For those looking for a strictly team based mode, Hoard has returned this time with classes and a moveable fabricator that lets you pick what defenses you wish to place. In hoard, a team of players is set up against increasingly difficult waves of enemies from campaign, and it’s the best version the series has seen yet. Every match you play in multiplayer, and hoard earns you credits that can be used to purchase random packs that feature mostly cosmetic upgrades and minor stat boosts, these can also be bought with real money, but you accumulate points fast enough where there shouldn’t be a need to.

Gears of War 4 is a very good imitation of past games in the series that any fan should love. However much like the latest Star Wars, it is possible to stick too close to the familiar. If Gears is to continue into the foreseeable future, it needs to evolve. It was fun to take a trip down memory lane, this time; it might not be if the next game, and the one after that do the exact same thing. With a universe a rich as Gears, it would be a shame to see it wiped out by stagnation. Hopefully, now that the Coalition has wet its feet with this first effort, it will be willing to take bigger and more exciting risks in the future.