Fullmetal Alchemist Animes which one is better?

When two anime series adapt the exact same property, you can’t help but compare them.  The two Fullmetal Alchemist adaptations are both well-crafted pieces of anime, but which is...
by Alexandra Wilson February 13, 2017

When two anime series adapt the exact same property, you can’t help but compare them.  The two Fullmetal Alchemist adaptations are both well-crafted pieces of anime, but which is better? That’s a debate left to the fans and as a fan, I’m going to debate it with myself here. 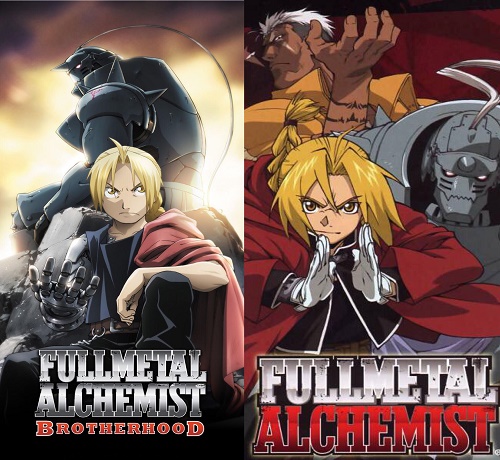 It’s no secret that Fullmetal Alchemist is one of the industry’s most successful manga franchises. It spawned two anime adaptations, the first of which started and ended before the manga had even ended. Several live action adaptations have been made and planned, as have animated films extending the franchise, and you can still find FMA merchandise at cons and in stores across the country. It’s clear that FMA was a financial and creative success.

But, if we’re comparing the two manga adaptations, let’s break it down by specific categories to determine which is better:

FMA: This was the introduction for many fans into the Elric Brothers. As the manga had not been completed at the time of production, the story started out true to the manga – then veered dramatically.  Instead of expanding on the larger FMA world, it focused on the characters emotional ties and used those to propel the story forward. This didn’t work, and by the time the series ended, it was clear that the anime’s creative team needed more material to keep the show engaging.

FMA Brotherhood: Having been made after the manga was complete, the creators had a stronger and more detailed template to draw from. The result was a much more suspenseful show that focused on alchemy as much as it did on politics. Though it was very different than its predecessor, it was a strong story that resulted in a strong conclusion.

Winner: FMA Brotherhood. While FMA can be credited for its more emotional storylines, those are early on and are not well-replicated throughout the show’s run. FMA Brotherhood is significantly more compelling.

FMA: The animation style did an excellent job of bringing the manga to life on screen.  Instead of making the acts of alchemy seem laughable, it made them compelling and – dare I say it – cool.  The show’s animators created a tone that uniquely balanced the serious and humorous aspects of the story without detracting from the overall action. Also, the animators got little details (like the hands reaching out for young Al) correct. It was this attention to detail that made the show so well-rounded.

FMA Brotherhood: Unlike its approach to the story, the second anime series does not improve on its predecessor’s work. Though the animation is more detailed and sharper, it’s mostly due to new technologies instead of any creative innovation.  In general, the series has a darker tone that is clear in the animation as well.

Winner: FMA. The animation of both series is excellent, but one of the strongest aspects of the first series is the way they styled the acts of alchemy.  FMA Brotherhood needed to expand on that to win this category, but it didn’t.

FMA: Aside from the Elric Brothers, the FMA universe is full of unique characters. Without them, FMA significantly less interesting and entertaining.  Because of their reliance on already-published manga, the focus on characters is smaller and there is less dimension given to everyone outside of the Elric family. This is a shame, as some of the best characters have no familial relation to Edward and Al.

FMA Brotherhood: By including more plots and subplots, FMA Brotherhood gives significantly more attention to the supporting cast.  Instead of complicating the show, it only gives you more reasons to tune in. Plus, when these characters get to star in their own episodes, it has an emotional impact that the other series didn’t.

Winner: FMA Brotherhood. Again, both are great, but Brotherhood has more content to work with – and thus more opportunities for characterization.

FMA: What is an anime series without the music? “Ready Steady Go,” aside from being a great opening, the new song for your gym playlist. The Elric brothers’ theme, appropriately titled “Brothers,” was heartwrenching even without the song’s context.

FMA Brotherhood: The new series did not use music from the earlier adaptation yet still managed to hit the same successes. “Again” supplanted “Brothers” and was positively received, though it’s not as strong of an opener. But “Golden Time Love” is insanely catchy (in the best way).

Winner: Tie! Both soundtracks are exceptional.

Fullmetal Alchemist: Brotherhood is the victor.  The story is stronger, and that serves as a better foundation for everything else that follows.  Unfortunately, the original FMA anime is bogged down by a slow ending and ridiculous sequels that don’t ring true to the story’s themes.