Fu Jitsu #1-Review by Ashish Thomas It’s a new series Alert-AfterShock Comics one of the best new publishers in comics has another great series coming out from Jai Nitz...
by Ashish August 31, 2017

It’s a new series Alert-AfterShock Comics one of the best new publishers in comics has another great series coming out from Jai Nitz and Wes St. Claire called Fu Jitsu here is our advance review. 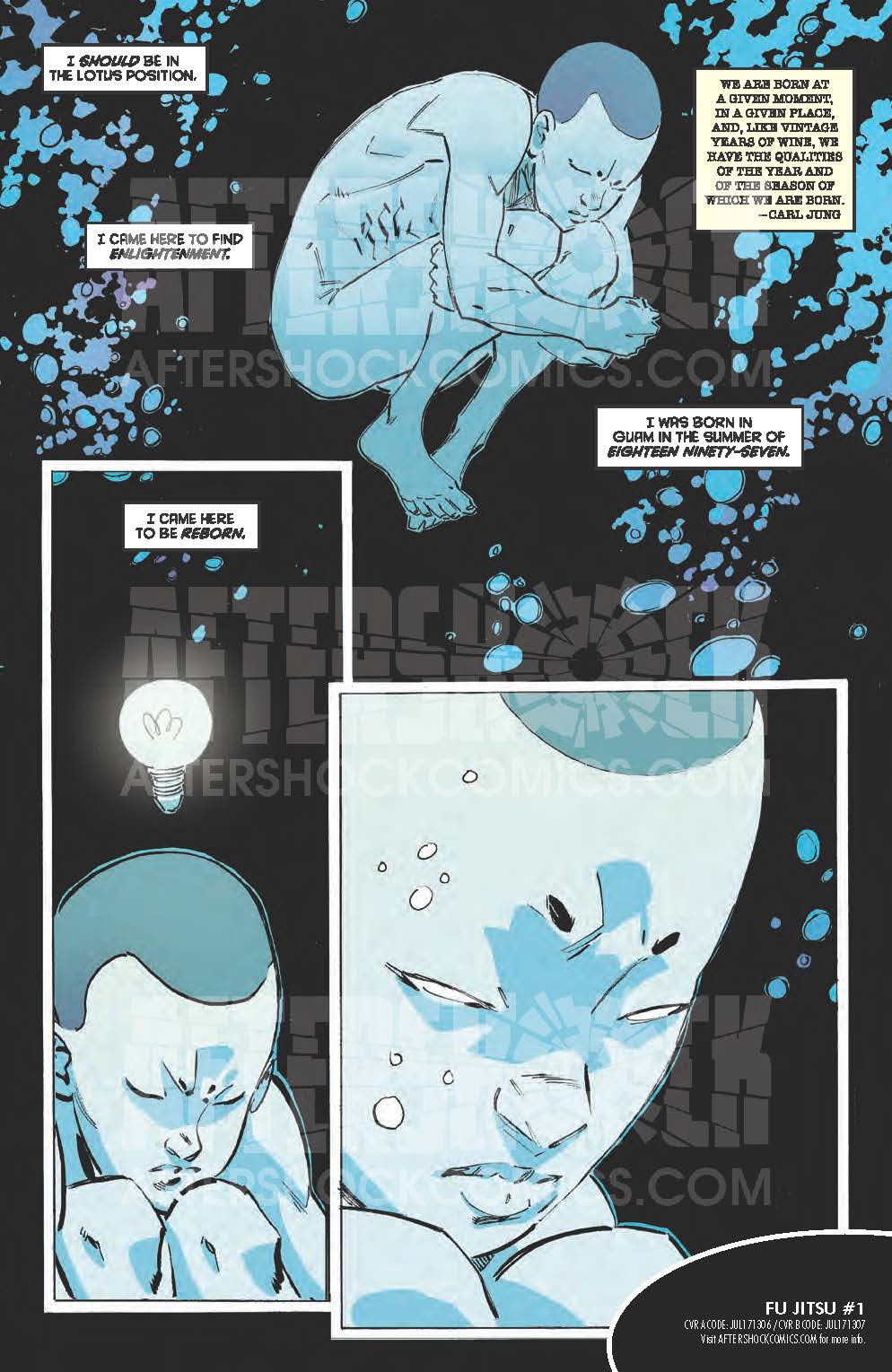 In Fu Jitsu, we meet Fu  Jitsu the worlds smartest man who for the last One Thousand One Hundred and 32 days has been living in exile in Antarctica to try and get over a breakup.

After emerging from the exile, we see Fu try and harness his abilities which he thinks he needs to tinker more with to get it right. 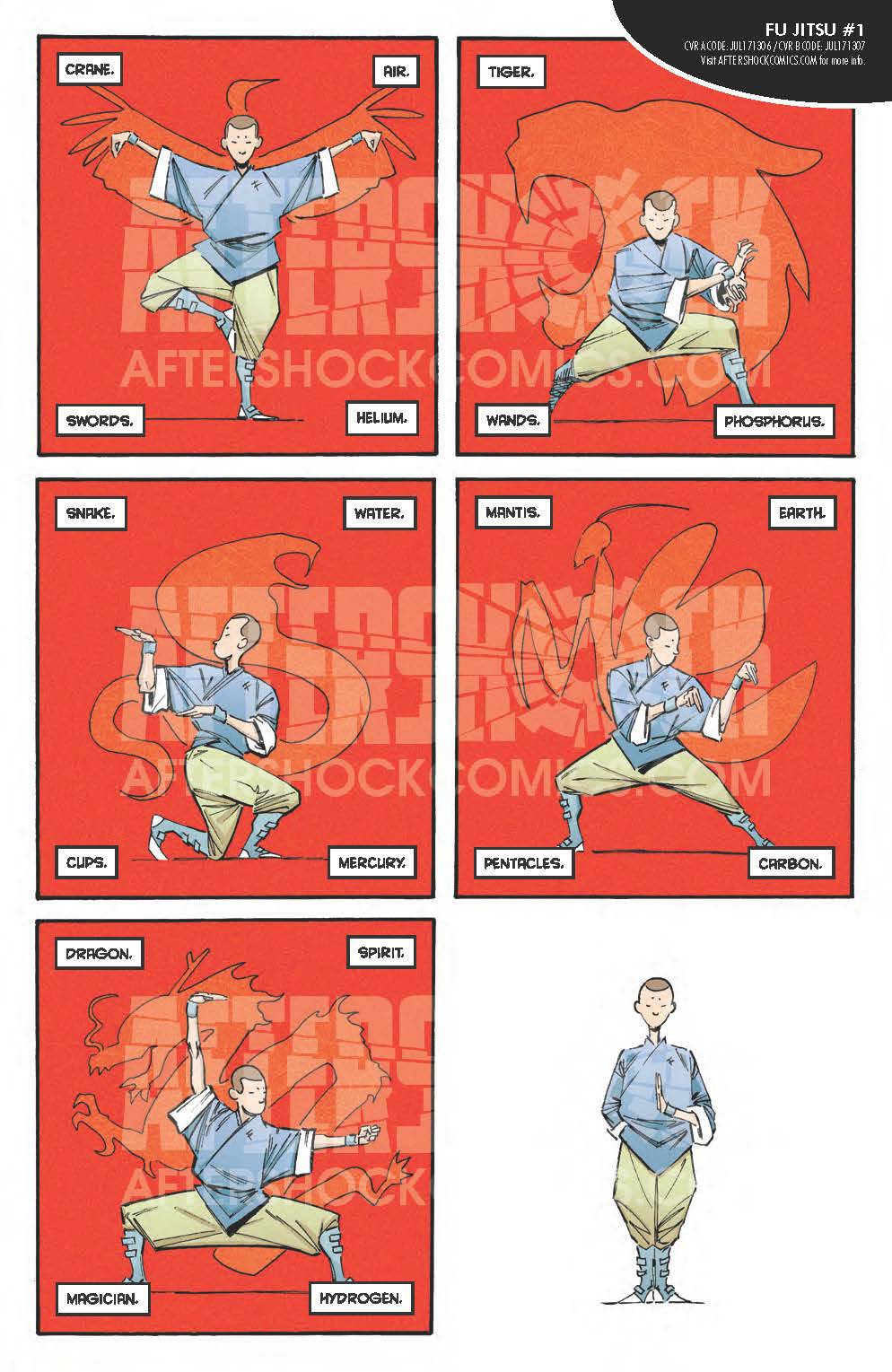 The story then shifts to St. Pauls Minnesota where we see three men searching for something afraid that they might go to jail eventually we find out that the person in charge is Robert Wadlow and he has just found the ultimate weapon the Atomic Katana. The Atomic Katana forged from the fires of Nagasaki and was stolen. All who have possessed the Katana have been cursed and died, but now it is in its owner’s hands. Wadlow now seeks to take over the world as ruler, but there is one problem..Fu Jitsu… So Wadlow sends his best assassin James Dean to eliminate the problem. 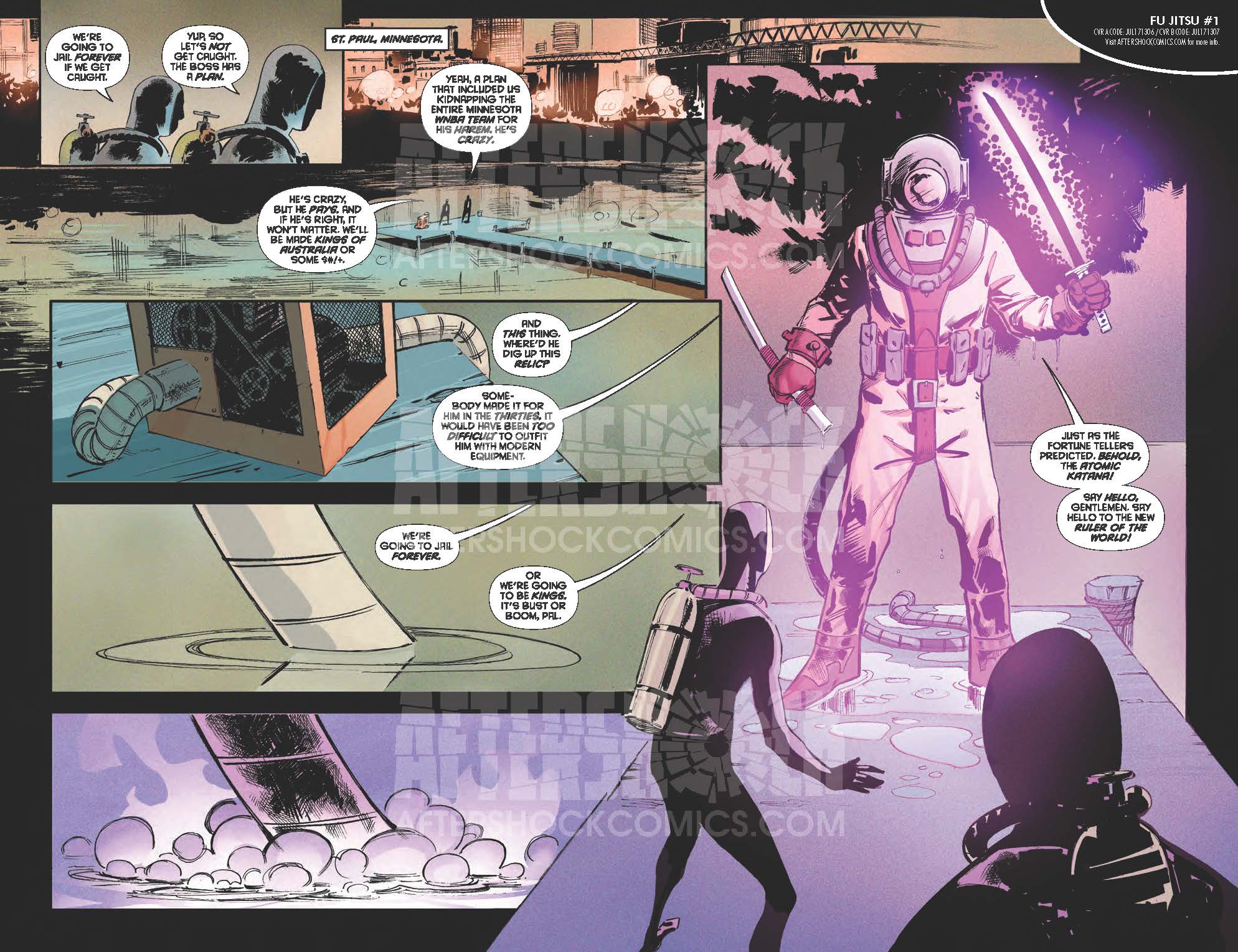 We see James Dean come to Antarctica to assassinate Fu Jitsu. First Dean kills the two doctors and then Dean battles Fu. The fight is back and forth with Dean getting a few good licks in the fight.  However, things turn when James Dean and Fu Jitsu find out that Deans boss wanted to make sure Fu was taken care of no matter what.  If you want to know what Wadlow did you have to read the issue?

After the assassin’s attack, Fu realizes that Wadlow has escaped from prison and he must find and stop him. An old friend returns to Fu at the end of the issue. 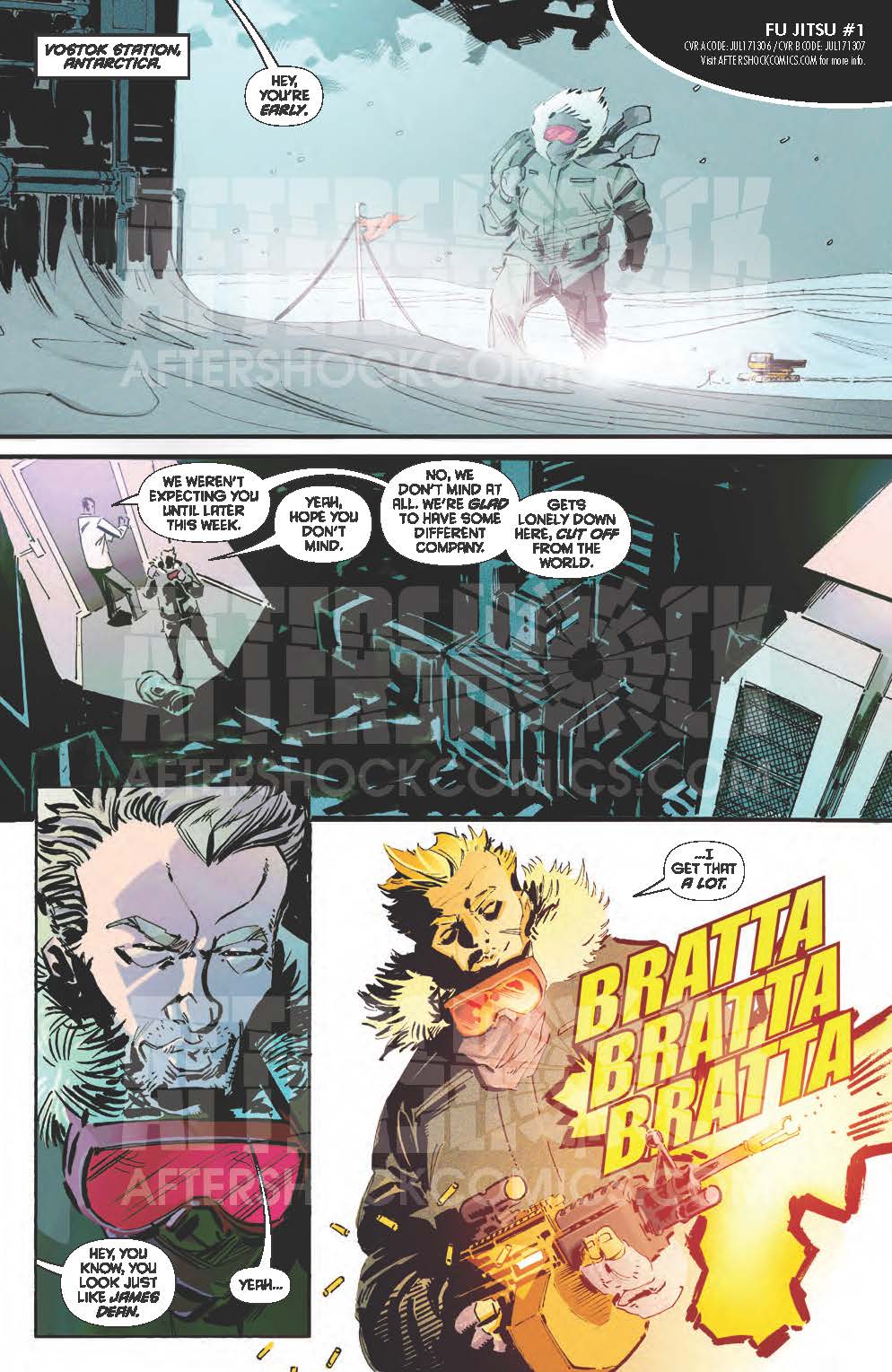 Fu Jitsu is the perfect starting point for a new series, Jai Nitz’s story gives the perfect amount of story and plenty of questions to keep people coming back for more. I dislike origin stories and thoroughly enjoyed how Fu was established as the worlds smartest person. Robert Wadlow is a villain people will enjoy. The reader will not learn much about Wadlow but what you learn is that he will be a true match for Fu. I cannot wait to see the adventures Fu and Wadlow go as they face off against each other with the fate of the world is in their hands. Also, cannot wait to see how the Atomic Katana will be used in Wadlows plan to take over the world.

Wes St. Claire’s art is striking showcasing the prowess of Fu and brilliantly displaying action sequences that are difficult to portray in comics. The backgrounds are gorgeous, and the world looks amazing. Also who ever is the colorist chose a great array of colors for Fu Jitsu.

Fu Jitsu #1 is a fantastic story that grips you from the start; it seems like Jai Nitz and Wes St. Claire will have us go on a great adventure with Fu. Again another great new series from AfterShock Comics another to add to the pull list you’re not going to wanna miss a moment of Fu Jitsu. Final Order cut off date is 9/4/2017 so get those orders in for Fu Jitsu #1. 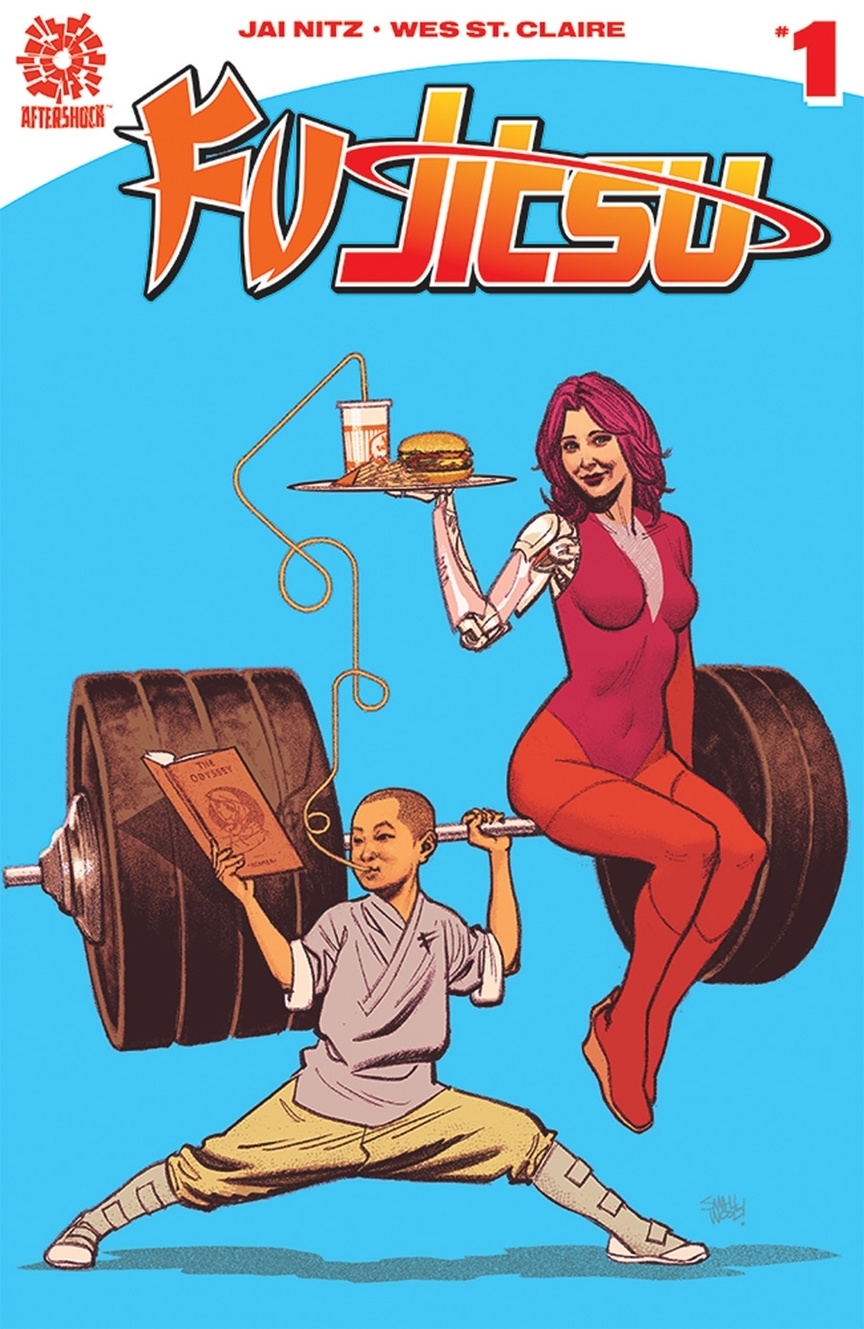