With the current state of American politics, this installment of the Franchise Files could not have come at a more appropriate time.
by Paul Aloisio November 13, 2016

If there was ever a time for one to revisit the sixth installment in the Star Trek film franchise, that time is now. The Undiscovered Country sends the crew off for one final film about prejudice and redemption. However, this time, the prejudiced one is Kirk, not an outside species.

The tone of the film is the darkest yet for any film in the series. Everything from the lighting to the score has taken on a darker feel, drenched in shadow and somber mood. When talks begin about opening up a peace treaty with the Klingon Empire, sides are quickly drawn within Starfleet. There are those who think an attitude of peace is necessary; there are others, however, who believe that Starfleet should strike the Klingons now and erase the problem of their existence once and for all.

One of these people who want to eliminate the Klingons is Kirk (William Shatner). He’s had a long history with the species and his son being murdered at their hands during the third film certainly has not helped his outlook. In what feels very much like a personal betrayal, Kirk’s closest friend Spock (Leonard Nimoy) has volunteered for Kirk to serve as an escort for the Klingon leader Gorkon (David Warner) and see that he arrives safely the peace treaties on Earth. 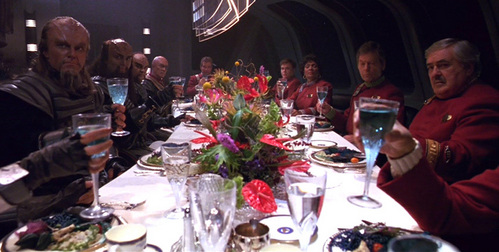 But soon into the voyage, the Klingons are attacked…by the USS Enterprise. Despite the shots being fired, all ammunitions on the ship are accounted for. How is this possible? Even stranger is that someone boarded the Klingon Bird of Prey and assassinated numerous members of the crew. Kirk and McCoy board the ship in an attempt to alleviate the situation, but are put on trial and ultimately sent to prison. It’s up to the remaining members of the Enterprise to figure out just who was really behind these attacks and free the Captain from imprisonment.

The great thing about Star Trek is that, really, there seem to be no rules. There is nothing that you seemingly cannot do in a Trek movie. We’ve seen a comedy; we’ve seen a version of 2001: A Space Oddysey with Vulcans. Now, we have Klingons quoting Shakespeare and an investigation into racial prejudice in space. Though the locations and species are much different than what we may find on Earth, there is a high degree of relatability. The human element is very strong; as Kirk eventually tells Spock, humanity is not necessarily a species. It’s how you treat one another.

Though moral standpoints have often been explored in Star Trek, this seems to have a lot more disastrous consequences for the crew. In The Undiscovered Country, Captain Kirk and many members of his crew are the perpetrators of prejudice in this film, but maybe I’m sugarcoating the situation here. The proper term would be racist.

With the current state of American politics, this installment of the Franchise Files could not have come at a more appropriate time. What are the lengths that people will go with misinformed prejudice? What are the consequences of racism, whether or not you think it’s unfounded or not? 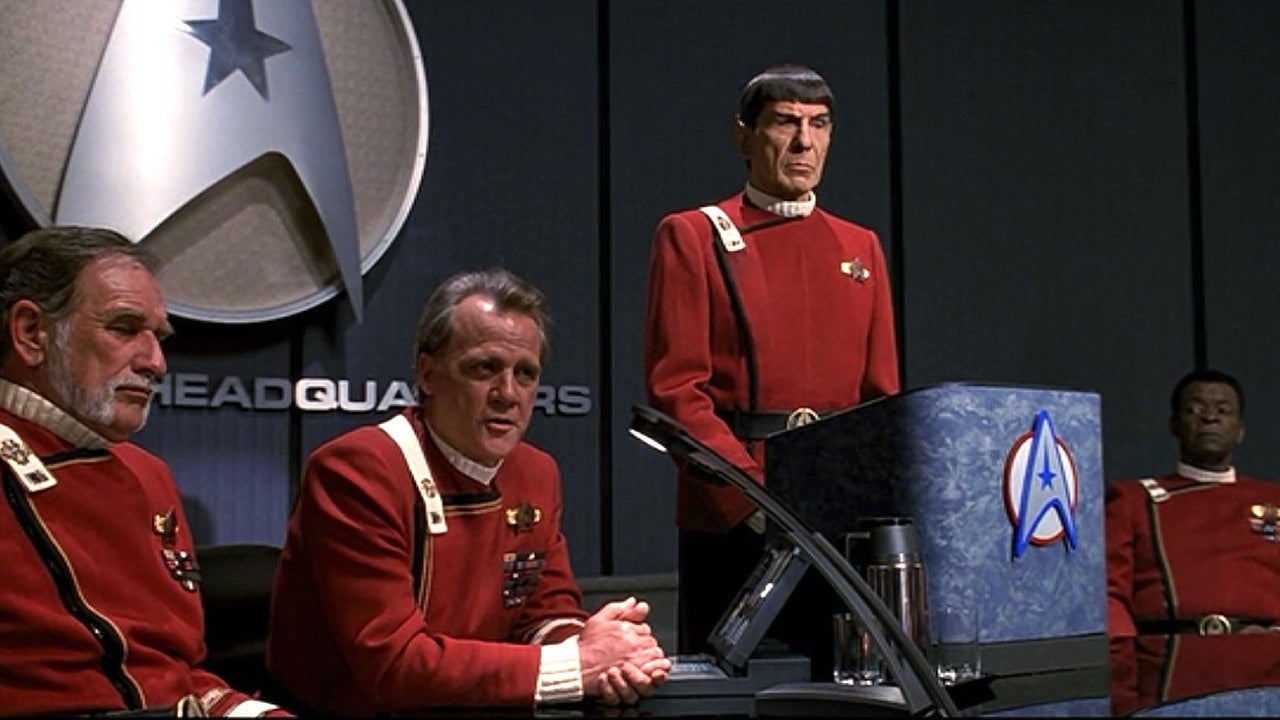 This is Star Trek, and so, most understandably, the consequences are not too dark. And being that this is Star Trek, there’s a happy resolution and understanding at the end of the film. But real life is not always this way. If there is anything to learn from The Undiscovered Country, it is that even the greatest of heroes can fall victim to their own prejudices. A lack of compassion towards other races is never the way to go.

Underlying messages aside, The Undiscovered Country is an excellent way for the original cast to be sent off. All members are represented in a way that gives them purpose and meaning, and it’s excellent to see Sulu (George Takei) finally coming into his own and commanding his own ship. In fact, the opening of the film is with him in the captain’s chair aboard the USS Excelsior. An even better piece to the film is the way in which the characters realize their place in the world. Spock, on reflecting on his age and his time served with Starfleet asks Kirk if it is “Possible that they have outlived their usefulness.” They both, throughout the film, become victims of their rigid views on how they perceive the world, while on the outside, things change. The galaxy expands and new ideas are brought forth. Resistance to this fact is futile. The decision to have these characters become self-aware is something that is sorely missed in the modern age of sequels, threequels, and so on. After six films, sadly, it’s time for the original cast to make some room for new blood.

At the end of the film we see each of the cast’s signatures flash on the screen. It’s a loving tribute to them and their work if I’ve ever seen one. Though it’s sad to see them go, in knowing this is the last film to feature all members of the original series, as I’ve already stated, change is what makes the world go ’round.

Though William Shatner will return to the silver screen as a guest in another Captain’s trek, most of the cast will never don their ever-changing Starfleet uniforms again. Spock will return, but it will not be for a great number of years. Sulu, McCoy, Scotty, and the rest of this wonderful cast will retire from their characters, ushering in a new generation.

Fitting, then, that the next chapter in the series is called The Next Generation. A little “on the nose”, don’t you think? The Undiscovered Country remains one of the best films that Star Trek has to offer. It’s wonderfully shot, directed, and scripted. For fans who want to see nothing more than a host of aliens and strange environments, Undiscovered Country is for you, as well. The great thing about this series, as I’ve stated, is that most of these films can be watched by anyone. You don’t need to be a fan of the characters or need to know about their backgrounds, though it helps make sense of phrases such as “Kobayashi Maru.” Though, it certainly does help.

As we close the chapter on the first phase of Star Trek, I think it’s important to state which ones I enjoyed the best. Though it may be controversial, I do believe that in terms of entertainment, the fourth installment is my favorite, followed by The Final Frontier, which I know many have hated. Third would come between this, and the Search for Spock. While many have claimed The Wrath of Khan as their personal favorite, I have never been able to fall completely in love with it. In my opinion, all are good films. Try one. You just might like it!

The Star Trek franchise will continue on with a different crew, headed by Sir Patrick Stewart. Stick around to join me in my trek on the Franchise Files on the Geeked Gods!