Moral concepts have always been vital to Star Trek. But every so often, the implications and reasonings behind these moral concepts fall short. In the case of Insurrection, nearly everything about the situation... 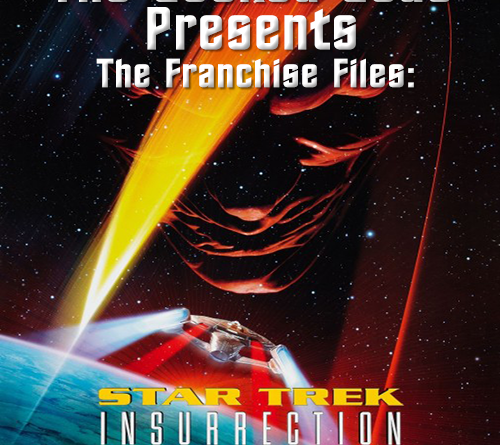 Moral concepts have always been vital to Star Trek. But every so often, the implications and reasonings behind these moral concepts fall short. In the case of Insurrection, nearly everything about the situation feels cardboard and undercooked. And while many science fiction films are able to succeed while suspending disbelief, it’s kind of hard to do that while the moral issues aren’t believable or understandable in the slightest.

Insurrection provides a serious dilemma because it explores an idea that appears to false that much of the cast seems to be powering through it for the sake of the project. As Spock once so eloquently stated, “the needs of the many outweigh the needs of the few”. In this instance, we can see the entire cast struggling to tell a convincing story that they don’t even seem to believe. Add in a couple of pimple and breast jokes and you get a film that I really shouldn’t have enjoyed, but actually did, somewhat. It’s sort of like laughing at an annoying younger brother that you’re trying really hard to be serious with.

In the ninth Star Trek film, the Ba’ku are a race of 600 people who inhabit a planet whose rings allow them to stay youthful and healthy. The planet heals wounds and helps older beings to revert to a physical and mental age of when they were at optimum health. The Son’a, a race of deformed and deteriorating beings, wish to secretly transport the Ba’ku race and use the planet to help their own species – which happens to be substantially greater in number than the Son’a. In addition, Starfleet Admiral Dougherty (Anthony Zerbe) is in league with the conspirators, aware that it would be mutually beneficial for both of their people.

But Picard and company are against this. Fair enough. Why should we kick these people out of their home just because others want it to? Harnessing their resources and taking what is rightfully theirs is wrong. However, that shouldn’t be the issue here.

The Ba’ku have been enjoying immortality and all of the planet’s benefits for hundreds of years. In that time, they’ve forsaken traversing the galaxy and shunned the use of technology because they are too advanced for it. In becoming advanced, somehow they have forgotten how to not be condescending to outsiders. After centuries, they’ve not learned how to share, either.

Let’s just do the numbers game for a quick moment. There are 600 people currently living on this planet. Less than a thousand on a whole planet. Why is no one else permitted to live there? I don’t care for the Ba’ku’s reasoning for this. Any way you’d like to interpret it, it’s ridiculous. The entire problem in this film is a non-issue. It’s called sharing. Sharing! You know, that thing most people learn when they come out of the womb? It’s not a hard concept.

One could argue that it’s no one’s right to decide how a culture decides to use what is rightfully owned by them – and that’s correct. Forcing them to adapt otherwise would be an act of war, which the instigators are committing. The bigger issue is that if this race is so advanced and intelligent, how are they not able to come to a mutually beneficial agreement?

At the conclusion of the film, the reason for this becomes clear. Still, it’s not a reason that seems to hold much water. It’s so one-dimensional that the film is hardly able to stretch it out into a usual length for a Star Trek film. Insurrection is short – and it feels short, too. It feels rushed and silly.

Yet, despite all of this, the film is painfully enjoyable. It’s silly – sure. And I have very big issues with this problematic story; it just doesn’t seem to be justifiable enough to constitute a full film. For anyone besides the biggest Trekkies, this film is going to bore you to certain death. I could not see anyone besides someone who is completely wrapped up in the lore of this fictional universe finding this movie interesting.

Even more confusing is that Insurrection was written to be in stark contrast to the action and darkness of First Contact.

So, to clarify, Insurrection intended to go in a clearly different direction than one of the most acclaimed Star Trek films in many years. Can someone explain this to me? How was this supposed to make sense and not come out being a disappointment? If you’re a Star Trek completist, I would recommend that you watch this film only to say that you’ve seen them all. For all others, if you’re not a huge fan of Patrick Stewart, you’re going to be asleep within ten minutes of this film.

The Franchise Files continues next week with the last Star Trek film before the reboot, in Star Trek: Nemesis. Tom Hardy will be there, and he’ll look like a child! Bane who? That’s not him, it couldn’t be! Oh, but it is. It is! You’ll see, just stick around!