Picard once again comes face to face with his greatest nemesis, the Borg. 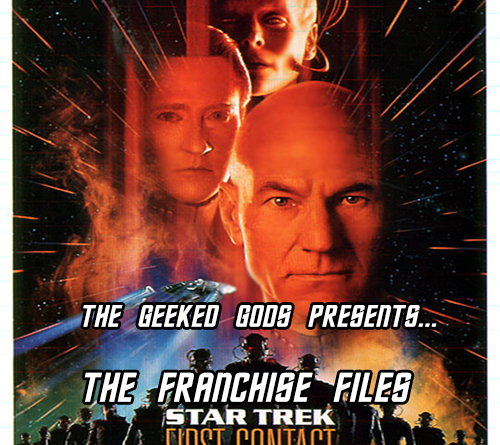 I’m much more acquainted with the films including the original cast of Star Trek. Watching Generations only a few weeks ago reminded me as to why; there just didn’t seem to be the same power in the films of the newer Star Trek cast. And so, with Generations in mind, I went into 1996’s First Contact without very high expectations. This is one of the few that I’ve only seen clips from and nothing from the film had been able to stick with me. That’s usually a sign of a less-than-stellar film.

And, as usual, I was proven extremely wrong in my initial assessment.

First Contact, directed the franchise’s very own Jonathan Frakes (Commander Riker), is one of the series’ best. Not just for the films featuring Picard at the helm, but for all of the Star Trek films. First Contact is just so good. I can’t say it enough. I feel like an annoying girlfriend – but I sort of like it feels. Are you judging me?

The first film without any of the members of the original series, First Contact is the ultimate showdown between Picard and his greatest foe, a cybernetic organism with a collective consciousness called the Borg. In an attempt to repopulate the earth with their own species, they travel back in time to prevent man from making first contact with an alien species. On April 5th, 2063, Zefram Cochrane (James Cromwell) will embark on a warp flight and encounter extraterrestrial species. After this, the world will know peace.

To circumvent this, the Borg travels back to April 4th in an attempt to stop this from happening. But Picard (Sir Patrick Stewart), much like Captain Ahab, is in unrelenting pursuit of his white whale – the same species that almost destroyed him in an earlier episode of The Next Generation (“The Best of Both Worlds”, a two-part ordeal starting with the last episode of season three and the first of season four).

The Borg may just be the most evil of all the enemies in Trekkie fandom. They are no two ways about it; while the Klingons and Romulans have their reasonings for their strained relationship with Starfleet, the Borg only want to assimilate all beings into their own race. And rest assured, they will do their best. “Resistence is futile” indeed.

This enemy is scary, not just because of the way they behave. Their character design is much more refined than when they appeared in the show. And if the common Borg wasn’t scary enough, the queen is downright chilling. Played by Alice Krige, she looks like something straight out of a horror film. They successfully assimilate numerous members of Picard’s crew, and when all is said and done, it’s definitely the most disturbing Star Trek film yet.

While the story is a bit confusing, there was an excellent decision made in creating a flashback sequence in the beginning of the film to clue you in to why exactly Picard hates the Borg so much (well, besides the fact that they are just plain mean, but that’s besides the fact). Instead of showing audiences what the crew has been doing in between films, the scenes of Picard’s struggle with the Borg helps to set a thrilling tone for the rest of the film. It’s surprisingly easy for anyone to get into the film – not just hardcore fans of the show.

Another excellent decision was to portray Jean-Luc as more of an action hero this time around. Having an enemy so hated as the Borg makes this transition seamless and not forced in the slightest. In fact, having him react to this situation in his usual calm demeanor would have felt much more out of place. He is unrelenting against this enemy and wants nothing more than to see them destroyed. The overall feel of the film is outside anything we’ve seen thus far in the world of Star Trek, but it works. After Generations, the series needed a serious overhaul. This seems to be just what the world of Star Trek needed. If nothing else, First Contact proved once and for all that the cast of The Next Generation is competent enough to stand on its own, no Kirk needed.

If there is anyone who is still able to doubt Sir Patrick Stewart’s power as a Star Trek lead after this film, I would be extremely surprised.