The final frontier here is not space - instead, it's something bigger. It's God's place of dwelling.
by Paul Aloisio October 28, 2016

The fifth installment of the cinematic Star Trek features has been met with less than stellar reviews since its release in 1989. As for me, I can’t understand why. The Final Frontier, to me, combines some of the best aspects of all the films so far into one highly satisfying package.

The final frontier here is not space – instead, it’s something bigger. It’s God’s place of dwelling. It opens up on the planet of Nimbus III, better known as the “Planet of Galactic Peace.” A rebel Vulcan has taken three ambassadors from the United Federation of Peace hostage in an attempt to seize a space vessel capable of taking him to the land of Sha Ka Ree, the Vulcan equivalent of Eden, in hopes to find God. This lies beyond the Great Barrier in the center of the Universe. This Vulcan, as it turns out, is Spock’s brother Sybok (played by Laurence Luckinbill).

In the meantime, Kirk and company are enjoying time off on a simple camping trip. But once the transmissions of Sybok’s actions come in, the crew are called back to duty in order to rectify the situation. At the same time, a Klingon attempting to kill Kirk in order to prove himself as the greatest warrior in the galaxy pursues Kirk. It’s fun stuff, really. 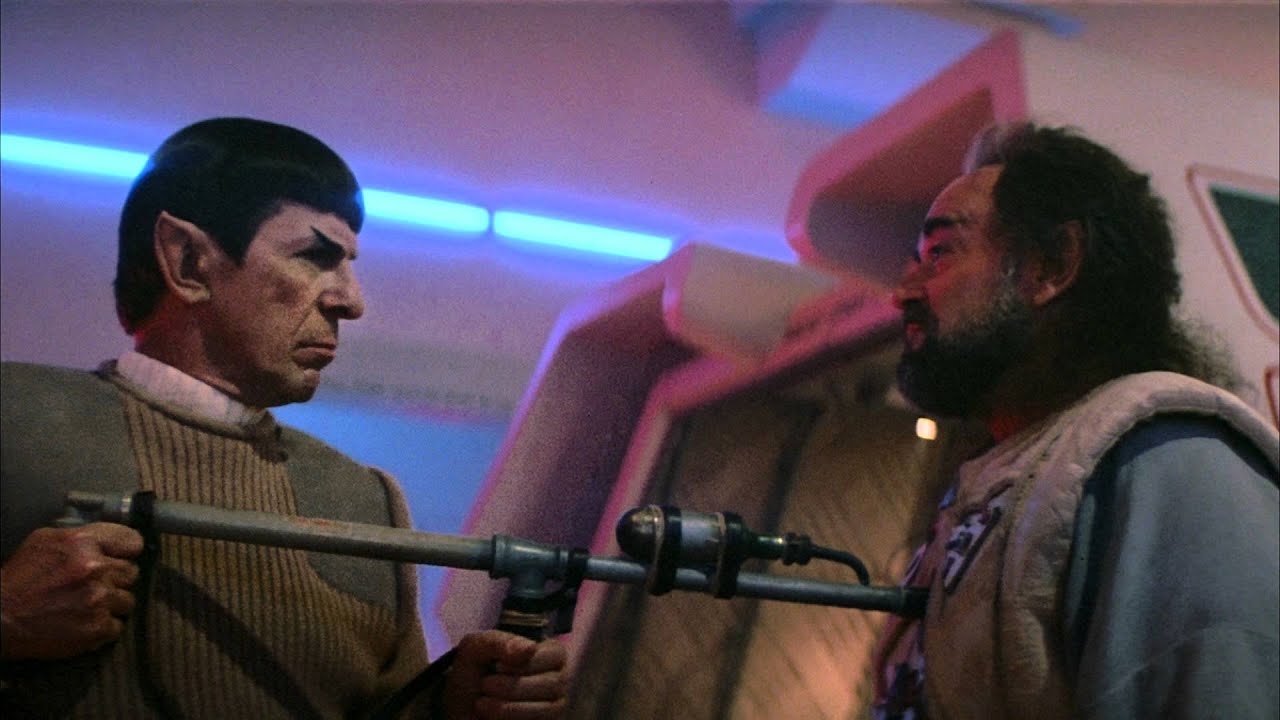 Directed by Shatner, the film takes a heavy comedic influence from its predecessor. Though it’s not a straightforward comedy like The Voyage Home, the humor is abundant in this film. Don’t be mistaken, though: there’s a lot more action this time around. It feels very much like a cross between The Wrath of Khan and Voyage – a humorous yet action-packed film, featuring one of the best antagonists that Star Trek has to offer.

The character of Sybok is a complex one. He’s a cultist, yes, but is he really a bad guy? Or is he doing what he thinks is right? He appears sinister, but in the end, he may just be a bit misguided. A Vulcan driven by passion instead of logic, the character seems like a renegade messiah on the verge of insanity. Sybok is a great villain because, much like Khan, he’s multidimensional. Khan was driven by hatred and blinded by pride; here, Sybok is on a mission to find God. As they say, “The road to Hell is paved with good intentions”.

Final Frontier benefits heavily from the most impressive set design in a Trek film thus far. Say what you will about the film, but the Enterprise, as well as the Klingon Bird of Prey, looks great. Undoubtedly borrowing from the interior designs of the vessels found in Star Wars, everything looks much more natural this time around. Even the computer interfaces get an excellent makeover – it’s the best that the Enterprise has ever looked.

“What does God need with a starship?”

The action is good, the story is great, and the relationship between Spock, McCoy, and Kirk, is dynamic and entertaining as usual. A complaint I may be able to understand is this one, and that the rapport between the three of them is a little lighthearted. But come on – if you’re watching the fifth movie in a franchise that’s heavily focused on the three main characters, you can’t be so serious all the time. Furthermore, if you don’t like the characters, but you’ve stuck around for the fifth film, then why? There’s a lot of hamminess by Shatner here, and it’s probably due to him directing the film as well. Yes, there’s a “Row, Row, Row Your Boat” singalong, but it’s all in good fun. The hamminess is what makes Shatner so appealing, after all!

When all is said and done, this is probably my most-watched Star Trek film. There’s a great mix of everything here – science, morality, religion, and humor. It’s worth watching for the dialogue by Spock by a campfire alone.

It hasn’t fared too well with everyone, though. Upon its release, it wasn’t greeted with much praise. It also currently holds a 22% rating on Rotten Tomatoes. The Final Frontier didn’t bust the bank by any means, but it was only three million short of doubling it’s 33 million budget. I can’t wrap my head around the criticism. Which is funny, because I can usually understand both sides of the argument. Maybe I’m just blinded by my love of Spock.

The Franchise Files will be back for one final installment of the original cast of Star Trek in The Undiscovered Country. It’s not dead yet, Jim!

Ray Bradbury’s ‘The Halloween Tree’ is an Overlooked Classic