The most recent Star Trek film is an absolute blast. 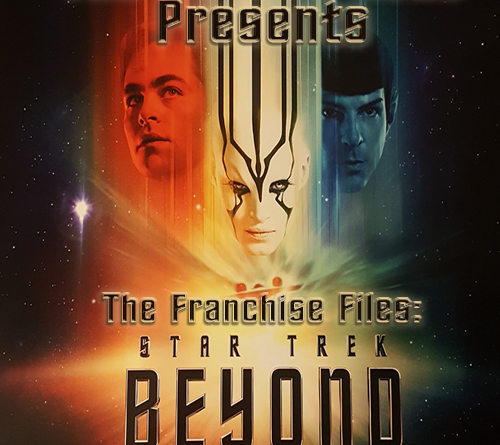 How wonderful it is for it to be able to review a new Star Trek movie in 2017 that was released less than a year ago. Even better is the fact that it’s the best one out of the three reboots so far. Live long and prosper, indeed.

Star Trek Beyond feels like releasing a breath of tension that you’ve been holding in for two whole movies. Finally, at long last, it feels as if the entire ensemble is starting to feel comfortable in their roles. Not only that, but we get more than a few snippets of humor – with some jokes that only true Trekkies will understand. At long last, it doesn’t feel like “just a reboot.” It’s very much a new Star Trek story, one that I can accept for what it is.

And what I mean by that is this: the first two films felt overly commercial, thanks in part to Abram’s pop culture directorial style. I am a fan of the man’s work, but his shooting methods – aggravating lens flares and all – look like a very long music video. Extreme close up! Explosion! Lens flare – no, wait, let’s do a motion blur! Speed up the pace, because viewers don’t care about character development! Instead, Justin Lin takes a more conservative approach to the camera. It gives the viewers and the characters both a chance to breathe.

I also mean that it appears that the actors are now comfortable enough with the characters they are portraying to loosen up a little bit. I can now accept Zachary Quinto’s portrayal of an emotive Spock. I don’t have the reaction of, “Spock wouldn’t do that!” – because it’s quite clear that this particular Spock in this particular timeline would. Not only that, but the ensemble as a whole seem to be comfortable with working together. The dynamic between Kirk, Spock, and McCoy felt stiff and manufactured for the most part of the first reboot, and didn’t get enough attention during Into Darkness. In Beyond, however, Chris Pine delivers a performance full of bravado, humor, and wits, complimented by the brotherly bickering of Quinto and Urban (as Spock and McCoy respectively).

Simon Pegg returns for an energetic performance of Scotty while also co-writing the script with Doug Jung. Pegg’s delivery of the character has never been questioned by me – as goes for Pine – and I am happy to see him take the reigns and provide a new story for the Enterprise. While it is decent enough, Beyond’s story still doesn’t seem to have much of an underlying theme. However, I will take this at face value due to the strength of the character performances in Beyond, because, as if you couldn’t guess already, I am ecstatic about them finally coming into their own.

Kirk is bored with the life of a Captain. As a nod to Trek’s origins, he calls it “episodic” as he looks into his wardrobe to pick out which of the same yellow uniforms he will be required to wear today. This is a character that after three years on board as a captain still has enough angst to feel unfulfilled with traversing throughout space. He’s still figuring himself out. As for Spock, he is dealing with an entirely different crisis – his own mortality. In a way that gives not only Spock Prime closure but Nimoy himself, Quinto’s Spock learns of Spock Prime’s passing. Coupled with the fact that the planet Vulcan is no more, he begins to wonder what he should be doing to serve his race and his ancestors before him. While Kirk deals with his situation, the Enterprise recieves a distress call from a planet very far outside of the Federation’s reach. Once there, they will have no communication with the outside world. But – now this is an action movie, remember – this is a ruse. They are ambushed and quickly taken over. The crew faces off against Krall, played by Idris Elba, a being who feeds off of other beings to sustain his own life. Kirk and company make their way in a destroyed Enterprise to the planet, and there they find Jaylah (Sofia Boutella), living in an older Starfleet ship that has broken down. She is the resistance; together, Jaylah and the rest of the crew must stop Krall.

On the subject of Nimoy’s passing, the way Beyond handles this blew me away. Nimoy’s legacy is expressed here in a quiet, wordless display of appreciation, complete with a photo of the entire original crew towards the end. I don’t think Nimoy would have wanted a dragging scene of exposition – after all, he would have questioned what it was actually doing for the character. Instead, the film handles it with finesse and respect.

I will also applaud the film heavily for having a distinctly different tone than the previous two. The setting and the battle sequences, coupled with the appearances of the alien race that the crew must face off against in the film seems to harken back to First Contact, of which I was a big fan of. The enemy here is grim and unrelenting; Idris Elba does a great job at portraying Krall, though he hides behind a heavy prosthetic mask. No, it’s not a particularly deep story, and it’s not exactly unique either, but it is satisfying nonetheless. I somberly admit the fact that we will never see another Star Trek film like The Voyage Home, and I also accept the fact that I do not think any of the writers have it in them to handle tragedy like Spock’s initial death in The Wrath of Khan, but I will wake what I can get. Frankly, I think that the newest incarnation of the film series is a direct reflection of the times we are living in – they are flashy, loud, and energetic – and I accept this as well.

After all is said and done, not every Star Trek film has been particularly great. But if Beyond is any indication of things to come, I believe we are in strong hands. However, a sadness remains despite my deep optimism for the franchise.

After the film’s filming had concluded, Anton Yelchin, who consistently delivered a stellar performance as Chekov had passed away in a freak accident. This is a shame on so many levels; for one, he was a very talented young performer with a bright future ahead of him. And for the Star Trek Universe, I am not sure that I would prefer any other actor than Yelchin to portray Chekov. Only time will tell.

This concludes the Franchise Files for STAR TREK. It’s been a long and enlightening journey. What’s next, you ask? Oh, something much, much different. Something much…bloodier. 1, 2, Freddy’s coming for you…

5 Scariest Games of the last 5 Years