Super Freddy? Sure, why not. Can't you feel the enthusiasm!? 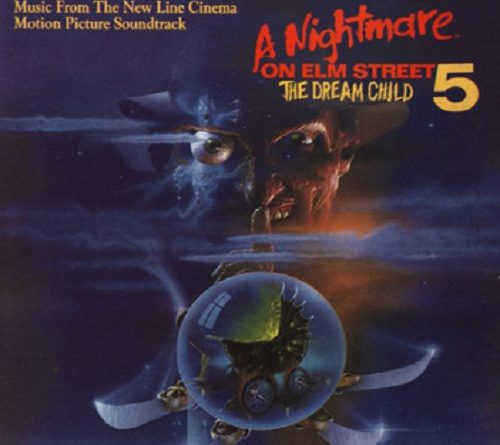 The original A Nightmare on Elm Street film opened up a world of promise for the horror genre as well as a world of confusion for later sequels in the franchise. Part of what made the first film so great – the bending of reality, the cartoonish, gory dream sequences – would open the door for things to get very, very surreal. Sometimes too surreal. The fifth installment, The Dream Child, is a perfect example of this.

With so many extravagant death sequences, the fifth film’s story gets a little glossed over and lost in the mix. In what will end up being nothing more than a vehicle for some spectacular and haunting effects, the story of The Dream Child makes little sense. For better or for worse, it barely attempts to. At this point in the series, New Line was intent on pushing out Freddy movies each year to keep the franchise healthy and stuffed full of profit. Whether this would hamper the story of the villain was inconsequential.

It’s not that ANOES 5 is a bad movie. It’s really not; though it’s confusing, the effects are fun to watch. But it really doesn’t go any deeper than that, although there are times when it desperately wants to. One would have to posit that fitting so many outlandish death sequences and a compelling sense of drama would be hard to do in 90 minutes and with only around a year of production time. Deadlines first; depth second. But profit, yes, the green stuff! – overrides both.

Alice (Lisa Wilcox) and Dan (Danny Hassel) have been living a happy life busy with graduating high school and getting a little jiggy with it after the events of the previous film. Freddy hasn’t made an appearance since he killed pretty much all of their friends and Alice defeated the villain with her supernatural soul powers. However, this changes when Alice becomes pregnant. Through her unborn child, Jacob, Freddy is somehow able to come back through the fetus’ dreams and resume his reign of R.E.M. torment once again.

Freddy begins his killing spree, feeding Jacob his harvested souls. How this makes any sense, I do not have any idea. Even more confusing is the lack of Alice’s powers, which were the key to defeated Freddy the last time around.

There is some real potential for an emotional subplot between Alice and her alcoholic father (Nicholas Mele). The man is shamed and defeated, afraid to embarrass his daughter by even showing his face at her graduation. Once Alice’s pregnancy is revealed, he responds not with anger but with tender support, giving a believable and poignant performance. He grieves the loss of his other child, who was killed a movie earlier, and hopes that the new baby will take his heartache away.

Unfortunately, his role never really grows from there. It’s a great scene, one that seems to foreshadow later events – a possible redemption for him, perhaps? – but does nowhere.

Instead, The Dream Child focuses more on bigger, more insidious and complicated effects. Robert Englund begins to get really comical and have the time of his life with this role. He gets to play both a demonic butler and an evil motorcycle. Then, of course, we have the infamous Super Freddy sequence, in which the movie is turned into a black and white live-action comic book. “Bitch” becomes a staple in his vocabulary, becoming comical and iconic for the character.

It is all very silly, really, but it’s fine enough for an afternoon movie where you can’t find anything else to do. It’s not painful to watch, and it’s certainly not the worst movie in the world, but the movie as a whole tells a story that just doesn’t seem to make any sense. This wouldn’t be a problem if it didn’t attempt to. The Dream Child, and most other films in the franchise for that matter, has to keep on coming up with new ways to bring Freddy back. These ideas get more and more complicated – but a belief in Freddy is what gives him his powers in the first place. Wouldn’t it make more sense to just use that as a tool for resurrection?

The Dream Child is an alright movie, but it suffers from franchise fatigue. Whereas the Friday the 13th series knew that the key was to keep it simple (until about the eighth film), Freddy’s team perhaps thought that making things more and more complicated would keep the series going strong. From a financial perspective, it worked fine enough. But from a fan’s perspective, things were getting tiresome.

Things will turn around for Freddy soon, but we’ll have to wait until after one more film for a serious change in direction for the franchise. Stick around, bitch!