Found-footage from George Romero? Yes, that was a thing ten years ago. 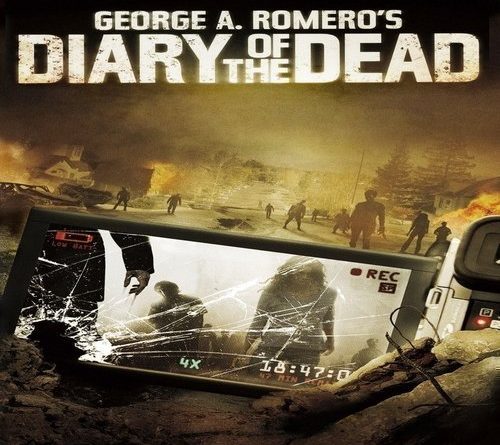 Romero has always been one for getting a message across in his movies. But in Diary of the Dead, released in 2007, it feels like the message is much more important than the entertainment value of the movie. It’s different, that’s for sure, but it’s absolutely the weakest entry in the franchise.

Diary follows a group of film students from the University of Pittsburgh as they witness the beginnings of the zombie apocalypse and proceed to film it. And that’s really the whole plot; the story doesn’t go anywhere interesting besides some of them die and some of them live. The film consists of a documentary made by the students, making it stand apart stylistically from the other films in Romero’s Dead saga, and it’s an interesting concept. It’s just not executed very well.

The film states all-too-often that the public’s fixation on the internet and social media (then just MySpace) is partially to blame for the end of the world. While the apocalypse arrives, we’re too busy filming it and posting about it for likes or views. Which, you know what, I sort of agree with. I do think it’s a great point and I do think that the majority of us could benefit from scaling back our social media consumption; ten years later, it’s even more than Romero probably could have imagined during Diary of the Dead’s filming.

But here’s my whole issue: Jason (Joshua Close), the main filmmaker of the bunch, is using his powers for good. He hopes that by uploading his experience to the internet, the information can spread quickly and the population can learn from his experience instead of the incredibly biased media, who are already making the situation to be about other things like illegal immigration (which is also a little too prophetic). In this act, then, social media has the potential to be a saving grace for mankind.

Romero seems to resist this idea, however, and it’s not until the very end until Jason’s girlfriend Debra (Michelle Morgan) realizes this. It literally takes Jason’s death until she comes around to the idea; before then, the camera is seen as a disease, an addiction, a sick compulsion. Yet Jason’s intentions are pure and apparent from the beginning, so the choice to have the other characters resist Jason’s mission so adamantly is a strange and clumsy one on Romero’s part.

I wouldn’t say that Diary of the Dead is a disaster, however. There’s actually a lot of really good meta humor contained within, especially during the beginning when the students are filming a horror movie and debating whether or not the creatures should move slow. Romero, obviously, thinks they should lurch towards you, and he hands it off for the characters to explain this concept to the audience, an obvious and hilarious jab at how the filmmaker sees the current state of his creation. The man was never a big fan of most current zombie films (he detested World War Z, The Walking Dead, and was not a fan of the Dawn of the Dead remake), and put that distaste in his own films. That’s a power move without a doubt.

I’d recommend the film only to those who are Romero completionists and would like to see a different style of filmmaking from him. For everyone else, I think the movie would come off as a little dull. But you know what, that’s perfectly fine: the father of the zombie film as we know it is allowed to make a couple missteps. He created the genre, after all.