The Franchise Files returns this week with Romero’s third installment in his Dead franchise, trading in neon pink blood for something much more dark and repulsive. Originally intended to be the Gone with... 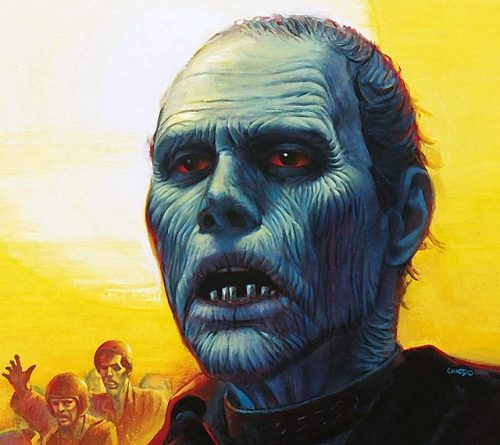 The Franchise Files returns this week with Romero’s third installment in his Dead franchise, trading in neon pink blood for something much more dark and repulsive. Originally intended to be the Gone with the Wind of zombie movies, Romero’s Day of the Dead was conceptualized as a sweeping horror epic, but what he ended up producing was something much smaller. This is considered to be his last great horror movie by many horror fans. Others, such as Robert Ebert, rejected the movie upon its release, giving it a measly 1 and a half stars after giving Dawn of the Dead a perfect score in 1978. At this point, Ebert wrote, Romero should “quit while he’s ahead.”

While Dawn included many fun moments, Day of the Dead is very much a humorless, bleak film. The previous movie took place only a few small weeks into the zombie apocalypse; here, much more time has passed. The dead have overrun much of the earth, and in an underground bunker, a small group of military men and scientists debate whether or not they are the only ones who have survived. They haven’t had any contact with the outside world for quite some time and tensions are coming to a boiling point. Just about everyone trapped in this dimly-lit underground facility is ready to explode – and the abundance of weapons makes the situation that much more fragile. Interestingly enough, the zombies are not the antagonists in this film. It’s the military faction, led by Captain Rhodes (Joseph Pilato), who are the real danger. They’re a group of vicious meatheads who take too much pleasure in killing and have no use for scientific advancement. On the intellectual front, Dr. Srah Bowman (Lori Cardille) is working with lead scientist Dr. Logan (Richard Liberty) to conduct extensive experiments on the dead by capturing them and attempting to domesticate them.

Throughout the film, we see tensions rise until eventually exploding; the movie is very much about the fall of society in an enclosed, tense environment. A lack of compassion gives way to destruction in the most horrible of ways. Those who behave like animals end up suffering terrible fates, while (most of) those who were working towards a better future can pull through to give humanity a fighting chance. Most of the characters are not likable; they’re quite ugly in their words and actions. There’s no Ken Foree or Duane Johnson in this film, that’s for sure. The nastiness that Rhodes and his crew bring to the screen seems to overpower any of the likable qualities that Sarah’s faction possesses.

Romero pulls a wild card in the form of a domesticated zombie named Bub (Sherman Howard). Day of the Dead presents us, possibly for the first time, with a zombie that remembers bits of his past life and is able to show human emotions, such as remorse and sadness. Altogether, these ingredients make for the most unconventional zombie film ever made for the time being, which was more than likely the cause for some of the backlash.

Tom Savini’s effects work is much more realistic here than in Dawn, most notably the depiction of the blood. While the previous movie was most certainly disgusting, the pinkish blood effects gave the whole ordeal much more of a cartoony aspect. Here, the gore gives us the feeling that we are actually in Hell, witnessing humanity’s tragic last stand. There are many sequences in this film where, over thirty years later, I could feel my stomach get queasy, with the deaths of the military at the end becoming particularly realistic and disturbing. There are some things that you just can’t unsee. But if you’d like to…here’s a link. After, here’s a link of some puppies and babies playing together to wash the guts out of your mouth. See – I really am a nice guy!

Romero’s initial epic needed to be cut down due to budget restraints, and although I love this film, I can’t help but wonder what we would have gotten if he was able to secure his proposed $7 million budget as opposed to the $3.5 million he ended up receiving. Day of the Dead may not have the same notoriety of influence that his previous films did, but I don’t believe it’s due to this film being inferior. The simple fact of the matter is that Day of the Dead did not break new ground the way that Night and Dawn was able to. Instead, Day of the Dead serves as a fitting end to a trilogy depicting the end of the world.

In a stroke of genius, Romero chose to end this third film on a hopeful note. Sarah, along with two male friends, is able to escape. They are seen relaxing on a beach somewhere, safe from the plague of death that has afflicted the rest of the earth. They seemingly have a blank slate on which to start over, to rebuild. The second coming of humanity is placed in Sarah’s hands; what happens next is up to her.

It will take twenty more years for Romero to pick up and continue his Dead franchise, but in the meantime, it’s remake city! Tune in next time to see how the Night of the Living Dead remake, directed by none other than Tom Savini, put a new spin on a beloved classic!

Elsewhere #1 Review-Oh where, oh where has Amelia Earhart gone