Freddy returns to salvage his name after the disaster that was Freddy's Revenge in a screenplay that Craven himself returned for. 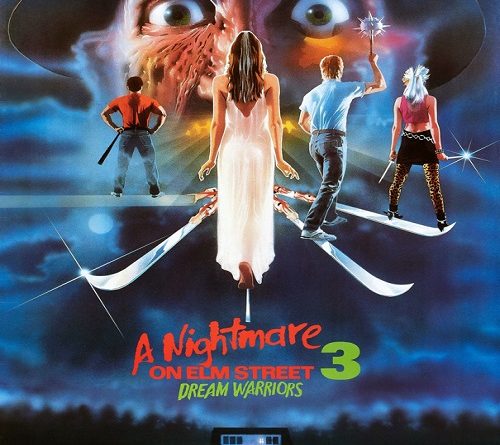 I’ve already discussed my utter contempt for the second film in the A Nightmare on Elm Street franchise. While it’s not totally surprising that the film was a trainwreck given the rushed production and lack of participation by Wes Craven, what is surprising is that the franchise was able to come back so strong. Some may say stronger than even the introductory film. And after revisiting Dream Warriors, released thirty years ago last month, that’s a hard point to deny. There’s no question about it; Dream Warriors kicks major ass.

While Elm Street 2: Freddy Got Fingered did well financially, New Line exec Robert Shaye acknowledged problems with the film itself. Thus, he took it upon himself to contact Craven to clean up this silly mess they’ve gotten Fred Krueger into and write another sequel that would be, well, good. Thankfully, Craven obliged.

The original screenplay intended for the film to be much more meta than it would end up as being. In a storyline that would not be explored until New Nightmare years later, the film would follow a group of teens filming a sequel to Elm Street. The story was scrapped, and instead, we wound up with The Breakfast Club on a bad acid trip. In a good way, of course.

Heather Langenkamp reprises her role as Nancy, now a young expert on sleep and the power of nightmares. We meet her at a psychiatric center for young teens, all of whom suffer from severe night terrors. Nancy is intent on helping these children, as she soon starts to realize that these night terrors are being caused by Freddy Krueger.

The film opens with the introduction of Kristen Parker (Patricia Arquette) as she experiences a dream in which Freddy causes her to slit her own wrists. She is found by her mother in the nick of time and is taken to the hospital where we meet the rest of this gang of social misfits. Nancy takes it upon herself to teach the kids how to use their dreams to fight back at Freddy, and they each learn their individual dream powers.

The first improvement to be found in Dream Warriors is that the cast is leagues ahead of what was seen in the second film. I love this group of teens; though they never really have time for their backstories to be fleshed out, they all have their own little quirks and differences to make them unique. All are likable and do a fine job in their roles – what may be most surprising, though, is that Langenkamp delivers the weakest performance out of all. This is painfully clear in a moment when she trades dialog with a young Laurence Fishburne (credited here as Larry Fishburne), who, even at the beginning of his career, shows just how great of an actor he is.

Poor as her performance may be, it does little to lessen the success of the film. Patricia Arquette nails her role as the Final Girl, bringing an honest and eager atmosphere to the screen. John Saxon reprises his role as Officer Thompson and delivers as always. Most memorable of all, however, is Penelope Sudrow, who will suffer a horrible yet slightly comedic death during her performance as Jennifer. “Welcome to prime time, bitch!”

Let’s be real for a second, though. No one comes into an Elm Street film hoping that the good guys are going to perform well. No; we want Freddy, and we want a Freddy who uses his powers to the fullest extent. Dream Warriors seriously delivers in this regard. Nearly every single kill has become iconic – possibly even more than any kill he performed in the original film.

One of these fantastically gruesome murders comes towards the beginning, where Freddy transforms from a small marionette hanging on the wall to a gigantic puppet master. He slashes the arms of an innocent teen and uses the poor kid’s veins as the strings to make his puppet walk all the way to the top of a tower and then jump off, which leads the staff at the hospital to believe he committed suicide. It’s a sight that is hard to watch; stomach-churning, for sure. 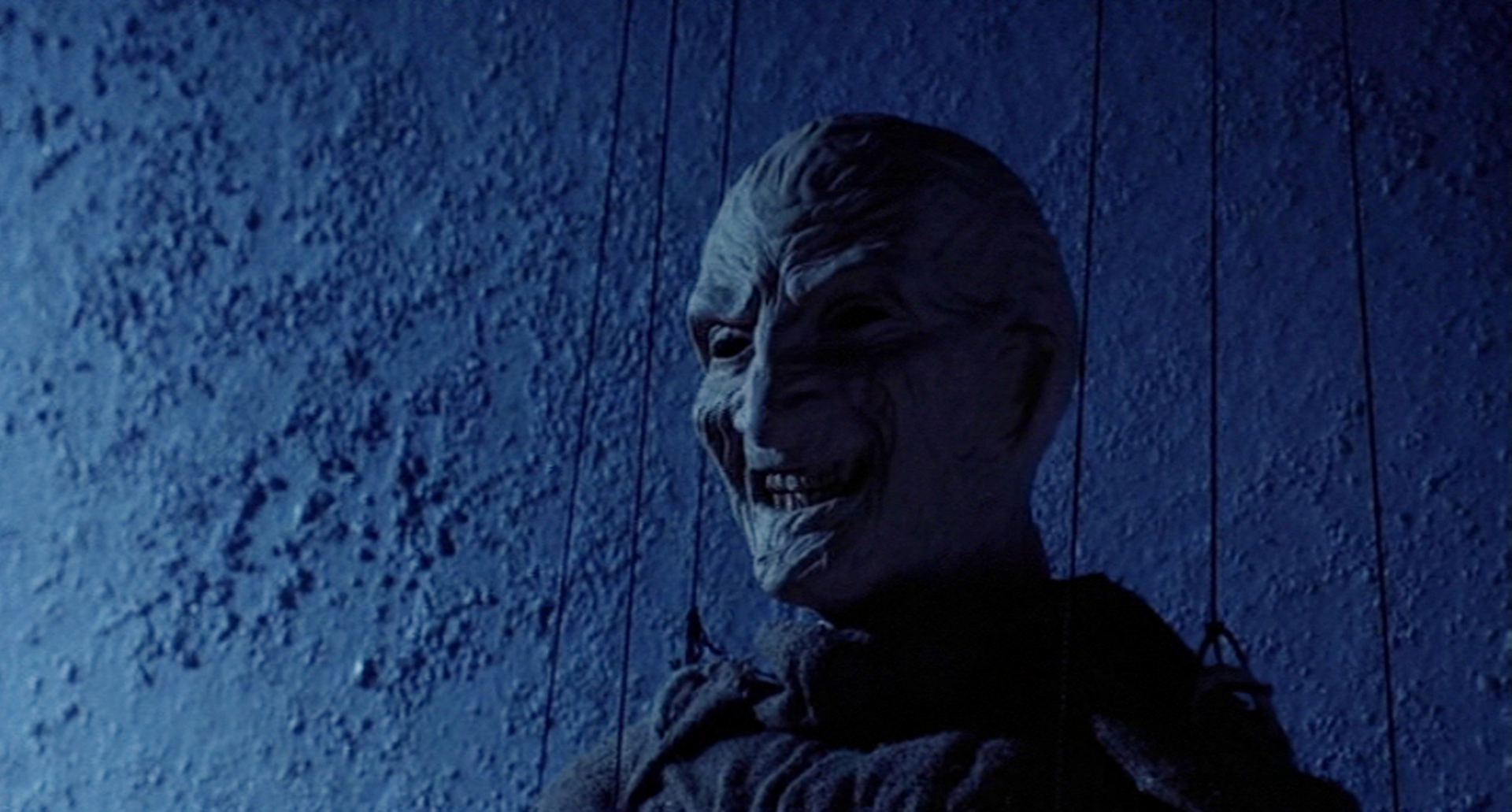 Dream Warriors delivers some phenomenal effects as well, taking full advantage of the fantasy element within this world. Krueger bends and manipulates reality, creating a world that is as bizarre as it is scary. We are even treated to a Harryhausen-esque scene where we see Freddy’s charred skeleton rise from the dirt and do battle ala Clash of the Titans.

What the audience already knew about the killer was horrifying enough, but the film deepens the horror into something of a tragedy. Here, we learn about Krueger’s birth. His mother, a nun, was locked up and raped hundreds of times. Once she was set free, she was pregnant. Thus, Freddy Krueger came to be: The BastardnSon of One Hundred Maniacs. It’s sickening. It’s gross. It makes the villain that much more menacing. Born out of tragedy, only to allow hatred and a lust for death consume both his life and afterlife. This is one sick guy, let me tell you.

Chuck Russell has a real eye for directing, as the film is shot extremely well and is carried by a fluid yet natural pace. We are able to delve deep into the world of dreams, creating a horror film that is totally surreal and terrifying. Yet, even in the midst of all this terror, we begin to see the origins of Freddy’s black humor. It’s not totally exaggerated yet, and he still retains a sense of menace and eerie mystery. This is something that I believe will be gone from the character eventually, but here it’s at the perfect level. Robert Englund is just right here; this could quite possibly be his best role as the iconic villain.

To top it all off, Dream Warriors boasts a score by none other than Angelo Badalamenti, who famously worked on Twin Peaks. The musical direction adds a sense of wonder to the scenes that are dripping with fantasy and bewilderment and adds a reasonable amount of tension to the scenes that are more gritty and marinated in gore. You can’t get much better than Badalamenti. Ask anyone who has watched David Lynch’s surreal horror drama; the theme is one of the most compelling aspects. Let’s not forget about Dokken, either; their theme for the movie is sure to get (annoyingly) stuck in your head for hours. There’s no cheese like 1980’s cheese.

Over the next couple years, we will thankfully get a few more decent films out of Krueger before things start to sour again. Craven, once again intending for this film to be the last for Freddy, will not return for a number of years. But that’s perfectly fine with me; I love Wes Craven and have immense respect for the man. He helped create a monster and subsequently helped it get back on the right track. Freddy’s bigger than just one person, though. He has become his own entity and the public’s hunger for the maniac’s slaughter is unsatiable.