Five Board Games to Play with Friends The Five By Five Challenge for 2017 Chris Palermo   With the 2016 5×5 Challenge successfully completed, thought turned to which games...
by Guest January 23, 2017

With the 2016 5×5 Challenge successfully completed, thought turned to which games would be included in the 2017 edition.

The process stayed the same. Each member of the Long Island Boardgaming Organization could nominate up to five games. Once nominations were closed, a secret poll was set up where all members could vote for up to 10 games (with the five highest being selected). In the future, if a game is selected two years in a row, we may remove it from the nominations for one year (although, honestly, with the amount of great games being released each year, that may become a moot point).

Here are the five games selected for the 2017 5×5 Challenge: 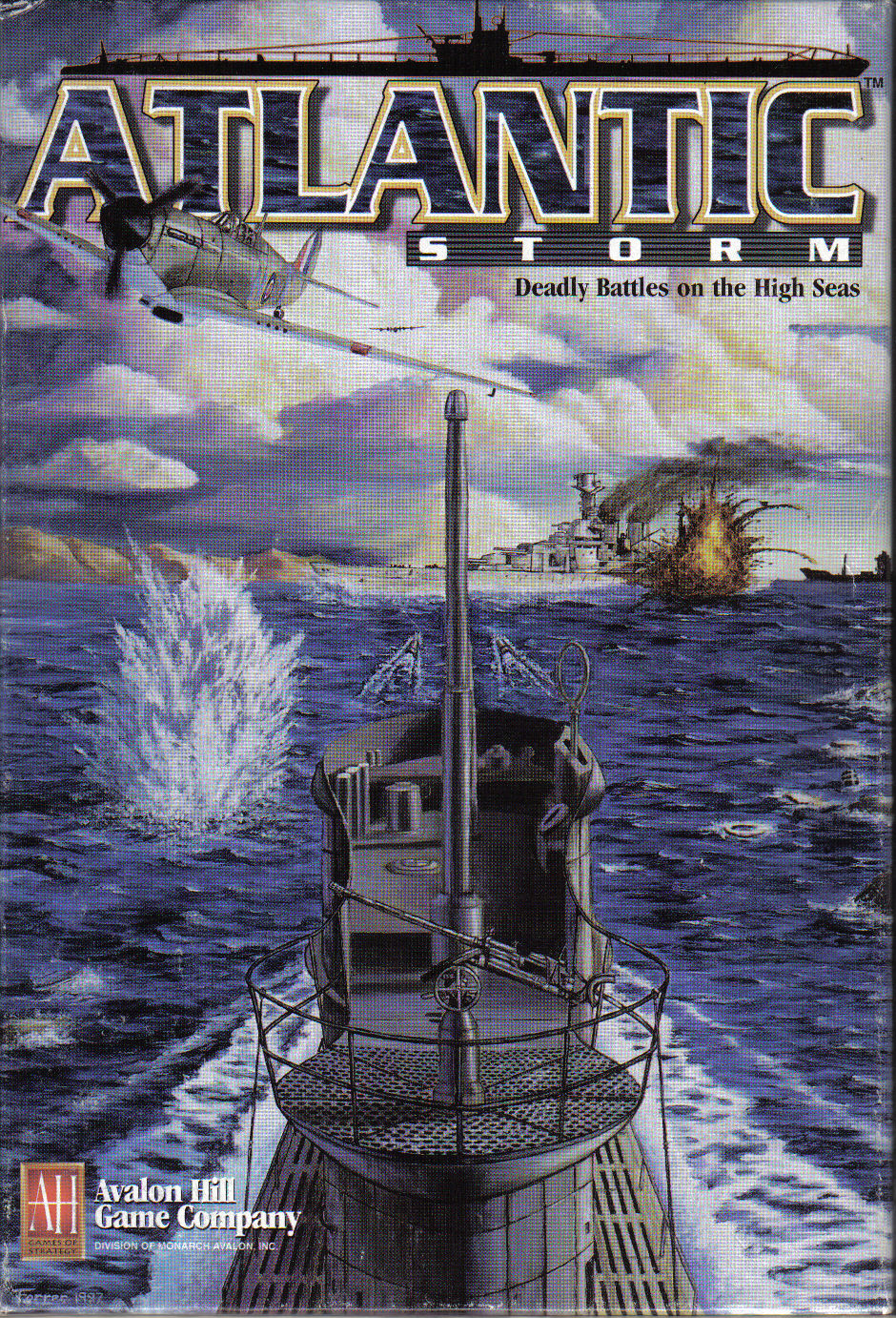 Publsher: Avalon Hill (out of print)

Atlantic Storm was one of the last games produced by Avalon Hill (which probably was*the* publisher that primed the U.S. audience for the level of popularity enjoyed by boardgames today). Thankfully, when Avalon Hill was purchased by Hasbro in 1998, publishers like Rio Grande Games and Mayfair Games had established a market in the U.S., and things have continued to grow since then. 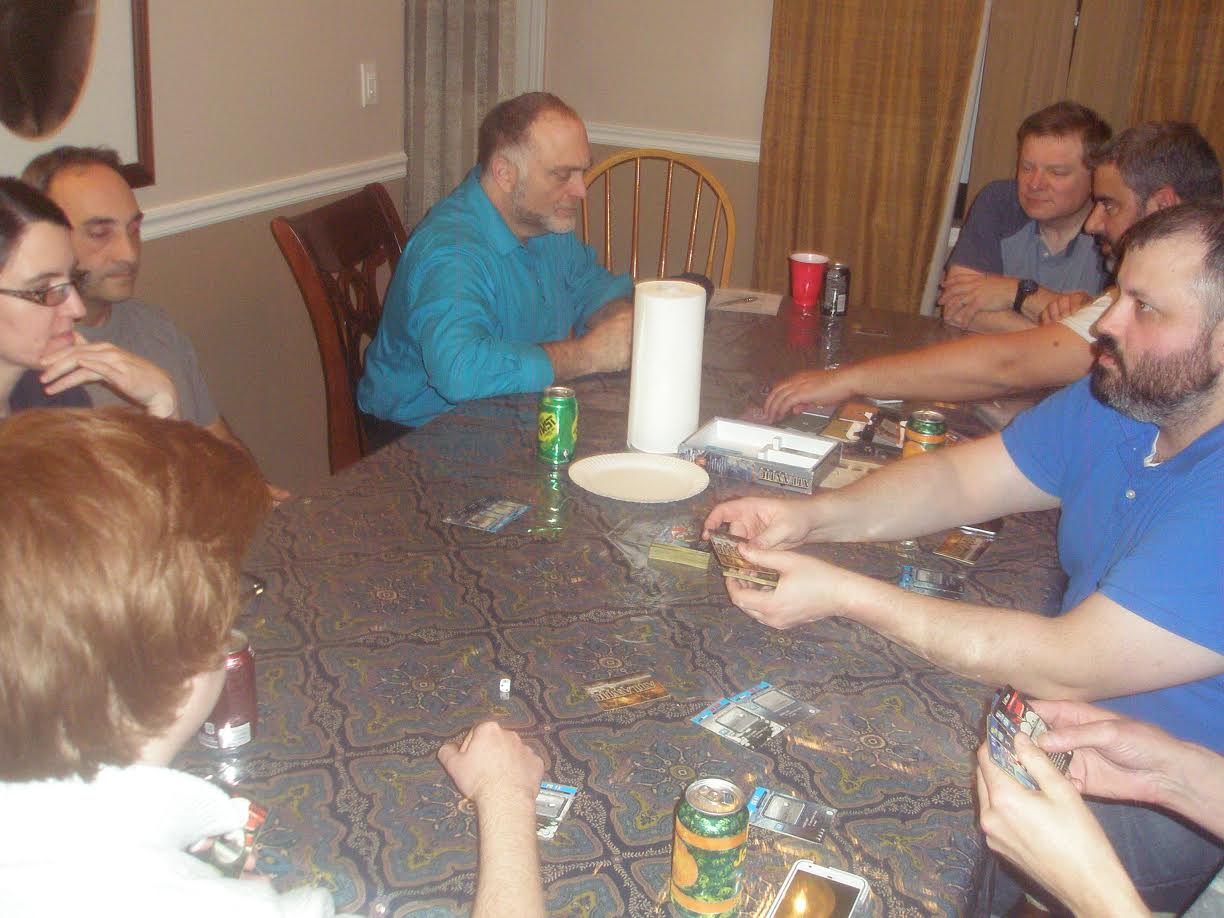 Avalon Hill was largely known as a wargame publisher, but by the 1980s, they had begun expanding out to strategy games (and sports simulation games). By the 1990s, the burgeoning strategy games market led to games like this one, which is still played some 20-plus years later.

Atlantic Storm is a trick-taking game, with a few wrinkles. Each round one of two convoys, worth a number of victory points, is chosen by the start player. That start player also plays a ship card from his hand, and selects a “suit” (either air strike, surface-based or submarine) and a side (Axis or Allied). Each ship card has different values for each suit.

Each player, in turn, can play a card from his hand. At the end of each round, the totals for each side (Axis and Allied) are compared, and whichever side has more strength, wins. The player who played the highest strength card then divides the spoils (the convoy plus any opposing side ships) amongst the winning side.

While there are many other small rules that add flavor and variety to the game, this is the crux of the gameplay. What makes the game even more interesting to wargamers, though, is that every ship (and convoy) is based on actual ships from the war (with true-to-life abilities). 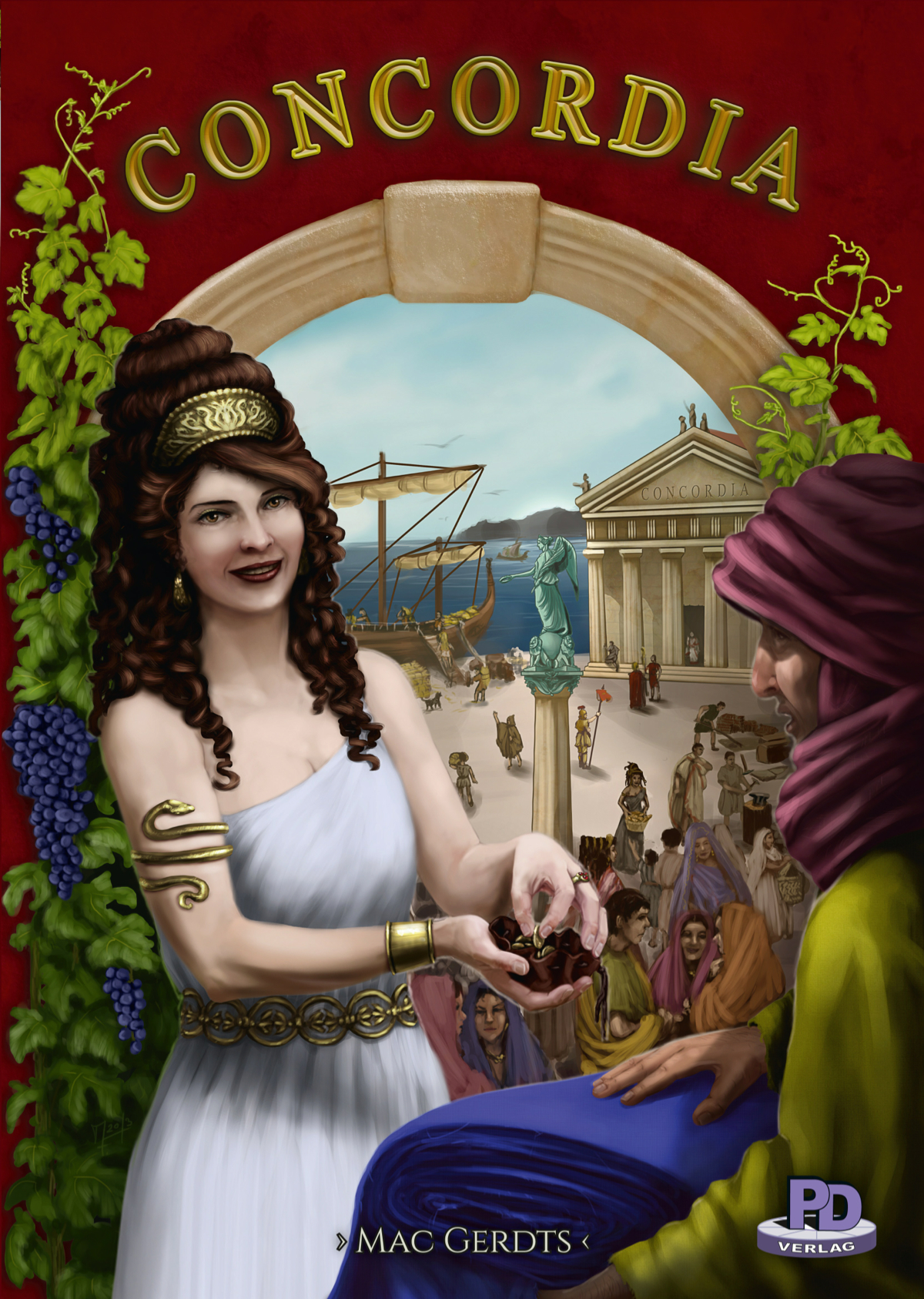 So, Concordia was a surprise to me, this year. I’d had the opportunity to play it once and declined, because each of my plays of the designer’s other games had been unsatisfying. (The designer – Mac Gerdts – designed Antike, Imperial, Hamburgum and Navegador). The one similarity between each of those games was the use of a rondel for selecting actions (which may be the subject of a future article).

However, Concordia doesn’t use a rondel. Additionally, unlike the afore-mentioned games, Concordia has expansion boards, making it more like Age of Steam or Power Grid (both covered in the 2016 5×5 article).

Much like the other games designed by Gerdts, Concordia’s “conflict interaction” is rarely bloody. All players start with the same cards, but throughout the game, they acquire other cards (which helps carve out a more customized strategy). Much like many other Euro games, the key is to develop an engine that returns more than the initial investment into the engine.

Having not actually played it yet, I needed to do some research on the game. The initial feedback mirrored what I suspected. It’s reminiscent of older Euro games (in other words, more straightforward, but still chock full of decisions; compared to a few other games in this year’s 5×5 challenge).

Players can play one card per round (which also helps the game move quickly). These cards let players get other cards, build cities, move armies and sell/buy items. Again, as an economic development game (with abstracted combat), the key is managing board position with investments to ensure the victory points generated are worth it. 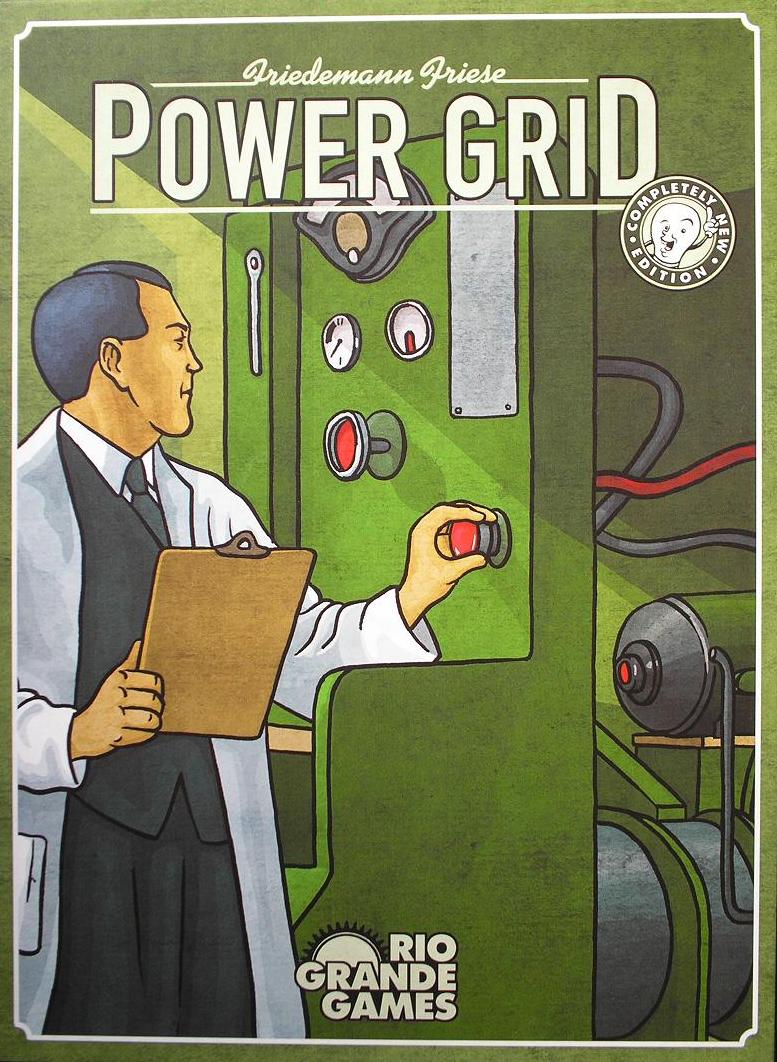 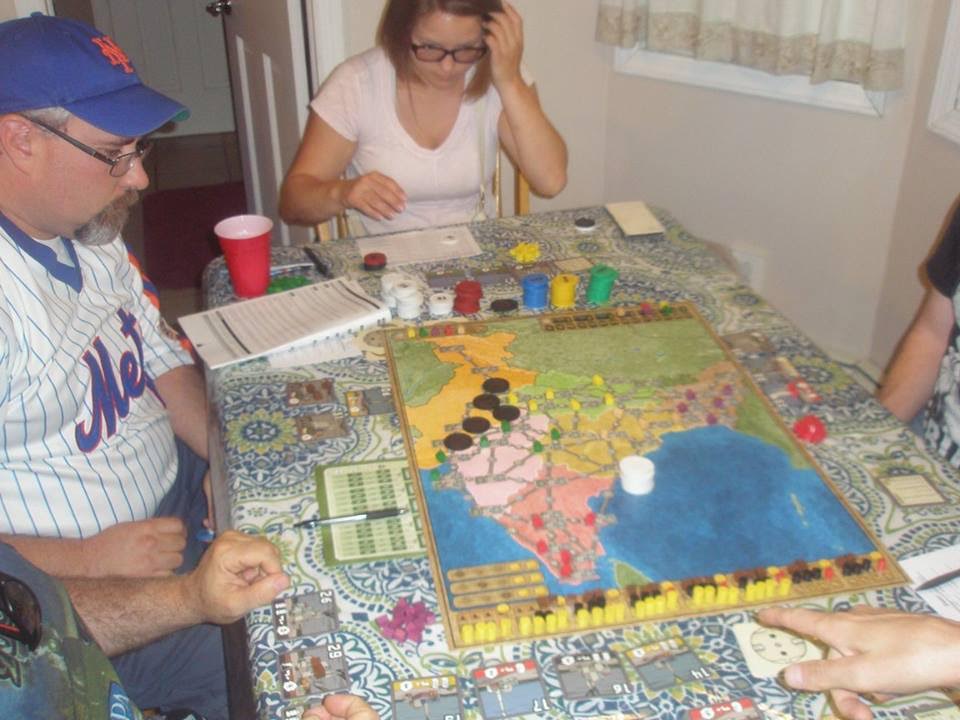 Power Grid was the lone holdover from the 2016 5×5 challenge (and was outlined in the last article). Again, the variety of maps/expansions plays a role in its selection, I’m sure. Technically, you could play the game five times in a year, with a different map each time, and have significantly different experiences.

Scythe hit the market in 2016 with a *lot* of hype. Having played it a few times so far, I can’t claim that it’s ground-breaking; but it’s a lot of fun, for certain. 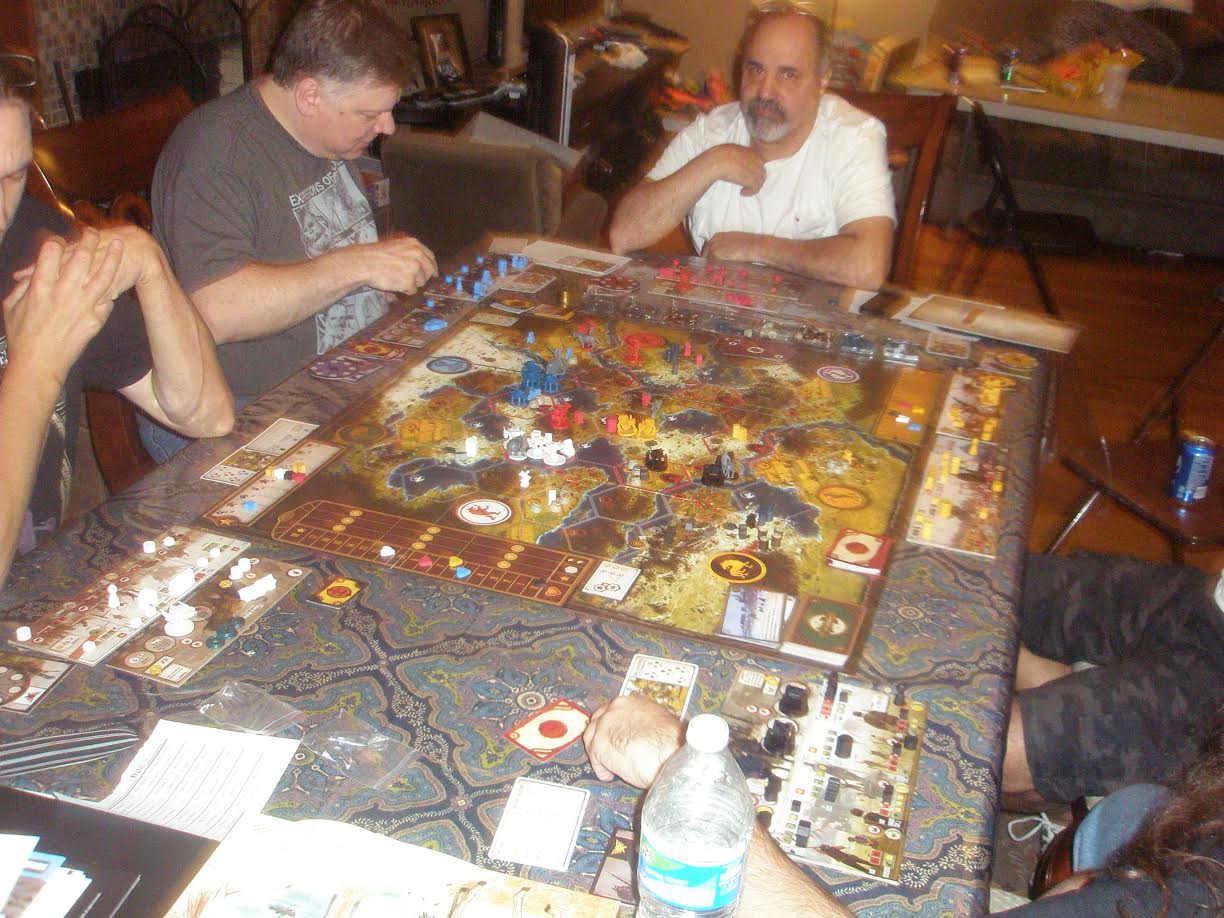 Each player starts with a civilization in an alt-history 1920s. Each civilization has slightly different powers and abilities (some seemingly far more powerful than others). 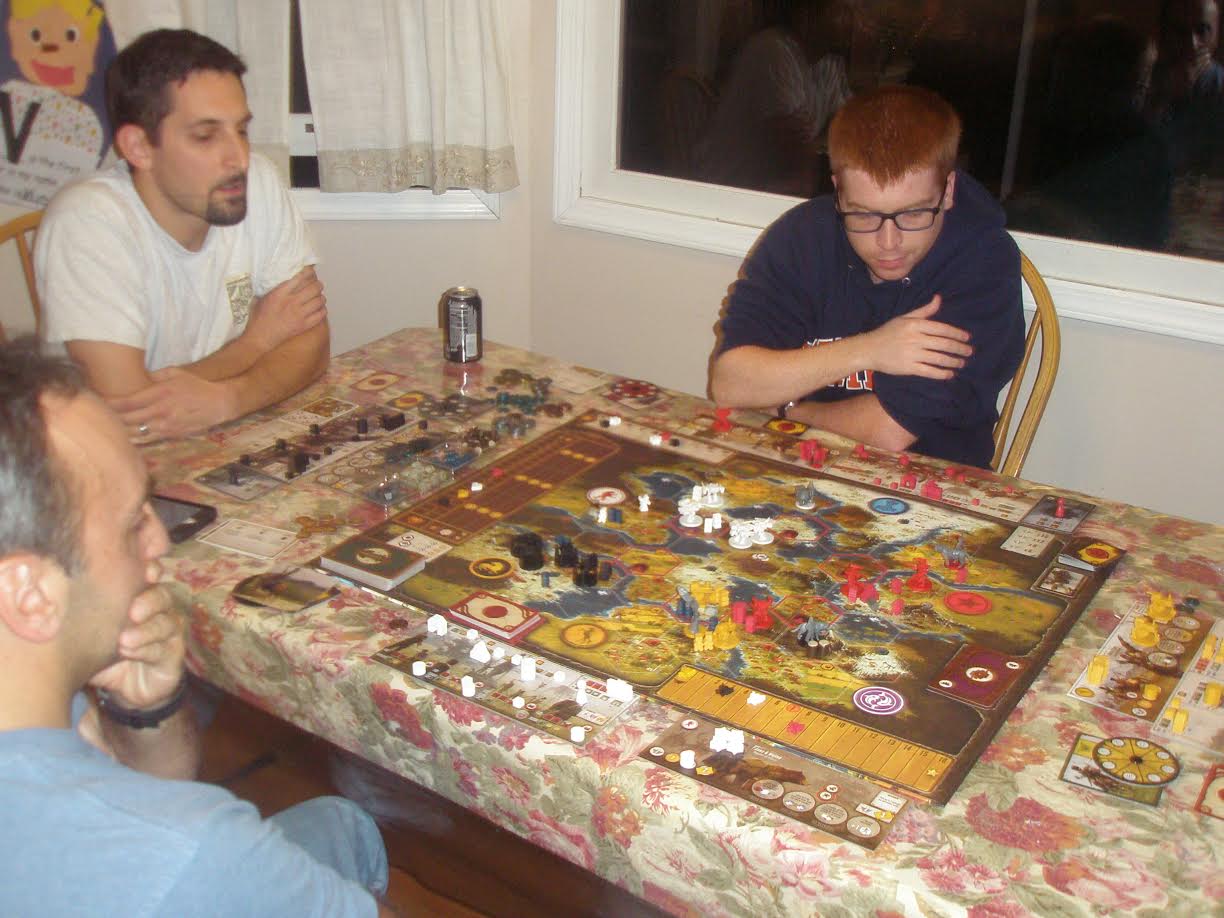 At that point, victory points are added, which include the number of achievements, pooled resources and territories claimed, all multiplied by a popularity modifier. While it’s likely that the person who ended the game *will* win; it’s by no means guaranteed.

At face value, the game sounds similar to many others. What differentiates it are the individual abilities of each race (which make specific achievements more attractive than others), and the combat. Unlike many other territory-control games, combat in Scythe isn’t nearly as punitive towards the losing civilization, making combat a more palatable endeavor. Obviously, the victor receives an achievement and a territory; but the loser only “respawns” in his home territory. 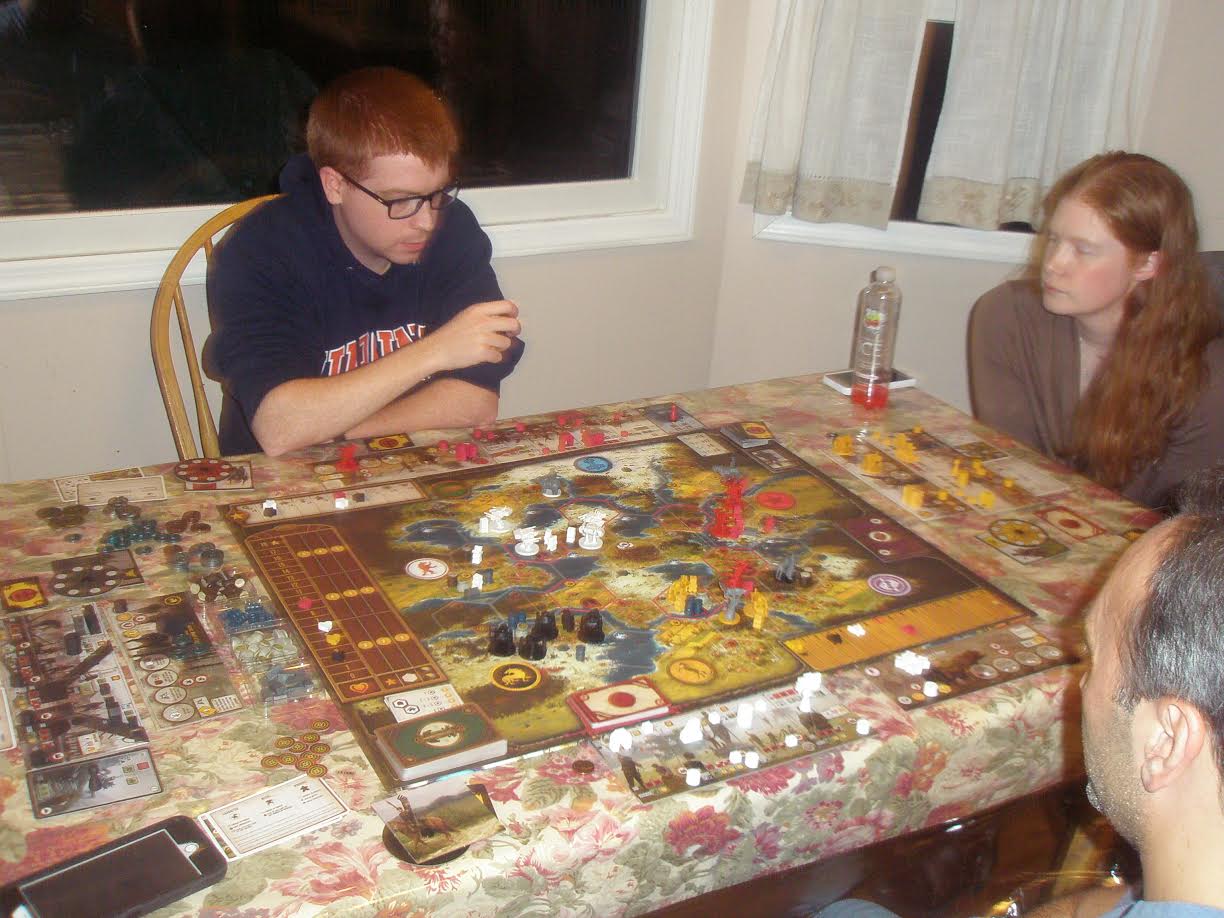 Another large difference (which actually has nothing to do with gameplay) is the quality of the game. The artwork and the miniatures (especially in the “pimped out” version) are breathtaking. I’m typically someone who isn’t swayed by aesthetics; but Scythe’s look is truly impressive.

Scythe may have been the most hyped game for most of 2016, but Terraforming Mars certainly ended the year with that designation. Immersive and sprawling, the game offers fairly straightforward gameplay, but the number of options in the game ensures completely different experiences. 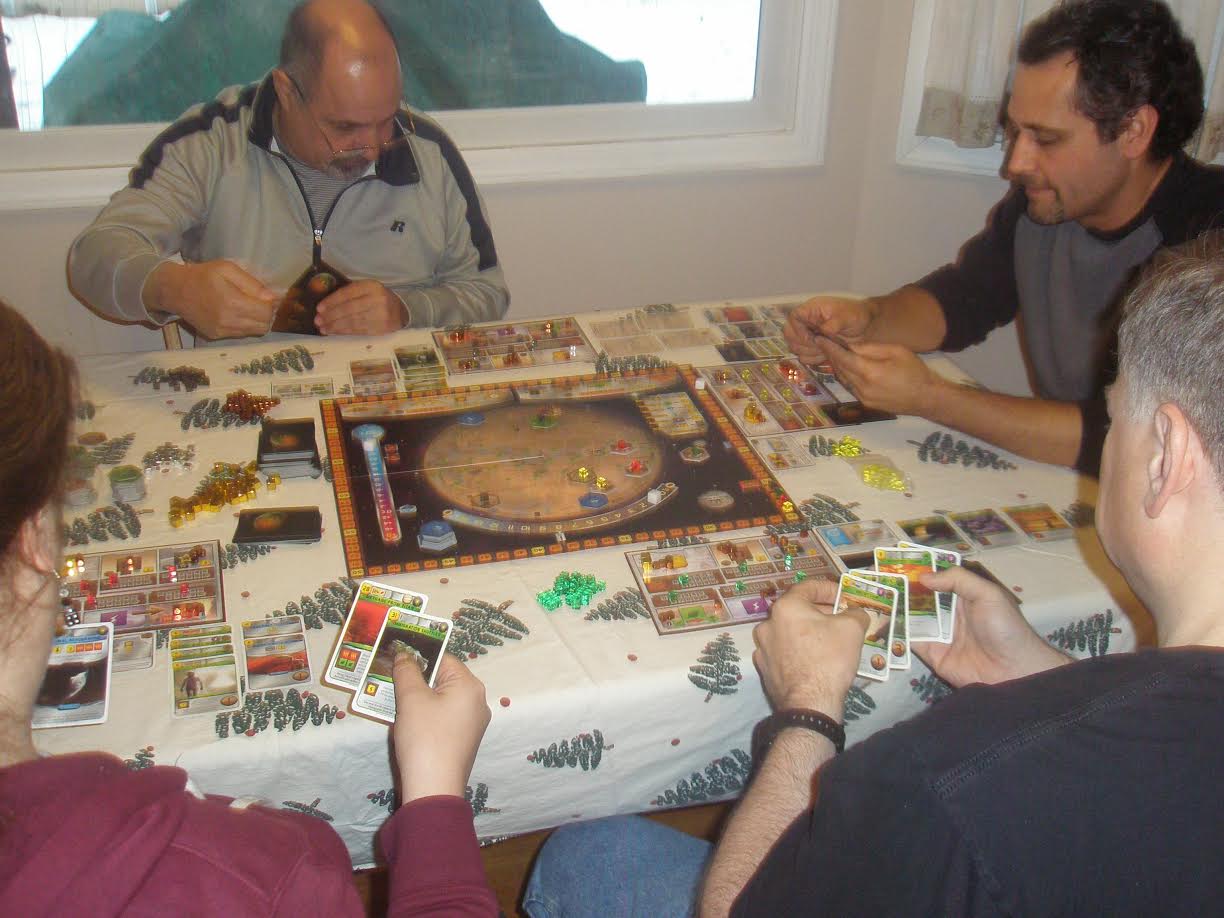 An extremely brief synopsis: Each player receives a corporation, which offers variable setup and a special ability. Additionally, each player starts with 10 “projects” in his hand. Projects either have one-time effects, permanent effects or actions (which can be used once per turn). Ultimately, the projects (cards) make up the meat of the game.

Each project costs money to play (and money to buy, after the initial 10). Those projects augment the resource production for each civilization. Resources are used to lay tiles on Mars (terraforming), which not only accumulate victory points, but also act as a timing mechanism for the end game. 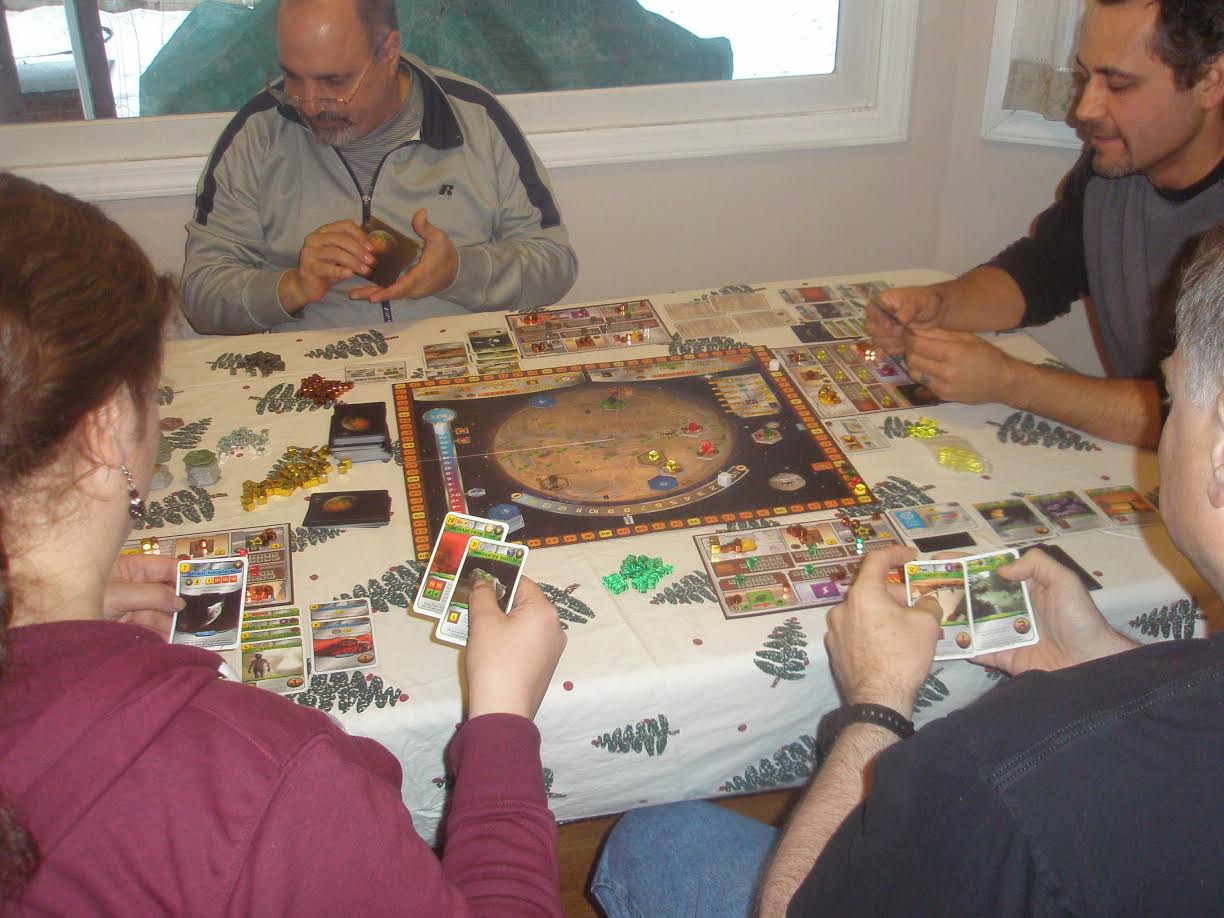 To say there’s a lot to think about would be an understatement. There’s a balance between long-term planning; ensuring you’ve left yourself enough money to do what you need to do *right now,* and making certain the game isn’t progressing too quickly (or, too slowly) for your plans. With more than 200 projects (and more expansions already in the pipeline), the amount of replayability is pretty limitless. 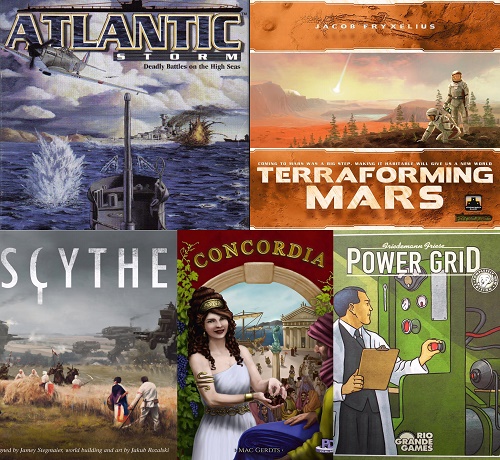 Of course, this list isn’t restrictive. It’s possible other games are also played more than five times in a year. But, this is a commitment that these five will be scheduled at least five times (and potentially more).

Does your group (or, do you) participate in any challenges? And, if you do, do you lean towards newer games or the older classics?