Fargo Season Two Characters: The Good, The Bad, and The Ugly (And Why We Love Them All)   By: Nicole Hampton   In a story, regardless of the medium...

(And Why We Love Them All) 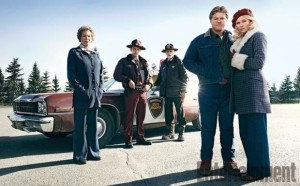 In a story, regardless of the medium being used to tell that story, there exists protagonists and antagonists. Certain traits which are considered particularly “good” or “bad”, “right” and “wrong” helps us better categorize these characters into heroes and villains. We are shown through words or film who to invest which emotions in. Hate and fear the villains, support and love the heroes. With Fargo, these emotions are fluid and ever changing as we get further into the story of a small midwestern town’s messy massacre.

With most crime-dramas we are rooting for the “good”. In great crime-dramas they can have us wishing the “bad” would escape even if they’ve committed terrible acts. In an excellent crime-drama such as this, we want every character to win, and have no idea if they’re going to because the lines between bad and good are constantly crossing till we have nothing but aesthetic zig zags.

First let us acknowledge who fits into our typical character niches. The Gerhardt family is surely the “bad” guys of this tale. Mike Milligan and the Kitchen Brothers (don’t mistake them for a prog rock band) could be considered even worse than the Gerhardts though. They are the lone killers, the “ugly” that set out on commands to see the gangster family of North Dakota  who we soon grow to love, destroyed. And then there is the “good”. The butcher and beautician who are small town folks that, through a chance hit and run involving a flying saucer, find themselves in a bit of a “pickle” that’s too big to handle. Then there is the state trooper Lou, sheriff Hank Larsson, and their friends and family. 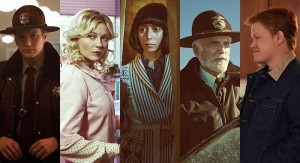 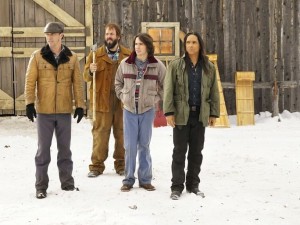 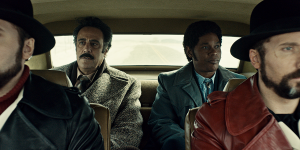 But the ideas of who to hate and who to love become almost irrelevant in the beauty of this disorderly story. When the criminals cry and the innocent townies start stabbing people and hiding bodies, we don’t admonish their flaws or surprising actions. We hold them in higher esteem for breaking out of the cookie cutter character and becoming as close as TV actors can to real humans.

So let’s start with the main character, Lou Solverson, a state cop who says “Ya,” whenever he finds a clue just the right amount for it to be charming. We learn that his wife Betsy is dying of cancer and that her dad, Hank Larrson, is in law enforcement as well. They all weigh in on the right side of the law, and even their friends, a drunk burly lawyer and an often confused mechanic are what we would consider innocent. All of these people have been born and raised in this small town together and have never seen such hostility in their quiet wholesome lives. So when the bad side starts interacting with these people, we wait for the cowardice that is often shown when bad meets good. But when push comes to shove…well I think Mike Milligan describes it best when he first meets Lou:

“It’s the way you’re unfriendly. You’re so polite about it.

This is why we like the good virtuous folks of Fargo just as much as Mike does. When faced with an adversity they never contemplated would come to their uneventful town, they’re unfriendly. But so damn polite about it. We can see they are truly steeped in the ways of the midwest till their last accented breathe. And if I were to point out the collective factor of good that resides in all of these protagonists, this is it.   People who could have been (and are all too often) portrayed as wimps with corny accents evolve into eloquent and bold individuals.

As seen with Betsy when she believes there’s an intruder in her home:

What a terrific line at the end from the woman with terminal cancer who holds a gun half her size with steady hands, ready to shoot anyone who invades her property. No Betsy, you certainly are not someone who looks like they need looking after.

And let’s not forget about when Lou scares the shit out of us by relating the Blumquist’s dilemma to his memories of war:

Although Ed and Peggy are as Lou puts it, “already dead”, the determination and bravery they show throughout their roller coaster ride of killing and kidnapping makes them all the more likable. Especially when Peggy stabs Dodd during his hilarious sexist rant in order to save her husband.

FX has succeeded in making the fearful, fearless. And for that I applaud them. But I stand up and shout encore for the ways they fill the fearless with fear. In the midst of a war enacted on Gerhardt family and much hostility occurring within the family itself, there is special time made for compassion, sadness, and love.

This is clearly seen when Dodd looks for not only comfort, but forgiveness from his mother after jump starting a war his mother never approved of by attacking Joe Bulo’s men in a time of peace.

As Joe Bulo says during their failed meeting, “That’s the problem with the family business. If one of my men defies me, puts a deal in jeopardy, I take his arm. If he talks out of turn, I take his tongue. But you, your children, your grandchildren. What are you willing to do to show us your committed?”

The answer from the grandmother with gumption: War. Because she is no Joe Bulo or Mike Milligan. She is a mother of six with a dying husband, standing on a empire made of those she loves above all else.

But there are those in the family willing to make tough decisions for the good of the Gerhardts, who are willing to be not only bad, but ugly. Like when Bear feels forced to kill his niece because she had put many of them in jeopardy by sleeping with Mike. We can tell that although he did kill one of his own, the act wasn’t a senseless one. And it caused him much pain as we can see when he comes back to his car.

Then there is the family gun man, Hanzee, the “Indian”. We don’t really know for certain how his life has been living and serving the Gerhardts from such a young age. Only that it has been hard and full of racist prejudice, even from those he serves loyalty. We don’t even know why he broke this loyalty in the end, or even when he had the idea to do so.

But even with his rough exterior, this constant man on a mission has a sincere moment with the beautician, right after it is clear that he is out to betray the Gerhardts. 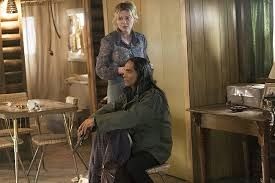 He perhaps is the most ruthless of killers in the series, yet we are constantly feeling sympathy for his tribulations. He has no real family besides the Gerhardts who treat him like a pet that always obeys. People are constantly judging and discriminating him. And when he is vulnerable for the first time in the show and asks for a haircut because he’s “tired of this life”, clearly in the hopes of making a change for the better, he gets stabbed by the person he has shared a moment of weakness with. And for that he cannot allow them to live.

We can see there are those in the small time mob family who are willing to cross the boundary from bad to ugly when it seems necessary. But still, they don’t come close to our out of town gangsters who bring the goods while acting oh so brilliantly ugly.

The only person that rivals Hanzee in his merciless attitude is Mike Milligan. And he not only rivals Hanzee in being the ultimate “ugly”, but could also battle with Morgan Freemen in the most sexiest smoothest voice known to man.

Mike Milligan’s haunting voice and off-putting calm demeanor makes him a wonderful villain. The writers used this amazing actor to the fullest by making him smart as well as deadly, which is doubly frightening. Plus, he’s a little nuts. As we can tell from his quoting of various influential pieces of literature or explaining situations via analogies that none of the townsfolk appreciate. His brilliance doesn’t impress them, but merely confuses them in it’s absurd timing.

I, on the other hand, am beyond impressed. That soon turned into an obsession after his Jabberwocky poem monologue from Through the Looking Glass by Lewis Carroll.

This only adds to what the show is all about: a whole lot of nonsense.

But it’s nonsense with purpose. Maybe that’s why we love this show so much. Because that’s how real life feels. Like a whole lot of purposelessness fit into some grand scheme.

In the end, we love all of the characters equally. Unlike most that have uniform labels, there is no clear cut definition to help you along with deciphering who to like and who not to, who to root for and who to boo. We like them all. We love them all. We root for the criminals and the cops. Why? Because they’re the most real life complex creative characters on television that we’ve seen in a long time. We love them all because there’s a bit of good, bad, and ugly in each and every one of them.

Ash vs Evil Dead: Season One Review by Paul Aloisio