Fallout: New Vegas – The Best in the Series? I’ve never been much a fan of Westerns. Gunslingers, trail songs, desert settings…they never really seemed to hit it off...

I’ve never been much a fan of Westerns. Gunslingers, trail songs, desert settings…they never really seemed to hit it off with me. While I could see the appeal to others, it never quite struck me as something I would ever go out of my way to immerse myself in – that is, until I played Fallout: New Vegas.

New Vegas, unsurprisingly, is a post-apocalyptic RPG published by Bethesda softworks. Though Bethesda published it, the game was created by Obsidian’s developing team, which gives the game a slightly different feel compared to the Bethesda-developed Fallout 3. It holds true to most of the core elements of the third Fallout, and while it doesn’t really break any new ground, it instead expands upon a nearly flawless gameplay system and simply manages to make it even more enjoyable. Yes, you read that right. Not only do I consider New Vegas to be a better game than Fallout 3, I also consider it to be superior to Fallout 1, 2, and 4 as well. Putting 2001’s Fallout Tactics aside, due to it not being an RPG, New Vegas is hands down the best game in the franchise.

The reason for this is simple – and factors much of personal preference into the decision as well. The fact is this: the success of a role-playing game is how well the player can personally immerse his or herself in the fictional world in which the game takes place. If there’s a poorly written story or wildly unbelievable environment, the game will fail. Gameplay mechanics must be solid, but to be honest, while playing an RPG, I’ve always felt that character interactions and questlines are vastly more integral to the game than combat. Of course, it’d be foolish to say that combat can be completely taken out of the equation, but it’s still not the most important part. The enemies, rest assured, are both tough and terrifying, giving much credit to the hordes of Deathclaws and disgusting, buzzing Cazadores. The characters you encounter must have personality; they’ve got to have little quirks and independent flavors, separating one from the other. The world must be open to near-complete exploration as well as giving the player enough options to make their own story with their own decisions, instead of strictly following what the game wants them to do. New Vegas succeeds in all of these things and more. 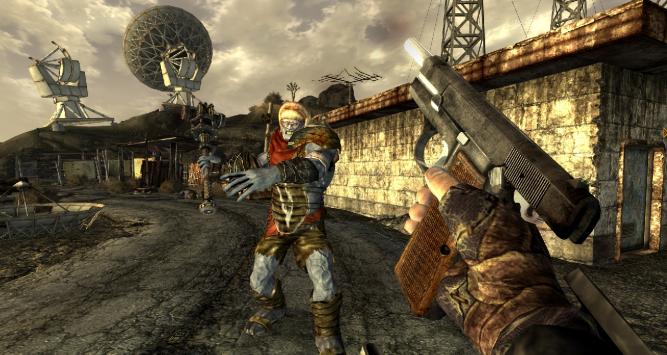 The story is phenomenal, and while it doesn’t carry the “weight of the world” aspect like many (most) RPGs do, it’s still completely immersive and addictive. You play as “the courier”, a character left for dead by a mysterious man, leading a violent faction called The Great Khans. You, The Courier, were on your way from the town of Primm to New Vegas, with a mission to deliver something called “the platinum chip.” The Khans found you, took the chip, and buried you. Soon after, a robot named Victor digs you out and takes you to the town of Goodsprings, a tiny little settlement in a post-apocalyptic Nevada. It is here that a doctor named Mitchell fixes you up, helps you through your character creation, and sends you on your way to find the man who tried to kill you and seek vengeance.

However, this is just the beginning. The plot starts to seriously thicken, from a classic whodunit to an all-out faction war, in which you have complete control as to who will be the victor. No, the game does not concern itself with saving humanity, but it instead asks you to decide the fate of only one small faction of this war-torn America.

Which is really where this game succeeds; the factions in this game have rendered The Brotherhood of Steel, in this part of the world, almost nonexistent. Their only concern is technology, and being that the Mojave is a bit lacking, they don’t have much of a concern with this part of the country. This fact alone makes the fictionalized America from the Fallout series seem way bigger than it ever was – the game decided to change the BoS from overseeing baddies everywhere throughout the USA to just another faction. It’d be all-too-easy to create a game in which The Brotherhood is constantly watching over you, and the decision to make them into only a minor faction makes you realize that the world in which the game takes place is much bigger and open to more possibilities than anyone had ever realized before.

Instead, the factions here are very different than anything we’ve seen in Fallout 3, from the strangely Julius Caeser-inspired Caeser’s Legion to the Democracy-preserving New California Republic (NCR) to Mr. New Vegas’ robot horde. As for the minor factions, here exists the Boomers, Great Khans, and a school of Elvis impersonators called The Kings, a personal favorite of mine, due to my absolute love of anything related to The King of Rock and Roll, may he rest in peace. The karma system is still in place in this game, and beyond that, you also have a reputation system; instead of concerning yourself with only the whole of the wasteland, you have to keep in mind how each individual faction perceives you. One faction could kill you on sight while another could welcome you as their leader. It’s a really awesome addition to the game, and makes the story run very deep. 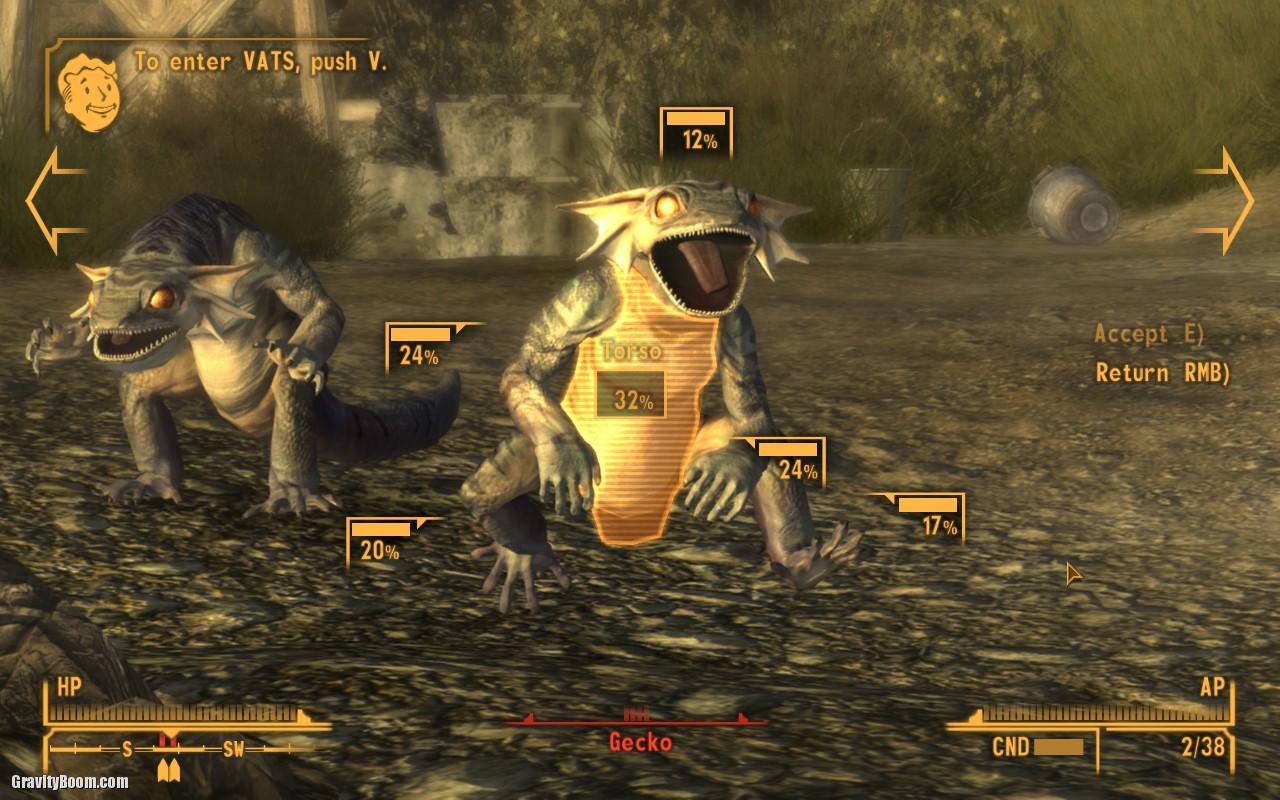 The V.A.T.S. combat system has remained pretty much the same and works very well when you get stuck in a tight situation, which makes much of the actual gameplay very similar to Fallout 3. Being that the combat and actually gameplay is so similar, the two games are almost identical in feel but drastically different in atmosphere. The hot desert sun, coupled with one of the best video game soundtracks I’ve ever heard, took me from shrugging off John Wayne films to completely devouring Lous L’Amour novels. Yes, it’s futuristic, but there are many times in the game when it feels as if this is how the west is simply supposed to be. There is also a perk that can be chosen from the beginning called “Wacky Wasteland”, which I recommend everyone to choose, as it makes the game just plain weird at times. With that weirdness comes a lot of hilarity, and the humor really amplifies the game; something that I felt was desperately missing from Fallout 4 when it was released in 2015.

As for open world exploration? Well, it’s is a Bethesda game, isn’t it? If there’s one thing you can always count on them for, it’s their attention to detail in all of the tiny, seemingly minute details. In this game’s wasteland, there is so much to explore that one can easily forget that there’s an actual storyline going on throughout. Most notably, there is a quest in which you must fend off Nightkin, which are Super Mutants who have become addicted to stealth boys, making them invisible (and blue, for some reason), for a group of ghouls who plan on flying off in a rocket ship into outer space. Yes, the game gets wacky and weird, but that’s one of the reasons why it exceeds any and all expectations.

When all is said and done, when put head to head, New Vegas will always trump Fallout 3, simply because the atmosphere, music, and storyline clicked with me in a way that was much stronger than the previous installment. This is not to say anything wrong about Fallout 3, as both games are in my top ten of all time. I’m simply saying that when it comes down to it, the only real way to compare the two games is by going with which setting appeals to you more. Whenever I’m in the mood to hit the dusty trail and blast some Mart Robbins while fighting off raiders, there’s only one game in the world that can satisfy my craving: New Vegas. Play both and find out which war-torn America you like better. 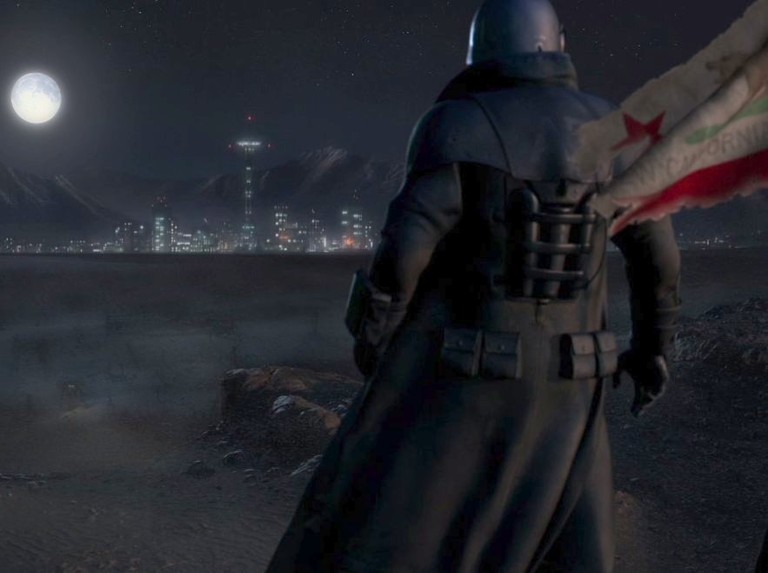