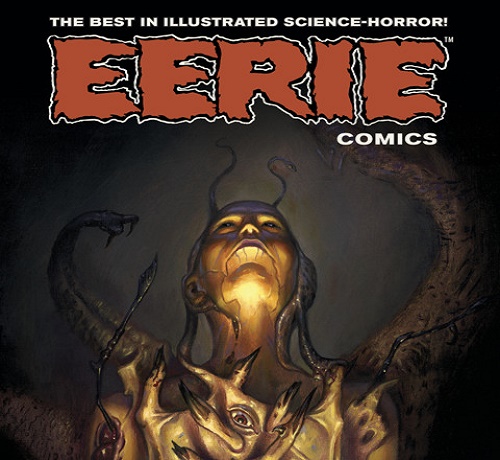 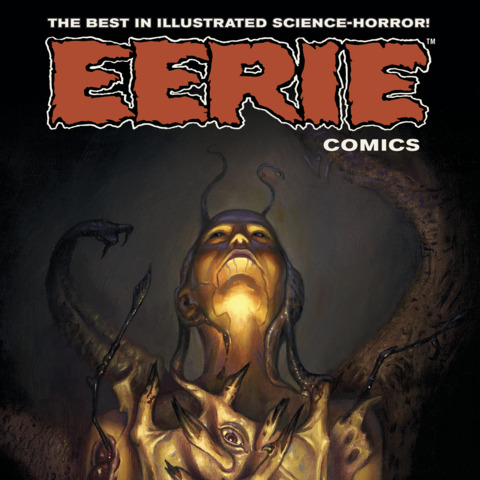 EERIE Volume 1: Experiments in Terror is a collection of EERIE Comics issues 1 – 8, collecting more science fiction horror stories than you can keep track of. EERIE is an anthology series, much like EC’s classic Tales from the Crypt, except they focus more on the science fiction aspect of horror than your standard ghouls and goblins fare. In this black and white collection by numerous writers and artists, you can find giant babies, talking ants, and killer gingerbread men – but with so many stories in one volume, it may come as no surprise that not all are created equal.

The stories collected here are often quick and to the point, which either works in their favor or kills the story before it can fully begin. Due to the science fiction nature of these tales, many of them are incredibly wordy and don’t really have the time to develop and create anything truly memorable. The stories are often predictable and contain numerous plot devices and twists that are hardly new, but that doesn’t entirely take away from the entertainment factor.

If there is one thing that can be said about this first volume, it is that Experiments in Terror will undoubtedly keep you occupied for some time; and with so much variety there’s bound to be at least a couple stories that will stick with you. Standouts for this volume include Hunger, written by Landry Q. Walker and illustrated by Troy Nixey which features some gritty, highly original artwork and a compelling yet bizarre story about an alien who just wants to eat some damn meat. The two Christmas stories included here as well are also highlights; The Ash Tree, originally written by M.R. James and illustrated/adapted here by Kelley Jones is a gothic tale set on Christmas morning featuring high levels of atmosphere and a great plot. The second Christmas tale, Run…Run…As Fast As You Can, written once again by Landry Q. Walker and illustrated by Dev Madan, is just a simple story about some killer gingerbread men. It’s darkly funny and has just the right amount of zaniness that made last year’s Krampus so enjoyable. 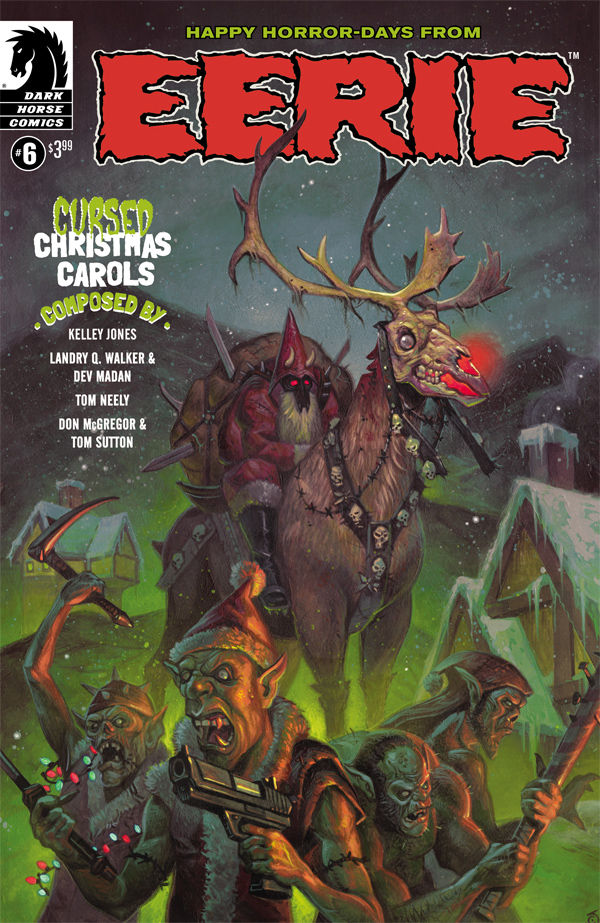 The anthology would benefit greatly in having fewer stories and giving each of them greater lengths, which usually ends up being my complaint with anthology series. Though some are just perfect being quick and to the point, many of them feel like the idea was only just getting started when the writers realized that they were running out of panels. Eerie has been dormant for decades before this volume, and unfortunately, these stories collected here do not capture the creepiness or vintage kitschiness that fans of the original series love so much.

Another interesting point in this anthology is that the reprint stories are omitted from this volume. Each singular issue thus far has included reprints of classic EERIE but here, only the newer ones are kept in. While there is probably a good reason for this, this means that if you are looking to read all of the first eight issues in full, this collection will only get you so far.

If Dark Horse’s EERIE is to continue, it may be a good move on their part to reach back and try to recapture what the original run did so well – which is creating effective and original stories. The creep factor needs to be upped if this series is going to survive in its current state. Come on, EERIE, you can do it; I still believe in you!

Reason’s to be Excited for DC’s Rebirth