Dreamcatcher, a 2003 film adaptation of a Stephen King novel, is a horrible movie. It is terribly, terribly bad. So bad that it’s funny – you know, just like that...

©2003 WARNER BROS. - U.S., CANADA, BAHAMAS & BERMUDA. ©2003 VILLAGE ROADSHOW FILMS (BVI) LTD - ALL OTHER TERRITORIES (ALL RIGHTS RESERVED USED BY PERMISSION). PHOTOGRAPHS TO BE USED SOLELY FOR ADVERTISING, PROMOTION, PUBLICITY OR REVIEWS OF THIS SPECIFIC MOTION PICTURE AND TO REMAIN THE PROPERTY OF THE STUDIO. NOT FOR SALE OR REDISTRIBUTION
by Paul Aloisio January 6, 2017

Dreamcatcher, a 2003 film adaptation of a Stephen King novel, is a horrible movie. It is terribly, terribly bad. So bad that it’s funny – you know, just like that little movie called The Room?

For whatever reason, though, it often goes unnoticed and excluded from the Bad Movie Hall of Fame. This is unacceptable. It’s just not fair. Dreamcatcher is certainly bad enough to be considered one of the worst movies ever made, and I want to make sure this film gets its deserved recognition.

One of the great things about this horrible movie is just how much talent went into it. It actually defies science that it could be so bad while still toting the names of Stephen King, Morgan Freeman, and Lawrence Kasdan, just to list a few. It’s extremely important to note that this Lawrence Kasdan is in fact the same Lawrence Kasdan that wrote Star Wars Episodes 5 and 6. So what the hell happened? How did such an all-star team of accomplished Hollywood names churn out such utter nonsense?

To be completely honest, I do not know. I have absolutely no idea how something like this was ever possible. Dreamcatcher just manages to get everything wrong.

It’s just stupid beyond all belief. And for that, I love it.

But I don’t think it’s very fair of me to just keep spouting off about how bad it is without describing anything. And I’d certainly love for everyone to see this movie – you really need to see it to understand how hilariously awful it is – so I hope I’m not dissuading you from watching this. No, if anything, I’m trying to encourage it. This is a movie that isn’t for everyone. It’s not for anyone besides those who delight in watching nonsense. If you are a bad movie connoisseur such as myself, I want you to watch this. I need you to watch this. It’s important, okay?

I am a Stephen King apologist, through and through, but even I cannot understand how this story ended up the way in which it did. To blame King alone would be a little unfair, as all he did was write the novel and not the screenplay. Still, something feels fundamentally wrong with the story as a whole. This is understandable; for a writer who has such a huge output as King, not everything can be a masterpiece, I suppose.

The story follows a group of friends (which includes a stellar cast of Thomas Jane, Jason Lee, Damian Lewis, and Timothy Olyphant) who meet in a cabin in the woods of Maine each winter. Friends since early childhood, they are now missing an integral part of their group – Duddits. Oh, Duddits. This is the name for a boy they had known when they were growing up together who was mentally retarded, but, somehow, has psychic powers and in turn gave the rest of them psychic powers. Played as an adult by Donnie Wahlberg, Duddits has given the friends the ability to read each other’s thoughts and more. This is never really explained, and never really makes much sense.

They soon come across a man in the woods who is impregnated with a psychic alien creature that needs to be shit out…or something. The only way these aliens can conquer earth is by causing a massive shit attack amongst the human population. Think about that for a second. That’s the story of this movie. I’m not lying to you. If that wasn’t bad enough, they choose to call these organisms “shitweasels”. 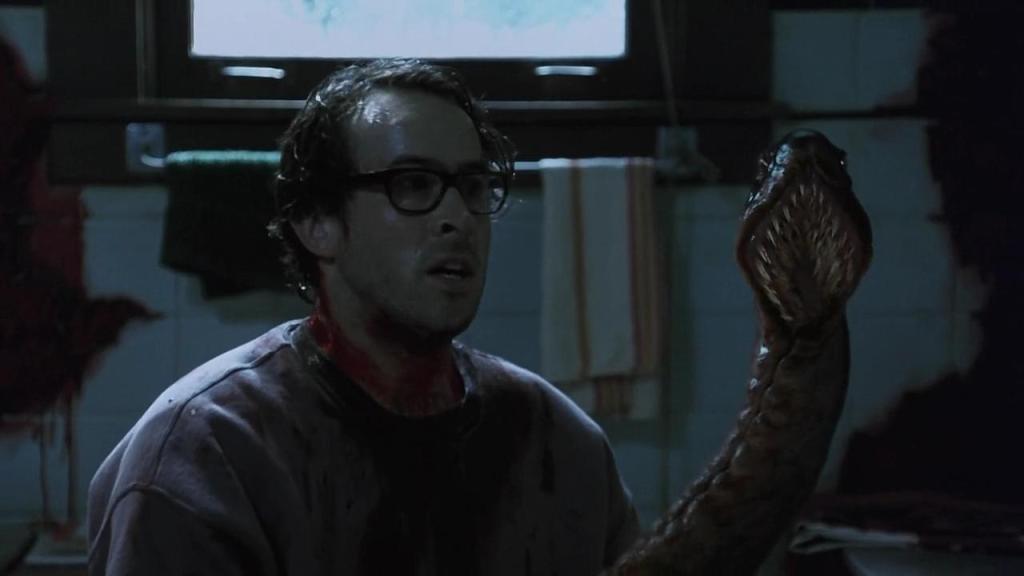 So while these guys are dealing with the Shitweasels, Morgan Freeman’s super pissed off and stuff, and Duddits comes back to fight the aliens but has cancer or something which just seems super mean, and then an alien possesses one of the friends and names himself Mr. Gray and gives the body he has stolen an English accent. Oh yeah, and when the alien crawls up this guy’s ass, it’s because he’s pissing his friend’s name while drunk in the snow. He’s just writing “Duddits” with his penis.

The dialog is awful. It’s laughably bad. Even Morgan Freeman crumbles in his role. And as I said above, Duddits hand in life that he’s been dealt just feels rude. The guy’s got enough on his plate, and then you have to give him a horrible disease? Come on. There’s redemption in the end – King’s charm is hard at work here – but it feels like a hurried and lackluster conclusion.

The effects are fine for the period in which the film was made, but they’re not enough to save the film. The plot is heavy and confusing. It doesn’t make any sense and drags the film on for two over hours. Which, most definitely, gives points to the “Bad Movie Factor”. It’s so long. It’s so fucking long. Why did this movie have to be so long? What is the point of this damn movie?

Other parts of the film that just don’t help are the weird libraries that these guys have in their heads. They literally go into a visualized library of thoughts and run around carting books around. I’m sure it worked well in the novel. On the screen? Should’ve had someone proofread the screenplay.

Oh, and Morgan Freeman’s eyebrows. Look at those things! After Dreamcatcher, Kasdan did not do much work in Hollywood for a good number of years. He would not write a screenplay again until 2013’s Darling Companion, which I don’t think anyone has ever seen. In a happy turn of events, however, his next work after that would be 2015’s The Force Awakens – a true return to form. Even more so if you’re one of those people who think it’s A New Hope 2.0!

There’s something amazing about this film – and that’s the fact that it ever got made in the first place. How so many talented actors could come on board; how such an accomplished writer could create something like this; how much money would be spent on the movie; all of these things will forever amaze me. It’s one thing for Tommy Wiseau to finance his own worst movie of all time, but for this much talent to bomb this bad?

For those who are brave enough, at the time of this writing, Dreamcatcher is available on Netflix streaming in the US.