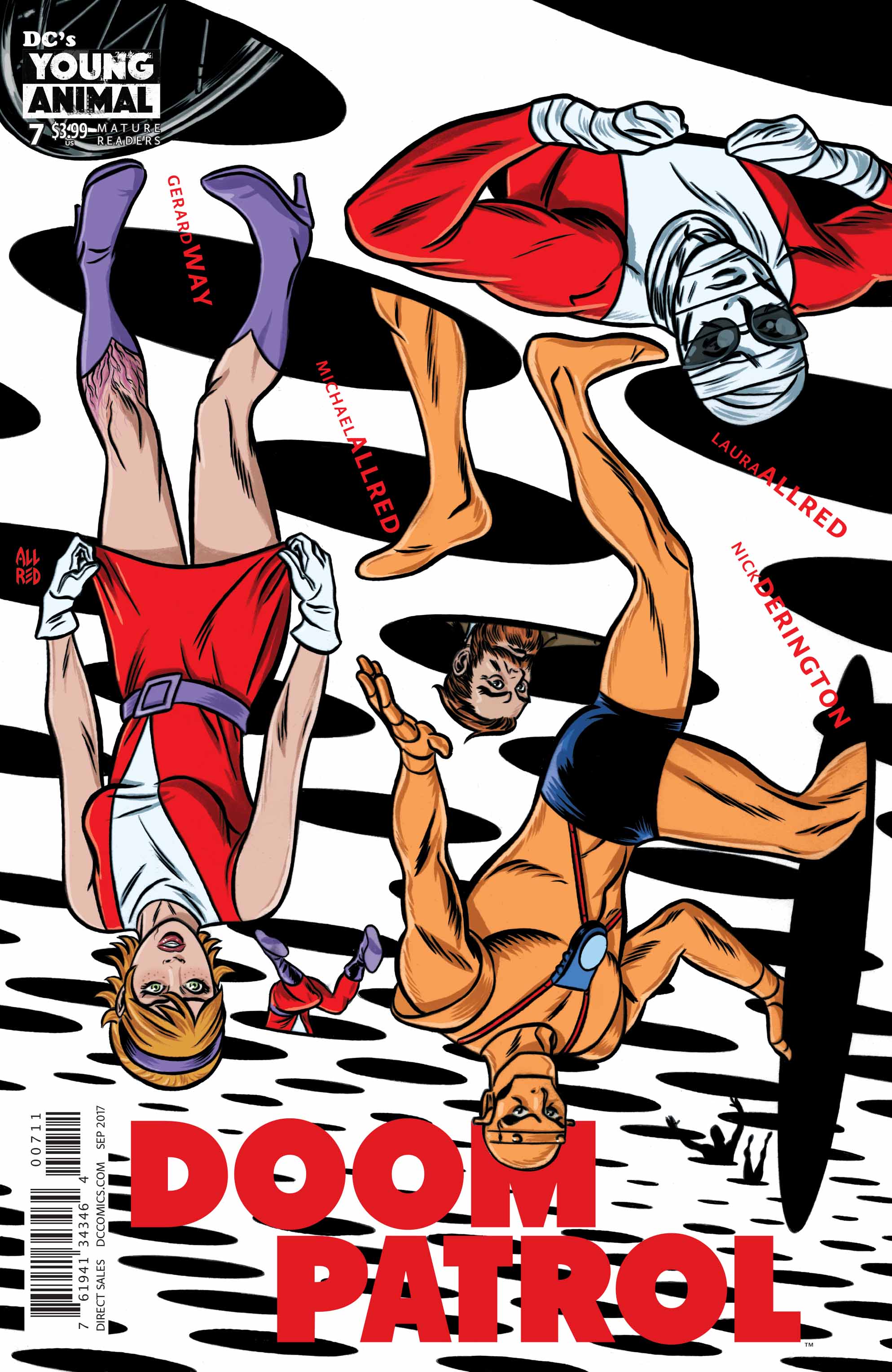 The legendary Mike Allred comes to the world of Doom Patrol for a new arc that promises to be even more far out than the last. After a couple of trials and tribulations (and a healthy dose of family drama), Casey Brinke is now a member of the weirdest superhero team in comics. Larry and Cliff are chilling out at the mall. Niles Caulder is looking for a new gig. Poor Lotion is missing. In other words, the story starts as another normal day for the Doom Patrol that quickly spirals out of control (which in itself is a pretty normal occurrence for the team). 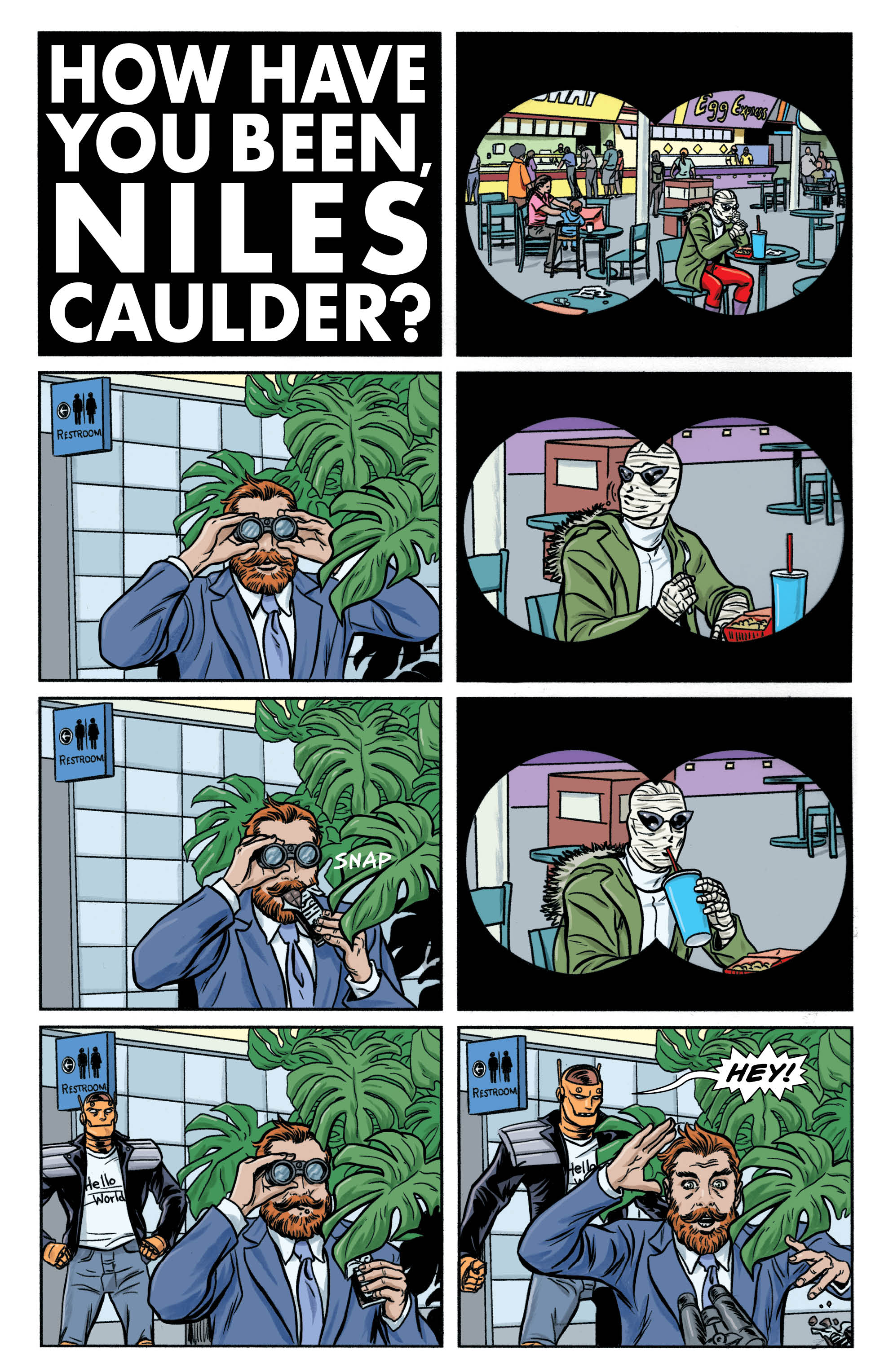 I’m really impressed with how little time Gerard Way has spent backtracking, setting up the team, and explaining more than 50 years of continuity. He lets his characters, who are far more interesting than simple exposition, speak for themselves. 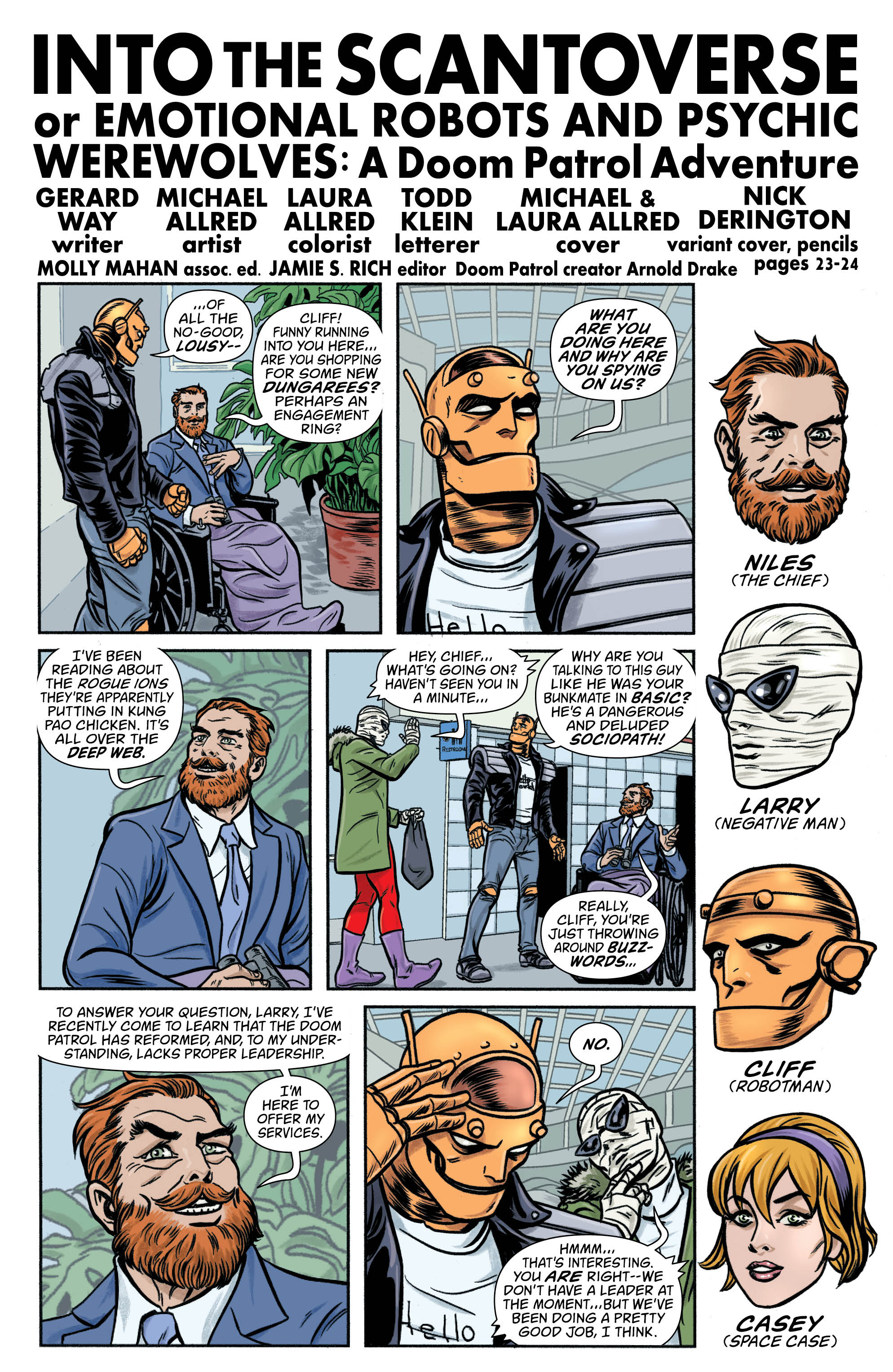 Niles is a particular high point in this issue. He’s as charismatic and manipulative as ever. The mad genius is missing some screws for sure, but can still talk his way out of every situation. It’s safe to say that some of the members of the team still feel some animosity towards their former Chief after years of crooked schemes and lies. Certainly, we all know Cliff isn’t a fan.

It’s hard not to compare Way’s run with Grant Morrison’s excellent take in the early 90s, especially when the story is as psychedelic and mind-bending as “Into the Scantoverse,” which sees the Doom Patrol travel to the universe of bad ideas. Way adds his own sensibilities, of course, and is still playing around with the structure of the book, which I love. It’s not an easy task to break up your book with interludes and digressions that are as interesting as the main story, but Way manages this with ease. There’s a particularly sad scene around a dinner table midway through the book, as well as a snap commercial break that works to great comedic effect. Ultimately, Way is cut from the same hippie punk, mind-expanding fabric as Morrison, and the book is all the better for it. Way takes homage and nostalgia and runs with it to unexpected places, though. 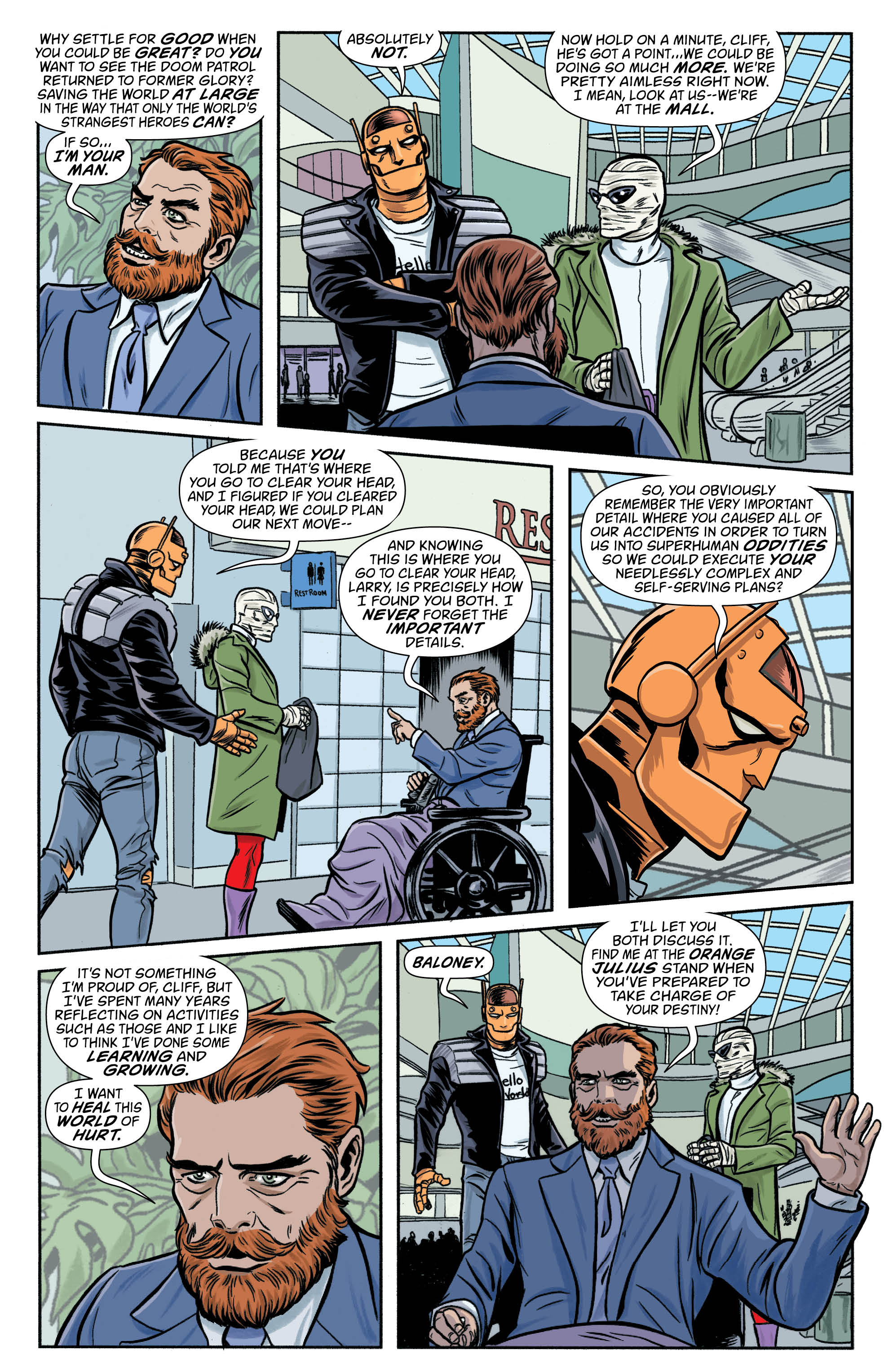 Such as the Scantoverse, which is brought to life by Mike & Laura Allred with lots of color and touches of pop art. (Thanks to the Allreds, Way actually makes a cameo in the book, which you’ll probably miss at first, but look for it in the universe of bad ideas, a subtle bit of self-deprecation that’s good for a laugh.) Allred feels right at home drawing the Doom Patrol and their crazy adventures. There’s a retro touch to his drawings that sort of takes this book back in time to the much earlier days of the Doom Patrol, which complements Way’s writing perfectly. Even the action bits feel like they’re from another time.

Saying anything more about the story would be a disservice to you. It’s a really great start to a new arc, with a Doom Patrol team that might feel familiar but has all new threats to face and worlds to explore. Plus, trouble waiting at the Orange Julius stand and green bean chicken casserole! 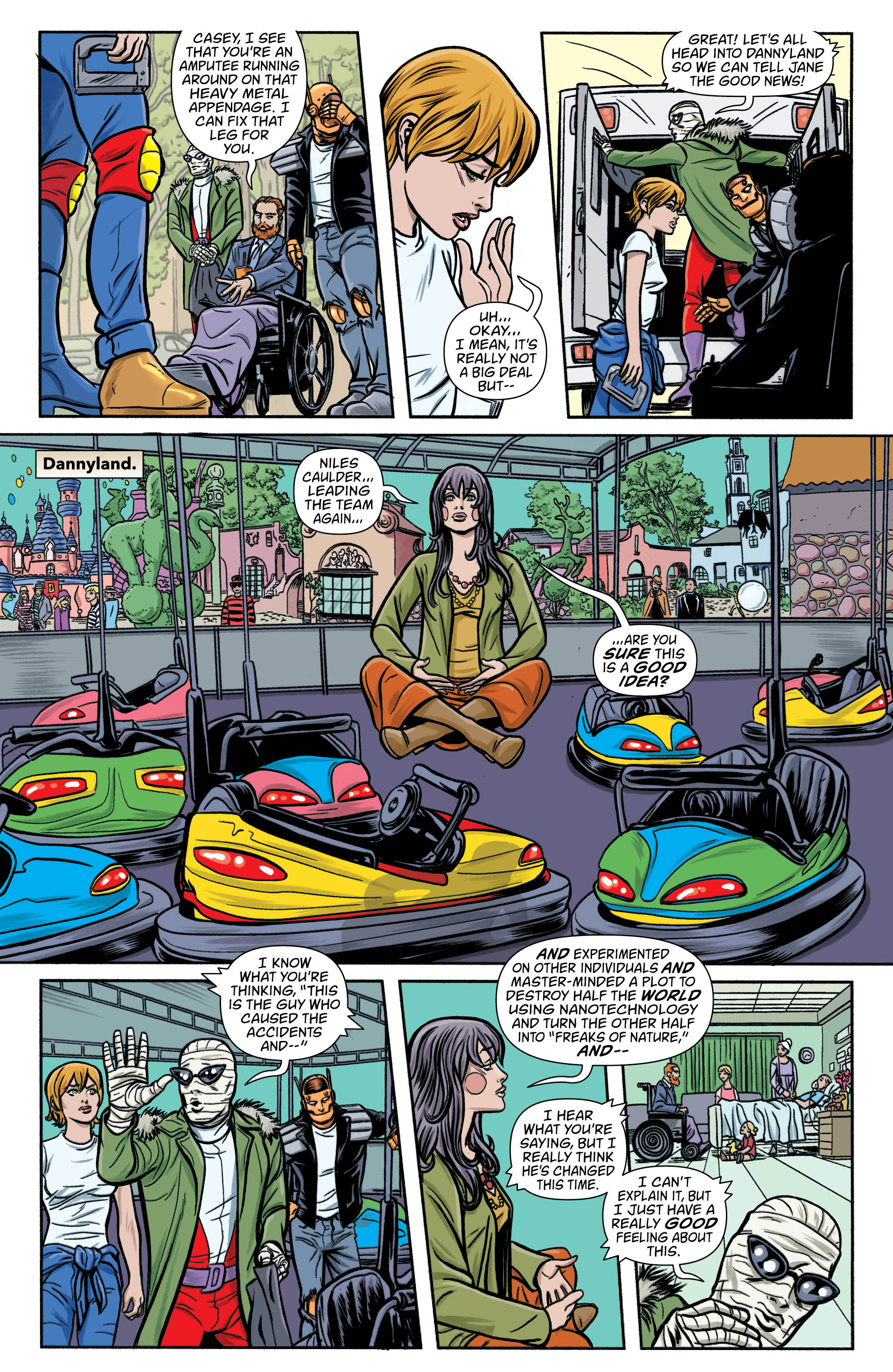