Discover The Witcher’s Literary Origins in “The Last Wish” Yes, we know – The Witcher is a great series of video games. As I’ve explicitly pointed out, the third...

Yes, we know – The Witcher is a great series of video games. As I’ve explicitly pointed out, the third installment may be one of the best roleplaying games of all time. It’s still being talked about ad nauseum, which is a delight; it’s a game that is still garnering attention almost a year after its release when many big-budget games should have overshadowed it, but CDProjekt Red’s masterpiece refuses to let up and give any other game the spotlight.

Books based on video games are nothing new; one look at your local Barnes and Noble’s fantasy section is sure to overwhelm you with Halo novelizations and expanded tales of Warcraft’s immense universe, but video games based on books are a bit less common. While there are countless games that have taken elements of writers and their respective novels (Ayn Rand’s influence on BioShock is duly noted), games of this caliber that are taking stories straight from the pages of a novel are slightly less common. Enter Andrzej Sapkowski, the Polish author who has gifted the world with Geralt of Rivia, The Witcher.

Geralt was given birth by Sapkowski in a magazine called Fantastyka in December of 1986 through a short story called Wiedźmin, which is what a Witcher is called in Polish. This short is contained in the first collection of short stories of the Witcher translated to English which was released in 2007 in a collection titled The Last Wish, although the Polish edition of the book was released 14 years earlier in 1993. It’s also important to note that, while The Last Wish is the chronological first Witcher book, and also the first to be translated into English, Sword of Destiny (Miecz przeznaczenia) was released to Poland in 1992 and would not become available in America until 2015.

The events in The Last Wish build the foundation for everything to come in further installments of Geralt’s adventures, including the establishment of Geralt and Yennefer’s relationship. Though it’s a collection of short stories, the framework of the collection makes it so that they’re all connected through a main storyline, one of Geralt recounting these tales while he recovers from an injury while doing his Witcher-work. It’s a great insight and an informative introduction to who exactly Geralt is in his most fundamental aspects, as it follows him in his actual day-to-day routine – fantastic as that routine may be.

One of the most intriguing details about Geralt’s adventures is that being a Witcher is his profession; the monster-slaying is done for coin. Through his profession, of course, it’s only natural that bigger events should arise and a character as strong in morals and willpower as Geralt would become involved with things bigger than himself, but The Last Wish lets the world take its own course and instead focuses on smaller, isolated incidents in Geralt’s life. While many fantasy books focus on the grandeur of heroic war and the intricacy of imaginary politics, in this first book Sapkowski instead opts for putting a magnifying glass to one of the most important, yet often-overlooked details in a fantasy world – the singular characters and how they behave when not being faced with the end of the world. Most of the stories involve Geralt meeting with someone, discussing an issue that needs to be solved, and then him riding off life a good-natured mercenary, but they all have deeper meanings and hold more themes than just a man killing monsters. For example, the most poignant paragraph has Geralt musing on the nature of mankind:

“People,” Geralt turned his head, “like to invent monsters and monstrosities. Then they seem less monstrous themselves. When they get blind-drunk, cheat, steal, beat their wives, starve an old woman, when they kill a trapped fox with an axe or riddle the last existing unicorn with arrows, they like to think that the Bane entering cottages at daybreak is more monstrous than they are. They feel better then. They find it easier to live.”

Sapkowski’s dialogue, though the translation can be a bit shaky at times, is wonderfully written and incredibly easy to understand while still retaining a sense of serious weight and importance; after reading The Last Wish, it’s baffling to me that more people have not read these books. They offer something incredibly unique and powerful to the fantasy genre – though millions will read Tolkien throughout their lives, Sapkowski, it seems, will unfairly be overshadowed by Tolkien’s popularity in America. It is my hope and sincere belief that over the passage of time, Geralt of Rivia will be remembered for being way more than just a character in a video game. 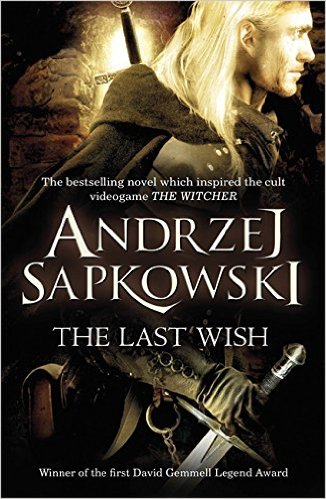