"The Uncanny" Boris Karloff is immortalized in The Mummy, one of Universal's most iconic films. 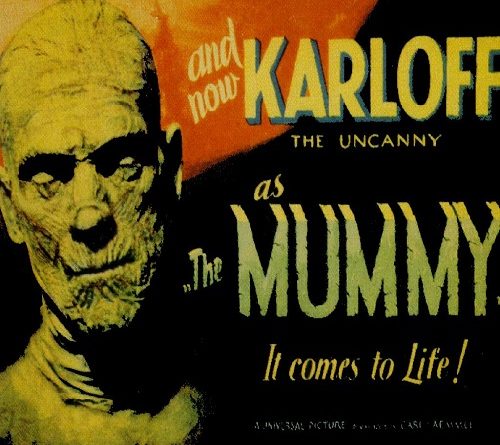 Nearly 100 years ago in 1922, Egyptologists Howard Carter and Lord Carnarvon uncovered the tomb of Tutankhamen. This discovery, along with the harrowing warning found inside, would ignite public interest in Ancient Egypt and create a surge of mystical theories about the curse that was opened along with King Tut’s tomb. Naturally, a movie would come along to ride on the excitement of the discovery. And what studio could be better to do so than Universal, now deep in their golden age of monster movies?

Following the trend of Frankenstein and Dracula (both released in 1931), producer Carl Laemmle, Jr. intended to make a film concerning a mummy based on a novel much like the previous two films. A movie based on a well-known novel would spark public interest even further. But when none could be found, screenwriter Nina Wilcock Putnam and Richard Schayer collaborated on a short treatment that would eventually come to be known as The Mummy. Karl Freund would direct the film, starring Boris Karloff in the title role. Though most remember Karloff as a mummified relic in the film, the actor only appeared in that makeup for a number of minutes – and was never even seen fully mobilized in those shots. The makeup, done by the legendary Jack Pierce, took over eight hours to apply and was considered highly painful to Karloff. Though it is true that Pierce’s masterwork was barely seen in the film, it became one of the most iconic images in all of horror.

Instead of a slow, crusty mummy stalking and terrorizing a town as most people remember, The Mummy actually sees Karloff reanimated and obsessed with bringing back his lost lover, who he thinks has been reincarnated into a young woman named Helen Grosvenor (Zita Johann). It’s a very moody film, relying on tension instead of jump scares, and is filled with mystical and slightly occult flavorings. Imhotep, the name of Karloff’s character, is a cynical madman, mummified alive for attempting a resurrection. In an especially scary sequence, Imhotep is shown being wrapped in bandages as he faces certain death with a look of pure terror on his face.

In reality, it’s a sick love story. And Imhotep is kind of a lunatic – the woman he was attempting to resurrect in his first life was Ankh-es-en-amon, who the disgraced Egyptian believes Helen to be. To do this, Imhotep must first stab her to death and then mummify her before resurrect her so that he can have her in her “true” form. Why Imhotep couldn’t settle for a couple of dates over coffee is beyond me. It’s people like him that give men such a bad name.

This is one of the great Boris Karloff’s best performances. His portrayal of the powerful yet disturbed Imhotep is legendary, with his otherworldly gaze and commanding voice. Karloff has the honor of being credited as not one, but two of Universal’s most enduring monsters, Frankenstein and The Mummy. Although many would come to play both of these characters in later films, the one who is most remembered for portraying them and doing it first, for that matter, is Karloff. His legacy continues long after his death in pop culture and the memories of countless fans.

The Aggregate-You are the captain of this story