In Defense of Pacific Rim On its surface, Guillermo del Toro’s 2013 film Pacific Rim seems like a standard giant robot vs. alien action film. But at its core,...
by Former Writers August 24, 2016 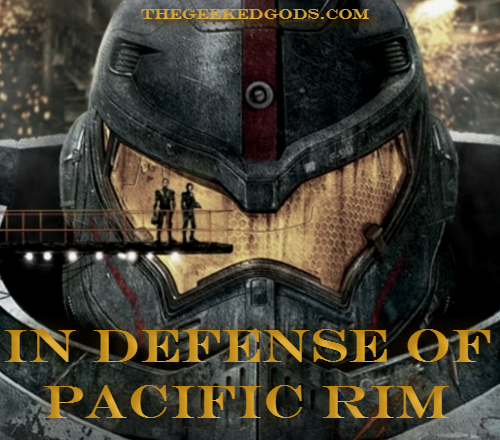 On its surface, Guillermo del Toro’s 2013 film Pacific Rim seems like a standard giant robot vs. alien action film. But at its core, it’s so much more. From fully developed (and flawed) characters to an expertly crafted, expansive world, Pacific Rim exudes an eternal message of hope and family for its viewers. It surpasses the dark and gritty superhero films we all love to hate and the lighthearted action films we all love to watch. Where many movies feel free to tread the same tired tropes with the same brooding protagonist, Guillermo del Toro puts a fully developed, diverse cast of characters through a nimble script that manages the task of taking itself seriously while having fun. It presents a world where, in the face of crisis, humanity unites around a common goal to prove they’re made of the sternest stuff.

Plus the sheer fun of it is refreshing. It is a robot vs. alien action film where Guillermo del Toro revels in the absurdity of the premise and invites the audience to enjoy it with him. How cool is that?

Unlike other action films, Pacific Rim wants to engage its audience in the wider world, so while the main plot follows everyone’s favorite puppy Raleigh Becket (Charlie Hunnam), the story wants to take the audience down this world’s seedy alleys to show off the living world that swirls around the main plot. The side references to the politics, religion, science, and economy of this world scattered throughout the film actually help sell the main (admittedly absurd) premise. Does it make sense that massive alien creatures are coming through a crack in the earth’s core? Nah. Does it make sense that an in-universe black market has built up around those alien creatures? Absolutely. The fact that that the script manages to dance in and out of this universe while remaining focused on the main plot is an immense credit to the screenwriter, Travis Beacham. If you’re as fascinated as I was by the economy of Kaiju guts or the Hansen family’s tragic backstory, del Toro and Beacham expand the universe into extra-textual material like the novelization, comics, and artbook. It’s a mark of how well del Toro and Beacham handle the extended universe that the audience doesn’t need to do their “summer reading” to enjoy the movie. The movie teases the audience that wants to learn more about this setting without ostracizing those who don’t.

Pacific Rim succeeds in making the audience understand the propaganda for this war-torn society. We as viewers get to sit in the room and understand that the wall makes no sense, but then we see how the propaganda sells that decision to the population. The movie lets us sit on both sides of military policy, where in the real world, we only see how those decisions are related to us. The movie makes the point early that the politicians aren’t necessarily stupid, they just know the Jaeger program isn’t working and they’re panicking. 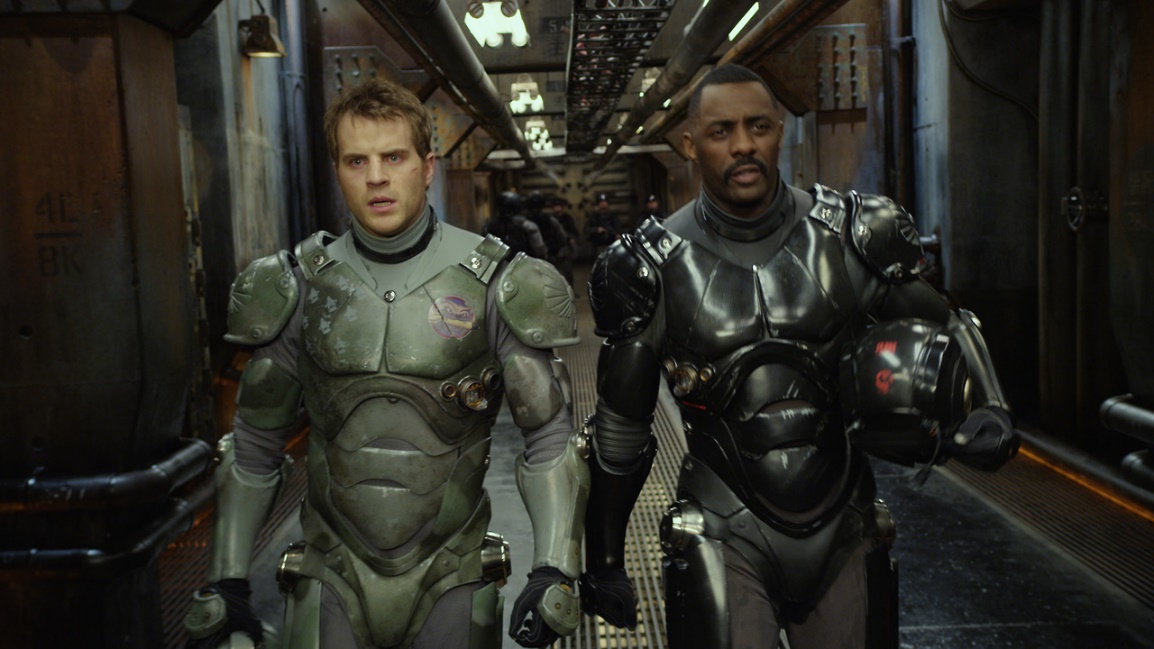 I’m a sucker for a good ensemble cast and Pacific Rim delivers. The two most powerful and compelling characters in the film, Stacker Pentecost (Idris Elba) and Mako Mori (Rinko Kikuchi), have the most complex and dynamic relationship, a found family struggling with accepting each other’s’ flaws. Pentecost must keep the Jaeger program functioning and defending Earth’s cities while balancing this vital role with his concern about allowing his extremely talented, adopted daughter to fight in a Jaeger. Rinko Kikuchi is the protagonist of the film. The film makes an attempt to place Raleigh Becket at the primary character, but the themes and story arc can’t help but put Mako Mori front and center. Thankfully, Kikuchi shines in the role and easily takes on the leading role the movie puts her in. The cast includes bickering scientists Newt Geiszler (Charlie Day) and Hermann Gottlieb (Burn Gorman), Australian father-son team Herc (Max Martini) and Chuck Hansen (Rob Kazinsky), badass Russian husband and wife team Sasha (Robert Maillet) and Aleksis Kaidanovsky (Heather Doerksen), black market dealer Hannibal Chau (Ron Perlman), operations officer Tendo Choi (Clifton Collins Jr.), and Wei Tang triplets (Charles, Lance, and Mark Luu). While some of these secondary characters are less developed than others, the overall environment created by this ensemble feels like one that might actually exist in an apocalyptic alien invasion. Egos clash, some people think they’re superior to others, but Idris Elba as Marshall Stacker Pentecost is the fixed point that holds the Jaeger program and the film together.

Ramin Djawadi’s soundtrack is one of my favorite film albums. del Toro cites Djawadi’s score as “[having] a grandeur, but they have also an incredible sort of human soul.” I’m inclined to agree. I put on the Pacific Rim soundtrack when I need to be productive and feel alive. There’s a sense of urgency to the score that echoes the immediacy of the issue at hand.

By far the best part of Pacific Rim is the message that hope is eternal. Stacker Pentecost’s iconic speech continues to bring chills to me when I watch it. “Today we are canceling the apocalypse” is a rallying call to humanity. When all seems lost, the humans in Pacific Rim take things into their own hands and kick some alien butt. Each of the Jaeger pilots train knowing that they may not return from each battle but that they will help save the world in the process.

So many movies, and in particular so many summer action movies, end up painting a picture of humanity as untrustworthy and cynical. The humanity of summer blockbusters turns on itself and gives up on the world when put to the test. Pacific Rim’s humanity has boundless hope and a zeal to protect each other. That humanity is at the core of Stacker Pentecost’s declaration that “Today, we are canceling the apocalypse” and willingness of Jaeger pilots to die at the bottom of the Pacific for the chance at keeping humanity safe. Pacific Rim hopes the humanity that makes up its audience to be the same humanity that it puts in the Jaegers. For me, after enduring another summer of “gritty,” “dark” action pieces, that’s a breath of fresh air.

“This piece was co-written by Michael DeMichillie and Caitlin Postal”

Reason’s why we are excited for Marvel NOW 2.0