Danny Luckert has truly knocked it out of the park with his art in this debut issue.
by Paul Aloisio April 12, 2017

Fair warning: if you’re squeamish about bugs, Regression #1 may be a bit hard for you to handle. After reading, you just may find yourself cuddling up with an industrial-sized can of Raid at night.

Cullen Bunn’s first series with Image concerns a man named Adrian who is afflicted by waking nightmares of creepy crawlies and things that are better left crawling in the dirt. Insects buzz and multiply by the hundreds out of people’s eyes and ears, but Adrian is the only one who can see them. His friends think he may be on drugs. Adrian is, simply put, a mess. 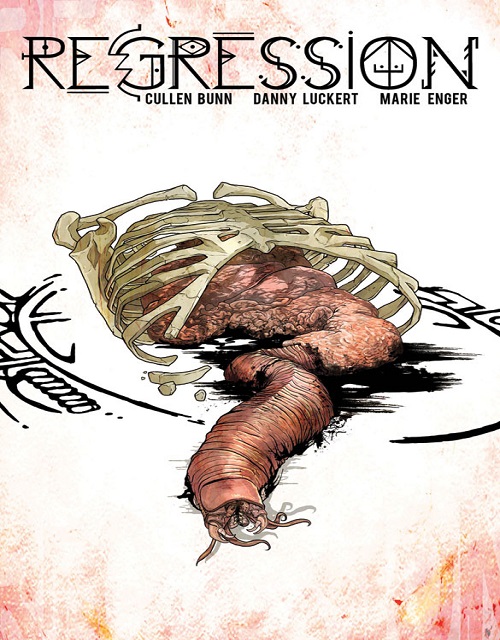 Reluctant as he may be, Adrian agrees to participate in a session of regression hypnotherapy and examine his past lives to hopefully cure his problem. He witnesses scenes of violence and madness, and his daytime terrors are worsened. But even more terrifying is that something malevolent has followed him back.

Fans of gross-out horror flicks will be pleasantly surprised with Regression, as many of the panels are filled to the brim with images of pure disgust and squeamish terror. Danny Luckert has truly knocked it out of the park with his art in this debut issue. Character designs are excellent and they walk a fine line between realism and the traditional comic book style art. Though it’s not particularly gory – not yet – Luckert does a fine job at curdling your blood all the same with the numerous insect sequences. If I seem fixated on the whole bug aspect of the bug, it’s because I am.

At the end of the issue, I was sufficiently grossed out yet filled with intrigue at the story Bunn has concocted. Despite the fact that I warned the squeamish about what may be in store for them, I absolutely recommend fighting through your bug aversion and soldiering through the book. There’s a chilling mystery here in Regression just begging to be uncovered and I would hate for anyone to miss out on it.

Regression #1 is fairly straightforward, but it’s exactly the type of issue that hooks you in and digs its claws deep into the reader, setting us up for what is sure to be a wonderful (though undeniably scary) exposition. It gets to the point quickly and makes its point crystal clear. I find that many debut issues focus too much on ambiguity and leaves the reader with too many questions. On focusing on just one aspect – here being Adrian’s possible psychosis – Regression opens up simply which allows the book to explore other plotlines further on down the road.

Likewise, Danny Luckert’s artwork and Marie Enger’s color palette are phenomenal but not overbearing. I cannot praise his art enough. We are treated to stunning full page spreads and clever panel placement, yet even in the smallest of panels the detail is pristine and digestible – despite the horrific subject matter, that is.

Regression #1 will be released on May 10th, 2017. In simplest terms, you’d be a fool not to pick it up. More details can be found here through the official Image Comics website. Bug spray not included.