Death of Stalin Graphic Novel Review By Rachel Bellwoar There are a lot of lessons you can take from The Death of Stalin, most of them what not to... 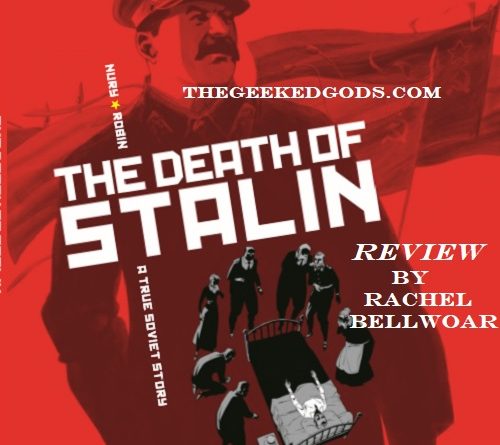 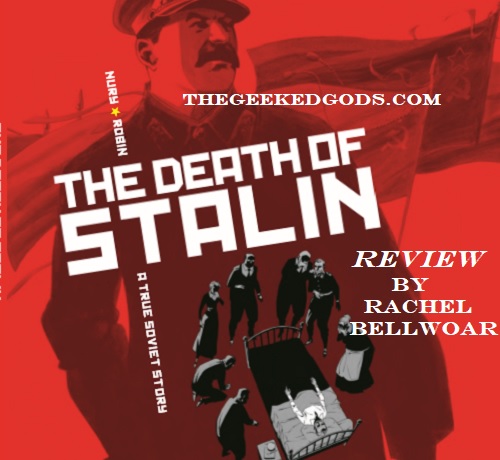 There are a lot of lessons you can take from The Death of Stalin, most of them what not to do if you want to keep your soul intact, but if there’s one lesson that rises above the rest, it’s what little good it does to rule by fear. Stalin did this incessantly, and it’s why, inevitably, The Death of Stalin is a work of fiction. Inspired by real events, but always doomed to run into trouble confirming them, Stalin and his Central Committee were old hands at keeping information close and naysayers censored. What Stalin didn’t protect was his favor among the members of his Central Committee. In his dying days, he pays a price for being feared.

Following Stalin’s stroke in March 1953, Death of Stalin tracks a series of blunders, each more horrible than the next, of Stalin’s men defeating their own efforts to get Stalin help. Much of this comes from the fear Stalin instilled in them not to make decisions on their own. From a radio station director to the members of the Central Committee, no one wants to take full credit when it means they might get full blame. Choosing a doctor for Stalin becomes a much more stressful decision than letting his health take its natural course. 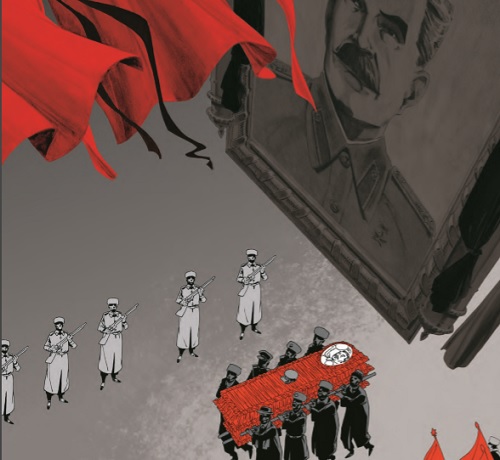 The better to expatiate on these moral dilemmas, Death of Stalin comes at its story from all angles. You have the Committee, so focused on protocol and career advancement, that they ignore the urgency of Stalin’s condition. You have civilians, who blindly love Stalin and the danger of that adoration, and you have the fact that there are reasons in vast abundance not to help Stalin out. Can these reasons make the Committee’s stalling somehow right?

Politics is always complicated, but perhaps the most important thing The Death of Stalin does is make no one in this story innocent. There’s usually some point on which a character’s sympathetic but nobody is entirely likable, and there’s no shortage of treachery going on behind the scenes. It’s not that characters behave unrealistically. It’s that they don’t show any restraint that can be shocking. 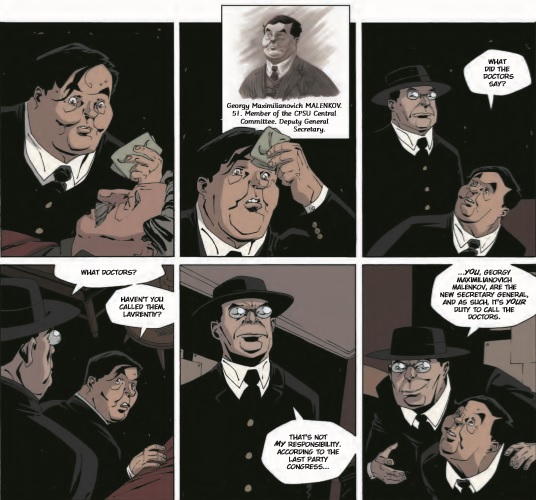 Soon to be released as a movie by Armando Iannucci, who created the TV show, Veep, it’s not a stretch to hear writer, Fabien Nury’s, dialogue as an episode of the HBO comedy. Death of Stalin might put less weight in expletives, but it shares the same knowledge of truth being worse than people imagine. In some scenes, particularly those featuring Stalin’s son, the truth might surpass its capacity for humor.

Thierry Robin’s art provides the double-talking imagery essential to an honest political thriller. Scenes, where characters are on the phone, are especially freeing for letting politicians show their true colors, and to go from their expressions during these private moments, to the posturing of their professional portraits (Thierry uses portraits to identify everybody), is to see how gross they can be. The innocuous lettering for the phone’s ring gives readers no warning of the sliminess about to come. 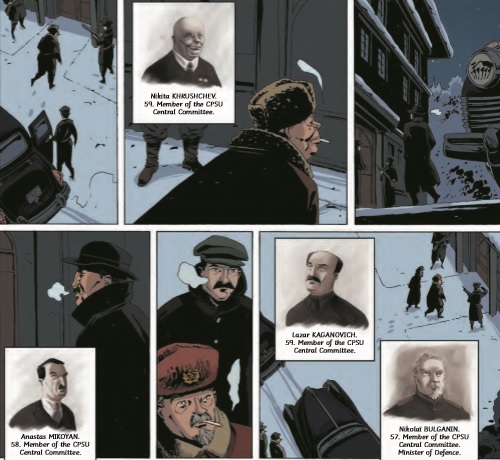 As for the book’s choice not to expand on what’s true, and what’s rumored, this isn’t the first graphic novel to straddle the line between fiction and non-fiction, but some direction on where to begin separating the two seems wanted. The events described are extreme, and that in no way means they didn’t happen, but it’s tough to know how to feel when it’s over. Death of Stalin covers a fascinating stretch of history and for a book to garner a cast the caliber of the film adaptation, you know it must be exceptional.