A.D.: After Death Comes to a Stunning Conclusion in Issue 3

All good things must come to an end - even in the absence of death. 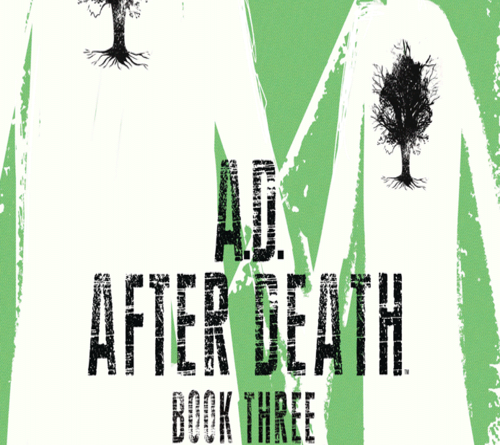 Jeff Lemire and Scott Snyder’s A.D.: After Death comes to its conclusion in book three, in which Jonah Cooke’s journey beyond a life where death does not exist comes to a stunning and powerful end. Continuing what was started in the first installment, this deeply personal science fiction tale is told through a unique combination of prose and watercolor artwork, acting very much as an experiment in mixed media. Though the lack of a fluid illustrated storyline may throw some readers off, those who give A.D.: After Death their full attention and emotional investment will be greatly rewarded.

In an effort to avoid spoilers, I will refrain from writing about exactly what is revealed at the end of the story. Nevertheless, I can assure you with full confidence that the conclusion is unexpected yet deeply satisfying. If the previous two issues didn’t force you to think about the heavier aspects of life and death, this third issue most definitely will. But at the same time, I would have a hard time believing anyone who said that the previous issues didn’t think of life from a different perspective in the first place.

Lemire’s artwork is beautifully done, but there are parts where it felt like his art was simply absent. Possibly due to how deeply this issue needed to go into exposition to finally resolve the story, there seems to be much less artwork than we’ve seen thus far. If Lemire’s art wasn’t so mind-blowingly gorgeous, I probably wouldn’t have any issue with it; however, I was hoping for more art to carry the story forward towards inclusion. Instead, we have the opposite; Cooke looks back at his life and what brought him to his current position. To do this, Snyder really digs deep into the character’s psyche. It’s a selfish complaint on my part without a doubt – look, I really just wanted Lemire and Snyder’s partnership to continue in After Death for just a little longer. Is that so hard to ask?

However, when Lemire’s art is present, it is the best it has ever been in the miniseries thus far. There are plenty of excellent action scenes with vibrant hues of purple and an otherworldly environment. Though the implications of Cooke’s actions have been huge, the world in which the character exists in seems very, very small. It’s as if we are looking straight into the mind of this bighearted thief and seeing the world through his eyes.

A.D.: After Death has been nothing but an absolute pleasure from beginning till end. Lemire and Snyder is a match made in heaven and I hope that we are able to see more from them in the future. A live-action adaptation of this story is currently in the works and I am incredibly excited to see how Jonah Cooke’s story comes to live on the screen. Snyder sure knows how to write a story – that much is apparent. This is a must-read; a series that is sure to become a modern cult classic.