For years Colleen Wing quietly kicked ass and solved mysteries, never caring if you knew her name. Now that she’s a star of a major TV franchise (and by...
by Jake Hill April 5, 2017

For years Colleen Wing quietly kicked ass and solved mysteries, never caring if you knew her name. Now that she’s a star of a major TV franchise (and by all accounts, the best part in her little corner of it), it’s time to ask: who is Colleen Wing? Where did she come from, and what are her most famous adventures? 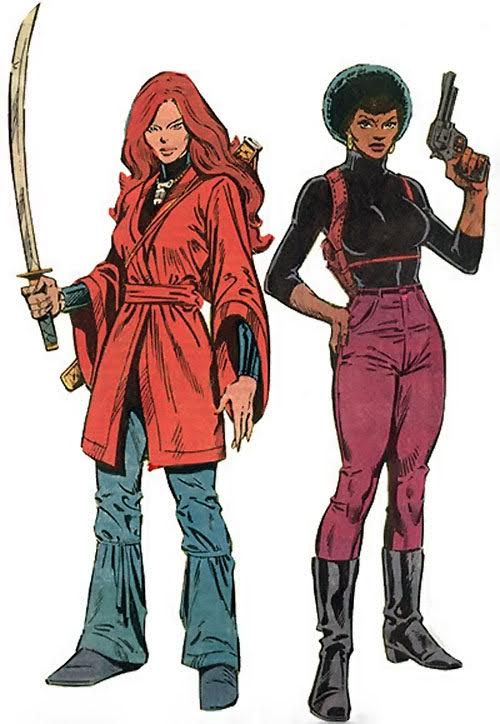 Colleen Wing made her debut in “Marvel Premiere” #19, in an issue by Doug Moench and Larry Hama. “Marvel Premiere” is the same anthology Iron Fist first appeared in, to capitalize on the popularity of Bruce Lee and the martial arts craze. Colleen was introduced as a supporting character in the 10 issue Iron Fist story that ran from issues #15-25.

While her origin story has been retconned a few times, a few things are always the same. Colleen’s father was a teacher of Asian Studies at Columbia University, but when her mother died, Colleen went to live with her grandfather Kenji in Japan. He was a grizzled old samurai, and he taught Colleen everything he knew.

It’s simple, but awesome. Colleen has ties to countries on both sides of the Pacific, and is one of the last people on Earth to be legitimately trained under the Code of Bushido. She wove in and out of Iron Fist’s early stories, but met up with Misty Knight, and the two of them became an inseparable duo, who still work together in comics today. Their combined awesomeness is called the Daughters of the Dragon. Later, they would legally purchase the trademark of Heroes For Hire, the name originally given to the duo of Luke Cage and Iron Fist. Legally speaking, within the Marvel Universe, Colleen and Misty are the current Heroes For Hire.

Iron Fist was eventually promoted out of “Marvel Premiere” into his own self-titled series, and Misty and Colleen continued to be major supporting characters. The new “Iron Fist” series was written by Chris Claremont and John Byrne, who are most famous for introducing 80% of the X-Men you know and care about. Claremont wrote X-Men from 1975-1991, in one of the longest uninterrupted runs ever on a superhero title. 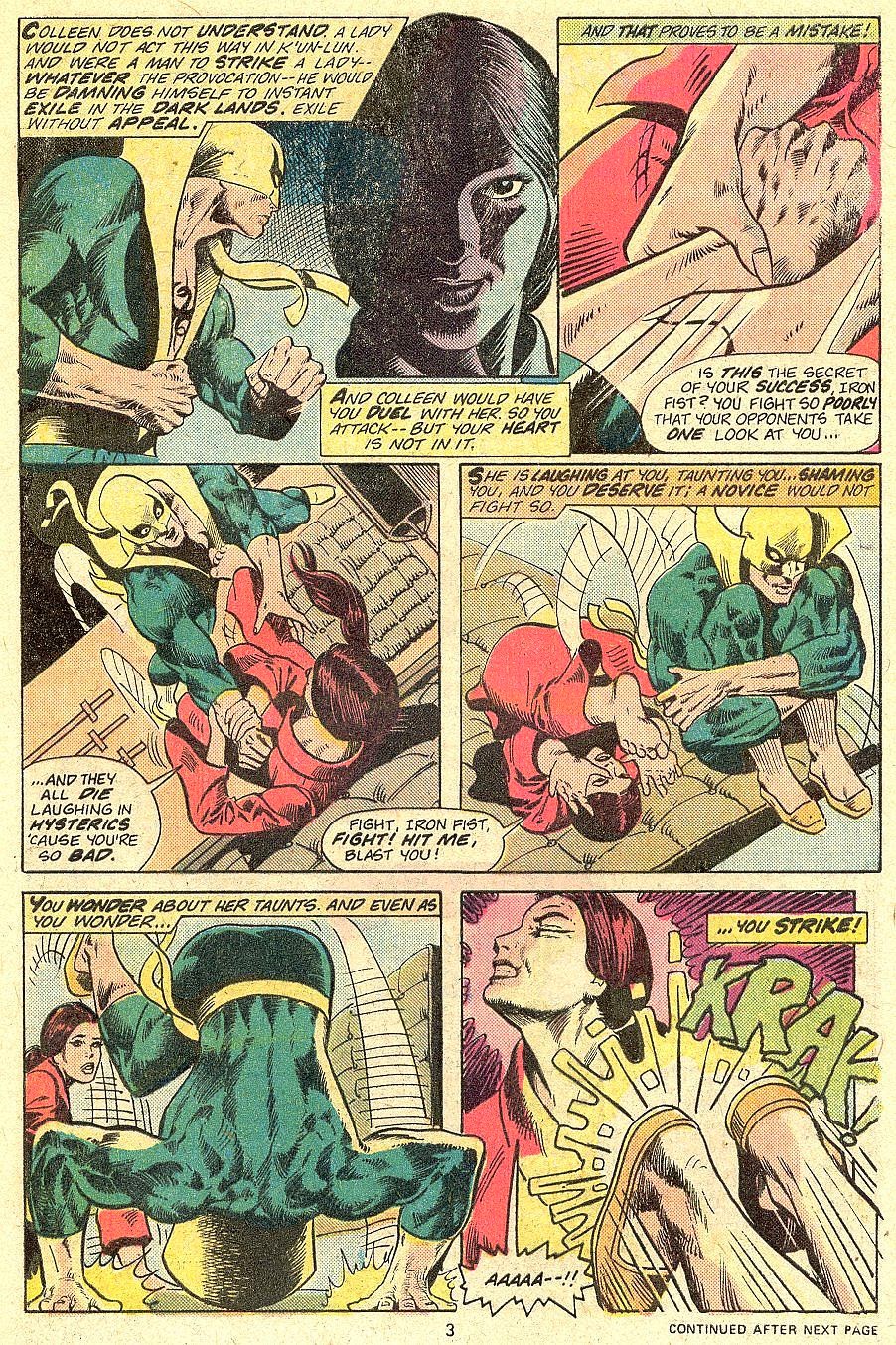 This is relevant, because in those days, Marvel writers liked to have characters cross over from various titles that they wrote. That’s why, over in his “X-Men” book, Jean Grey and Misty Knight were roommates. That’s also why Sabretooth first appeared as an Iron Fist villain, not a Wolverine villain, and battled Colleen a number of times. It may seem crazy to people most familiar with the modern incarnations of the characters, but at this time in the comics, Colleen had a huge crush on none other than Cyclops!

If you want to catch the continuing adventures of Colleen Wing, you can most easily find her in “Power Man and Iron Fist,” a comic that has aged surprisingly well, mostly written by a man who was then known as Jim Owsley, but who later published comics under the name Christopher Priest. Priest is one of the early black voices in comics, and his stories are fun and pulpy to the extreme, but aware of the racial dynamics between a bulletproof black man, a black cyborg lady detective, a white martial arts master, and a Japanese-American samurai.

Colleen in the Modern Age 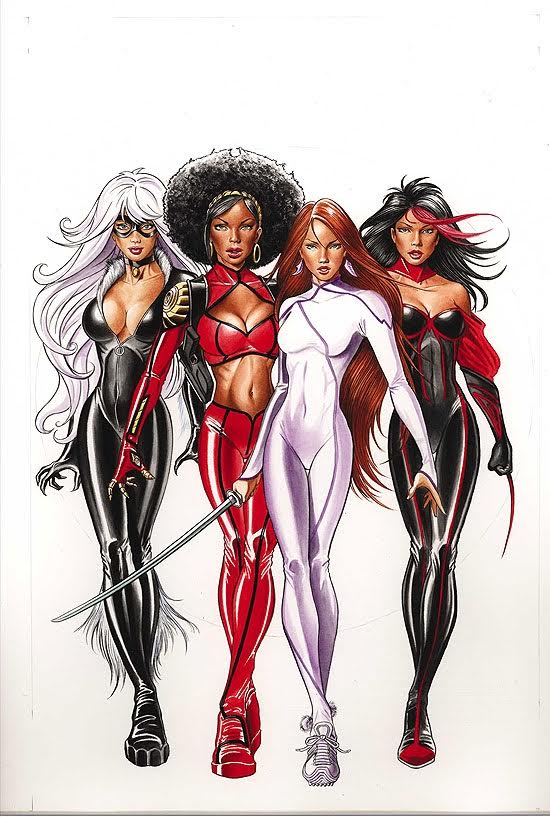 The 90s weren’t a prolific era for Colleen, though she did appear in the 19-issue “Heroes For Hire” comic by John Ostrander and Pasqual Ferry in 1996. Jump ahead ten years, and “Civil War” breaks out, hijacking most Marvel titles.

This ended up being a good thing for fans of Colleen Wing though. Marvel used “Civil War” as a launching pad for all sorts of books they may not have tried otherwise. One of them was “Heroes For Hire,” the first real Colleen Wing and Misty Knight ongoing, where the detective duo lead a team of bounty hunters going after unregistered heroes. It’s a cool team book, that puts the focus on lots of supporting players from “Power Man and Iron Fist,” including Tarantula, Black Cat, Shang-Chi, and Paladin. The series changes creative teams a bunch of times, so the quality varies, but the premise is solid. Misty and Colleen even got a spin-off, the first “Daughters of the Dragon” comic.

Then, in 2006, two writers came together with a superstar artist, and made my favorite superhero comic of all time. In Matt Fraction, Ed Brubaker and David Aja’s “Immortal Iron Fist,” the focus is solidly on Danny Rand, but the other stars of the Marvel Netflix shows all make appearances, including Luke Cage, Misty Knight, Night Nurse, Jeryn Hogarth, and Colleen Wing. Fraction brings his quips and vulnerable characters, Brubaker can map out a solid mystery plot, and Aja draws some of the most gorgeous, stylized action ever.

Although Colleen is mostly a background player, this is the book to see her at her best. She’s the coolest and most collected of the whole gang, at times stoic, and crazy deadly. She and Misty love each other more than any other characters in comics. The whole run is excellent, and it’s only flaw is that there isn’t more Misty and Colleen. 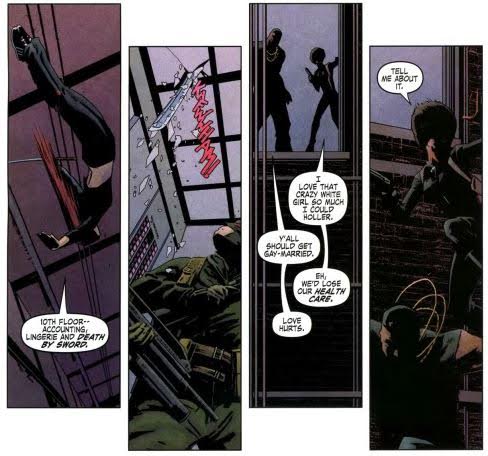 More recently, Misty has made many appearances while Colleen has been relegated to the background. Colleen did get a solo miniseries in “Shadowland: Daughters of the Shadow” and make brief appearances in the very good 2010-2011 “Heroes for Hire” (and “Villains for Hire”) series, and the Misty Knight led “Fearless Defenders” in 2013. But big appearances of been scant.

With her acclaimed role in a new TV series, it’s likely there’s going to be more Colleen in the future. She’s already confirmed to be showing up in the “Defenders” show, and Brian Michael Bendis has a new comic called “Defenders” coming out soon, that will probably feature Colleen in some capacity. With demand as it is though, long-time Colleen fans may finally get what we’ve always wanted: a “Daughters of the Dragon” ongoing series!