By now you’ve probably seen the trailer where Charlize Theron pummels someone with her heel and creates a black umbrella diversion. That movie’s Atomic Blonde and it comes out...
by Rachel Bellwoar July 26, 2017

By now you’ve probably seen the trailer where Charlize Theron pummels someone with her heel and creates a black umbrella diversion. That movie’s Atomic Blonde and it comes out in theaters this Friday. It’s based on the 2012 graphic novel, The Coldest City, and tells a story of Cold War espionage set in Berlin before the Berlin Wall falls. The first few pages are the immediate response to the wall coming down, but when MI6 spy, Lorraine Broughton, comes in on a Saturday to give her report, the sight of a tape recorder is the cue for the narrative to go back two weeks. 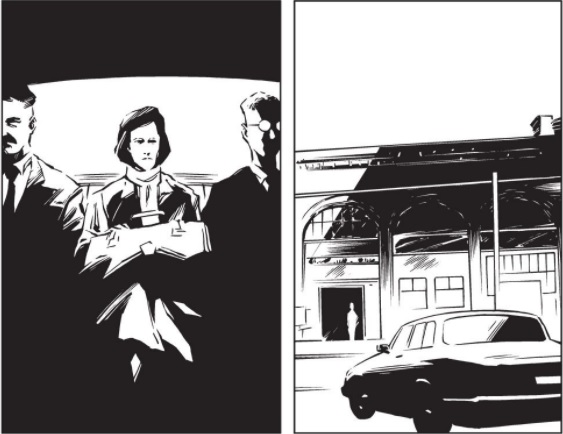 She was assigned to Berlin to retrieve a list that reportedly names every spy stationed in the city. The British spy carrying the list was killed, and the Stasi officer who provided the monikers lives in East Berlin. For her first trip there, Lorraine is tasked with making sure the information doesn’t land in the wrong hands, yet we also know in the present day her superior officer was killed and someone wearing heels was at the scene.

The first thing to realize about Coldest City is all that gun firing, freezer door slamming action is much more subdued and restrained in the book. It’s the threat of violence that looms large, and Sam Hart’s art is the spot-on complement to Antony Johnston’s words. Full disclosure, that’s not what I thought initially, but Hart’s art requires an adjustment period before it sinks in. Completely black and white, the ink is blocky and hard in a way that’s unappealing and harsh to make out but, when you think about it, exactly what a murky, spy drama needs. You can’t see the truth in a person’s eyes when their sunglasses reflect your image back, and arbitrary panels of strangers concede to paranoia’s hold over the story. Not being able to discern who somebody is becomes an asset to putting yourself in the mindset of characters who consistently distrust and need to cast blame. 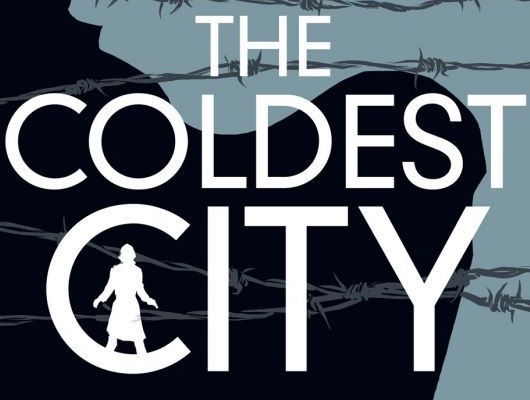 Besides that, the opening pages depicting the wall coming down are a statement unto themselves, divided into three, horizontal panels. The middle is filled-in black, with white lettering to provide the title and top billed creatives. It’s a wall, with locals celebrating in the top panel and spies questioning what it means in the bottom, and when the main spy mentions “Some of them are saying there’ll be no more secrets, from now on. But you and I both know that’s not true,” you have this figurative wall in the middle of the page, supporting his view of how little’s changed. 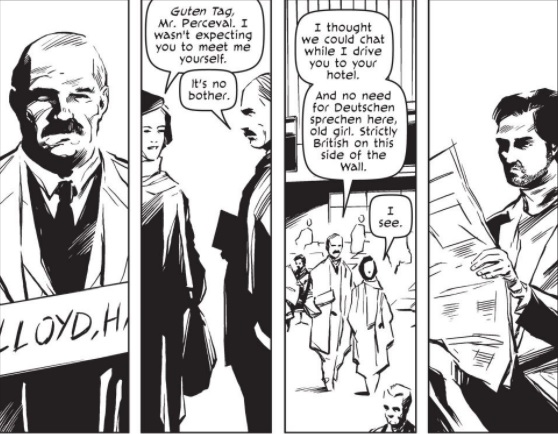 Johnston writes with a sense of humor (the calling into work on a Saturday apologies that mask a regular routine) and the name calling raises some interesting insecurities for folks who are supposed to have it together for their job. This may be an unfamiliar reference, but if you loved SundanceTV’s Deutschland 83 (the show boasts a similar soundtrack), or any suspenseful, spy thriller, The Coldest City is a seamless appetizer to Atomic Blonde, the film.