Marvel’s “Civil War II” has come and gone, a media blitz that consumed most of its line for the better part of a year. I was apprehensive about the...
by Former Writers February 15, 2017

Marvel’s “Civil War II” has come and gone, a media blitz that consumed most of its line for the better part of a year. I was apprehensive about the event, given the original “Civil War.” Though it’s lauded now, it’s easy to forget that the original mini-series was plagued by delays and poorly set up character actions. “Civil War II” unfortunately didn’t get to change much about that. 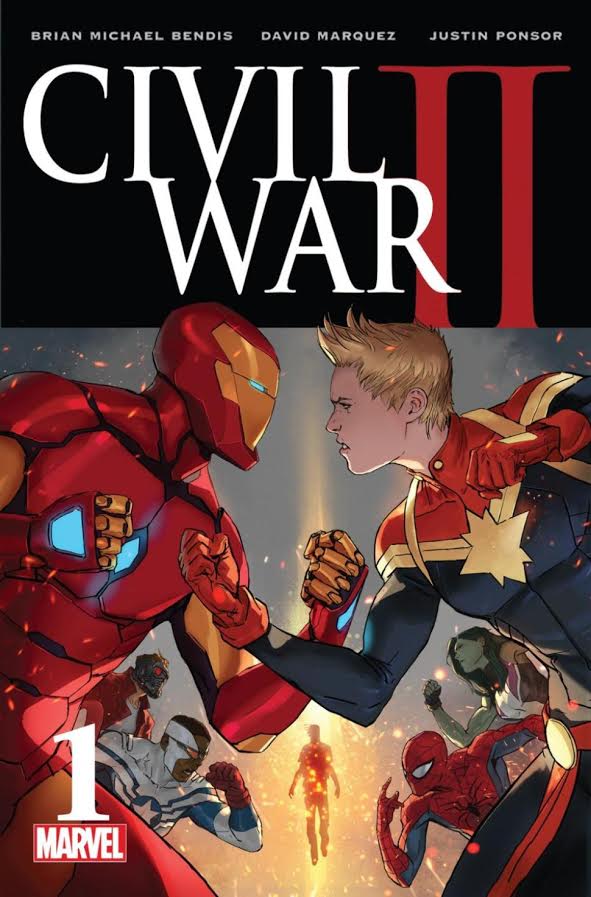 Despite a marketing push and a huge name, “Civil War II” still fell victim to delays and slow story telling.

“Civil War II” was hit with delays as the series hit its mid-point. The series, originally slated for seven issues with the finale dropping in October, went eight issues long and ended in December. The surprise additional issue seems to be Marvel’s new, favorite marketing ploy. They did it last year with “Secret Wars,” the line-wide, world shifting crossover that was slated for eight issues but ran for 9. The delays in “Civil War II” meant a two-month wait between issues 4 and 5. Tie-in stories began to run early, with “Infamous Iron Man” and “Champions,” two stories spinning directly from “Civil War II” ramifications, launching before the finale. This isn’t terribly unusual. The original “Civil War” saw the main story delayed a few times, with spin-offs and tie-ins similarly delayed to prevent spoiling the stories ending. “Secret Wars” was delayed before its finale, and as a result elements of it’s ending (such as the supposed death of Reed and Sue Richards) were teased, if not spoiled in related books.

Unlike the original, though, “Civil War II” suffered from an overall weaker story. The set-up has potential: Ulysses, a new Inhuman, can read the future. Captain Marvel wants to use this ability to stop crimes before they happen. Iron Man thinks the ability isn’t foolproof and wants to be cautious. But when Captain Marvel acts on a vision to stop Thanos from invading Earth, War Machine is killed, and Iron Man goes all in on stopping Ulysses. From here the story almost wanders, weaving in and out of tie-ins and meandering through the bulk of its issues. The best example of this is the big moment when the heroes finally clash in issue #5. It’s a disappointing mess. The heroes spend the bulk of the fight talking to each other, making witty comments and explaining why they’re fighting on their respective sides. Things like this should have been set up already! As a result, the story all but grinds to a halt until the final page. 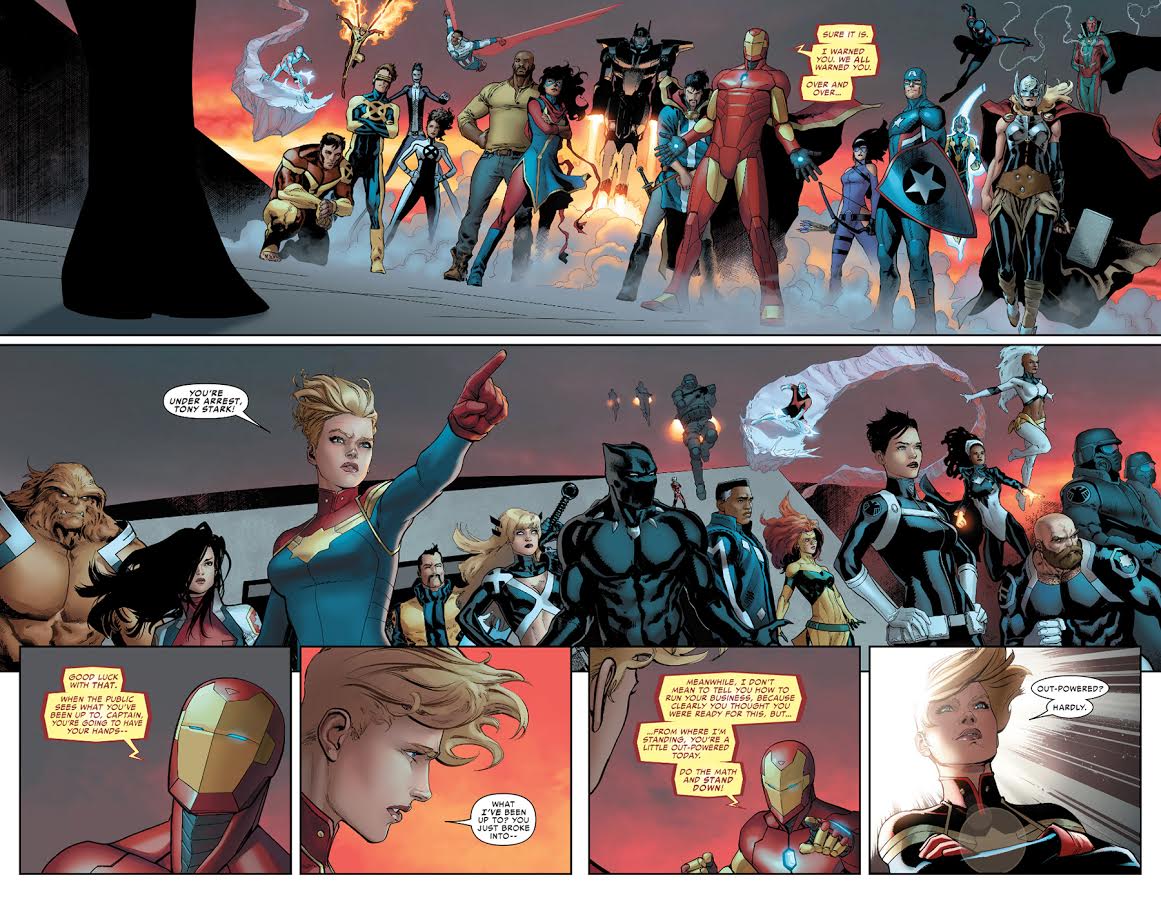 “Civil War II” regularly grinds to a halt to have characters explain themselves again.

This all culminates in it’s non-ending. “Civil War” made national headlines with it’s ending, which saw Captain America surrender and subsequently assassinated in his book the next month. “Civil War II” attempts to replicate this with the tease of Captain America’s death on the steps of the United States Capitol, culminating in a throwdown between Captain Marvel and Iron Man. Iron Man is left in a comatose state; explicitly stated to be not dead, but with tech built into his body that cannot be disturbed (Tony himself is still around in “The Invincible Iron Man,” albeit as an AI hologram). Ulysses ascends to a level above humanity and suddenly vanishes. Captain Marvel feels terrible for a few pages and then goes back to business as usual. “Civil War II” doesn’t seem to offer up much in terms of changing the status quo. The biggest shifts in the Marvel Universe, such as Captain America becoming the Director of S.H.I.E.L.D. or the X-Men and Inhumans going to war over their continued survival, are happening in other books. In fact, “Civil War II”’s biggest fallout comes some time after it’s finale in “USAvengers” #2. Here we find out from a time-traveling Danielle Cage that in a possible timeline, Thanos’s arrival on Earth heralded the start of a war that would kill most heroes; in short, we learn that after all that, Carol made the right call.

“Civil War II”’s shining light – a focus on the next generation of Marvel heroes.

Fortunately, “Civil War II” did do one thing right. The next generation of heroes play a significant part in the story, and their perception of events highlight the madness taking place. Spider-Man (Miles Morales), Nova and Ms. Marvel are torn between the two sides. When they’re ambushed with a vision of Spider-Man killing Captain America, their allegiances are put into question as they begin do wonder if they chose the wrong side. The characters do some serious growing up as a result of the story, with Ms. Marvel losing faith in her idol and Miles beginning to wonder if the violent feelings he has are going to control him as he grows older. The three eventually spin off to form their own team, The Champions, choosing to believe that they can still be heroes. After nearly being killed by Thanos and her cousin, Bruce Banner, being murdered, Jen Walters (aka The Sensational She-Hulk) is dealing with PTSD in the amazingly well-done “Hulk”. Meanwhile, RiRi Williams has replaced the fallen Stark as Ironheart, and Doctor Doom has taken up the mantle of Iron Man, a decision spinning out of his role in “Secret Wars.”

I ultimately felt let down by “Civil War II.” Maybe that’s just me being jaded after reading comics for so many years. But in the long term, with the focus on new heroes and the next generation, I do feel a touch of hope. Marvel’s already moved on to their next events: “Inhumans vs. X-Men” is currently going on, and “Secret Empire” starts soon. “Civil War II” will soon be but a blip on the radar in what I hope is a fun and exciting future for the Marvel Universe.