Now there are plenty of Zombie series on TV, in comics, and in literature, but in literature, it can be hard to decide which series you want to try (considering a good number of them aren’t truly that great). Charlie Higson’s The Enemy does not disappoint. It’s a horror series for kids ranging 13 and up, but it’s a fantastic series for adults too. There are so many things I love about this series, and I wish I could touch on them all, but for now, let’s discuss just some of the things that make The Enemy one of the greatest zombie series of all time.

The Enemy is set in London for most of the series, and just outside of London for a brief time for the introduction of more characters and explanation of why the apocalypse happened. The first book we are introduced to a small group of survivors living in a Waitrose (British grocery store) and read as one of their own is taken by the infected. The infected are all people 16 years of age or older (Original version is 14 or older), which, again, is explained in one of the later books in the series. The Enemy has a plethora of characters as you’re introduced to new people every book. Despite having so many characters Charlie Higson did an incredible job on every one of them, making them so realistic you’ll cry, or cheer at just about every death.

While you do follow groups of kids throughout their survival war and diplomacy are still at play, as each group has a leader, territory, and ambition for something more whether it be land, power, or simple peace. While some leaders call themselves King and plan to rule over every other group in the surrounding area, others take a more diplomatic approach, and still others a militaristic or scientific approach to running their groups. The kid’s survival instincts eventually took over, and they began governing themselves (dare I say it, better than most adults in apocalypse scenarios do). While being a king might, at first glance, sound a bit childish to adult readers, it makes sense. They’re in England, a land governed by kings and queens since the beginning, so kingship sounds about right. The very fact that kids, at the ages of 14 and 15 were able to begin running their own governments, is impressive and makes this a great series to read.

The character development in the series is on point, and much better than most other series out there. Using teenage characters is such a great opportunity to character development that many authors just don’t utilize, but Higson takes advantage of the fact that these are teenagers trying to survive without the help of grownups. He understands that they have been doing this for about a year when the books begin, and he never belittles their actions; they are simply good or bad, right or wrong. Are some of the characters childish, and stupid? Yes! It makes sense for some characters to still be immature, even a year in, while most other characters will have matured faster due to the stress of the environment, leading their groups, or contributing in whatever way they do. It’s beautiful to read about the characters changing so much in the short time the books take place.

The Zombie’s themselves are interesting beings. The virus that swept through England and the rest of the world killed many and those who didn’t die turned into something far worse. The infected of this series are known to the groups by different names, such as sickos and grownups. These grownups are not intelligent, most of them anyways, but can easily overpower a small group of kids with numbers as most infected do. The few smart grownups in the series can overwhelm a small group of kids almost on their own. One thing that sets this book above many others is that the reader gets to dive into the mind of an intelligent grown up, “Then he smiled. The man was him. It was a… What was it? A mirror? A window? A flexion? Yes. He was St George. A crusader. That made him happy. To remember hard words like that,” (The Enemy, Book 1). Charlie Higson was able to write even the most intelligent of grown ups into mindless animals, and it works remarkably well. 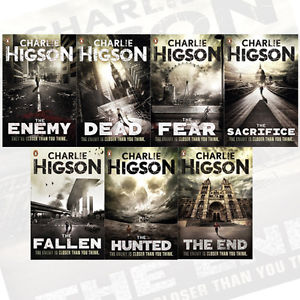 All in all this series is one of the best zombie series out there with 4.16 stars on Goodreads, and 4.2 on Barnes and Noble, it’s top of the line. Higson had an amusing writing process for this book, using his son (who was about nine at the time) as a guinea pig for his book until he came crying to his dad about nightmares. I think doing that is a huge part of what made this series a success, also the blood and gore getting bloodier and gorier with each book. I know that I am never going to do this series justice, though I could go on forever about it. If you’re looking for a new zombie series to get into, and you want one of the best out there, then look no further than this, The Enemy.