“Change is neither good or bad it simply is” Don Draper

By Ash @thatguyash1018 It’s time to grab an old-Fashioned and drink at work……(Please do not drink at work if you do you will be fired and we are not...

It’s time to grab an old-Fashioned and drink at work……(Please do not drink at work if you do you will be fired and we are not responsible our lawyers insisted that we put that in)
Yes this article of the Download Box will be discussing ….. Mad Men 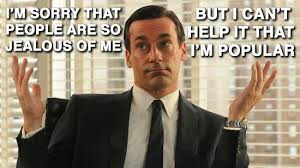 Let’s start this discussion with a confession, I did not get into Mad Men until half way of Season 3, yes I heard the hype surrounding the show. I heard the show had the best writing and acting around but really couldn’t get into a show about advertising with the 60’s. Eventually I decided to give the show a chance because it featured one of my favorite actors Jon Hamm and one of my favorite video game characters Cole Phelps-LA Noire (Aaron Staton). This show is one of the best written shows on television coupled with the acting of Jon Hamm. Elizabeth Moss and the cast there is no wonder why this show became the cultural phenomenon that it did.

Cultural Phenomenon
There are references to Mad Men all over Television, my favorite reference was in How I met Your Mother. This was when Marshall and Barney were drinking at work and said that they Were Mad Men”. Mad Man worked hard to stay historically accurate when its popularity increased it helped bring back the sixties style to the forefront. After Mad Men people became interested in sixties style suits, fedoras and tortoise shell frames, Women were trying to match Joan Campbell’s voluptuous curves. Joan Campbell gave women another body type to strive for where curves were celebrated. Mad Men was used by the president. During the state of the union the President used Mad Men to bring a conversation about gender equality to the Nation. The show also led the television industry to move away from the sitcom standard season of 22-24 episodes to Seasons of 13 episodes. Mad Men’s shorter seasons led to a greater quality of storytelling. Also I think the show had much to do with the explosion of people drinking scotch today.

The End
Well like all good things this show must come to an end, after 7 seasons and 92 Episodes it feels like the story that was set to be told will be finished. April 5 the final episodes of the series will be released. In general series finales often leave the viewers angry and frustrated ( ie Dexter, Sopranos, How I Met Your Mother, Lost), I feel as talented as Matthew Weiner has been writing this show there will be some of the Mad Men fan base that will be disappointed in how Mad Men ends. SPOILERS- I hope that the series delves more into the life of Dick Whitman and the struggle that Don Draper had keeping up his identity. Also with several characters I hope we as the viewers get closure to the story lines. Don Draper is a tortured man can he have a happy ending, and if he does will the fan base be happy with that. I am especially interested in seeing where Roger Sterling, Joan Holloway and Peggy end up and how Matthew Weiner wraps up his characters. I know many have been speculating how the show will end but we should trust Matthew Weiner’s vision for the characters as this is his story and he will end it how he chooses. 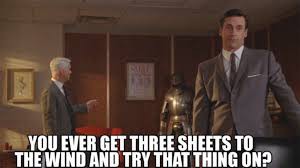 In honor of Mad Men I am having an old-fashioned right now.
Ash

Why its not too late to start watching Game of Thrones

All Women are Beautiful-An Interview with Missy Suicide