I’ve been attending comic book conventions for a couple of years, and while they all share some things in common, they also all have a unique feeling to them....
by Jake Hill April 26, 2017

I’ve been attending comic book conventions for a couple of years, and while they all share some things in common, they also all have a unique feeling to them. I just returned from the Chicago Comics and Entertainment Expo (C2E2), and after everything I saw and did, I’m happy to report that it may be one of the best comic cons in the country.

The big downside of the big comic cons is that they’re crowded. Most comic fans aren’t big fans of crowds, but try and brave them anyway, which leads to an often smelly, sometimes disease-filled experience. A lot of cons don’t have a good balance of comics and non-comics guests, often skewing heavily towards movies and TV. The smaller conventions are less crowded, but don’t bring in as many big-name guests.

C2E2 is the happy medium. New York Comic Con beat San Diego in 2015 with 167,000 guests and has continued to grow. Numbers for C2E2 were in the 70,000 range, and in a much larger space. C2E2 stands above other conventions with its easy to navigate layout. The convention floor is in one enormous room, along with Artist Alley, the Block, and the paid autograph lines. There are a few places to eat, but the food court on the main floor is filled with tables, and I never had problems finding an open seat. (The food is still overpriced though, as it is at every convention). The popular parts of the convention had double-wide lanes, allowing everyone to navigate without causing traffic jams every time someone wanted to take a picture.
Getting from the show floor to panels was also a snap. Security lines moved quickly and the space between the main floor and the panels (which were all upstairs in McCormick Place) was kept relatively clear. If you’ve been to a big, crowded con, you know how big a deal this is. 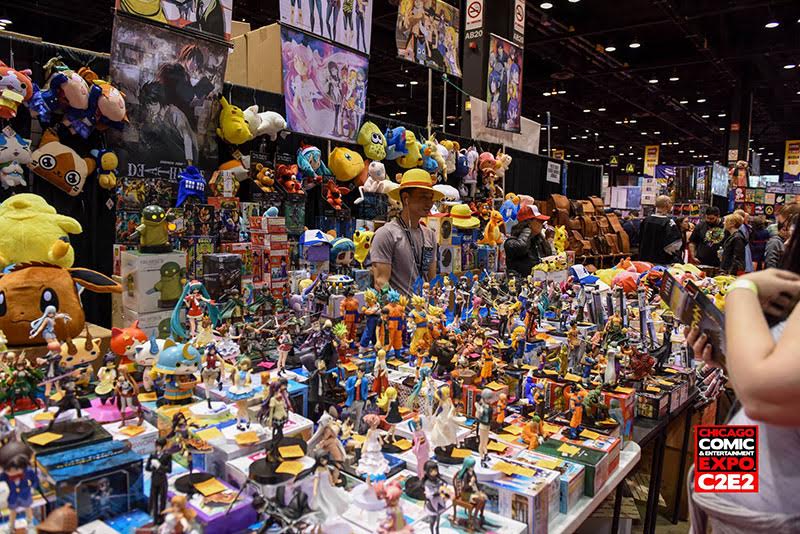 As for convention guests, I prefer to stick with comics creators and had no problems getting into my panels. I attended a lovely panel with Star Wars novelist Timothy Zahn, who told stories about his years working with Lucasfilm and then Disney. He graciously answered fan questions, and even managed to turn some dubious asks into insightful stories.
Later that same day, I went to one of those corporate Marvel panels where they announce upcoming books. After a series of PR snafus, the panel was carefully moderated, and let the creators do most of the talking, including some of my favorites like Chip Zdarksy (“Howard the Duck,” “Star-Lord”), Brian Stelfreeze (“Black Panther”), and Jason Aaron (“Mighty Thor,” “Wolverine and the X-Men”).

I later attended a panel focusing on “Southern Bastards” by Jason Aaron and Jason Latour. The Jasons ended up discussing a few of their different projects, including the upcoming “Scalped” TV pilot, and answering questions about delicious, fattening, Southern foods. The panel got uncharacteristically emotional when Jason Latour opened up about the recent passing of his father and how that’s impacted his work. “This guy’s my brother,” Jason Aaron said, and the audience was filled with burly Southerners trying not to cry.
My final panel was with the creators of one of my favorite comics, “The Wicked and the Divine.” Writer and artist Kieron Gillen and Jamie McKelvie are Brits, but both of them made it out to Chicago, along with the book’s editor (and Kieron’s wife) Chrissy Williams. There was hardly an empty seat in the room, but the panel still felt personal, with the creators and the fans ribbing each other and having a fun discussion about music, comic books and death. “WicDiv” fans are some of the smartest and most compassionate comic fans I’ve ever met, and the whole panel felt like a family reunion.
There was more going on than just panels at C2E2. All the major comics publishers had booths, but so did organizations like CBLDF, the ALA, and the Friends of Scales, a reptile rescue group based in Chicago. All of them had fun merch and if you ever got bored, you could see a reptile attendant patiently explaining snakes to a young Kylo Ren cosplayer. There were all the usual merchandise booths like the big tower of t-shirts, the vintage toy stands, and the steampunk themed clothing, and even my favorite, CritSuccess, who sell cool spinning rings for all your gaming wants and needs.
Gaming was as a whole was well represented, with a few board game stands, but one corner of the con was devoted to letting people try new games out. A few tables were roped off and an attendant helped teach new games for free. This was done separately from the booths actually selling the games, but I can confirm that sales were helped by this excellent addition to the con. I saw a lot of kids who were tired of walking puzzling their way through a few games. Just next door was a gigantic area full of TVs and vintage video game consoles, for no reason except that it was cool.

Artist Alley is my favorite part of any con, and the creators were very accessible. The few lines moved fast, but most artists were easy to approach and easy to talk to. I got to chat with Charles Soule and Ryan Brown about their current collaboration. I ended up walking away with art from the insanely talented Becca Farrow, and spending some time with Dave Baker and Nicole Goux, two artists out of L.A. with strong opinions about how awful Stan Lee was, art, Alan Moore, and interstate trains. I ended up picking up their descriptively titled book “Shitty Watchmen,” and even convincing Kieron Gillen to purchase a copy.
I don’t know how fast C2E2 is going to grow, but right now, it is the perfect con size. I emerged without contracting a flu, chatted with some of my favorite creators, learned about cool new art, and made some new friends. At the end of each day, I would collapse by the beautiful fountains in the atrium and watch the cosplayers trickle out. As I left the convention for the last time, a man dressed as Mr. Terrific soulfully played “Careless Whisper” on the saxophone. I don’t know what motivated that guy, but he represented all the weirdness and wonderfulness of Chicago Comic Con.