Bitch Planet-Triple Feature #1-A Review In this triple feature fans of the popular comic series are treated to a series of vignettes set in the greater Bitch Planet universe,...
by James O'Donnell June 13, 2017 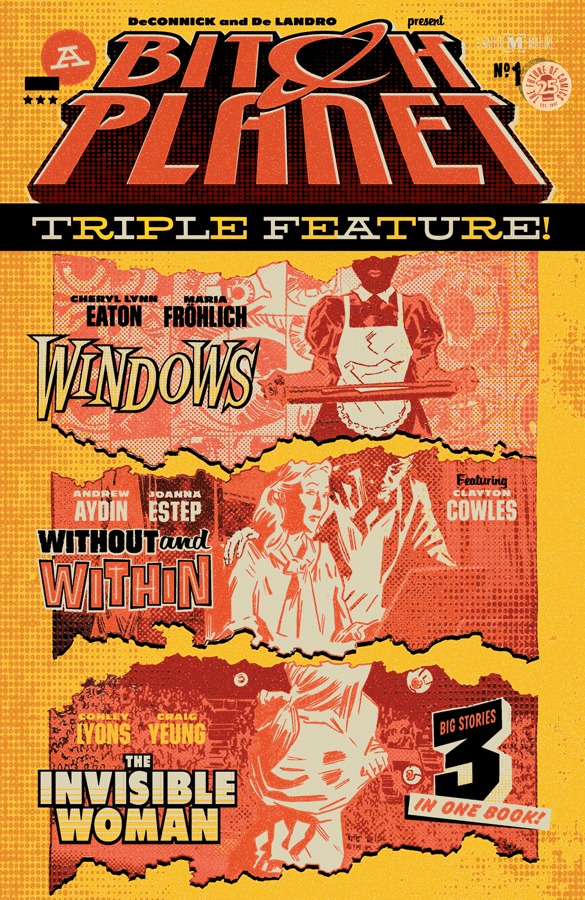 In this triple feature fans of the popular comic series are treated to a series of vignettes set in the greater Bitch Planet universe, created by Kelly Sue DeConnick and Valentine De Landro. For those unfamiliar with the setting for this series, I feel it best summed up by the writers themselves:

“In a future not so far away, troublesome and offensive women are jettisoned to the off-world penitentiary commonly referred to as BITCH PLANET.” 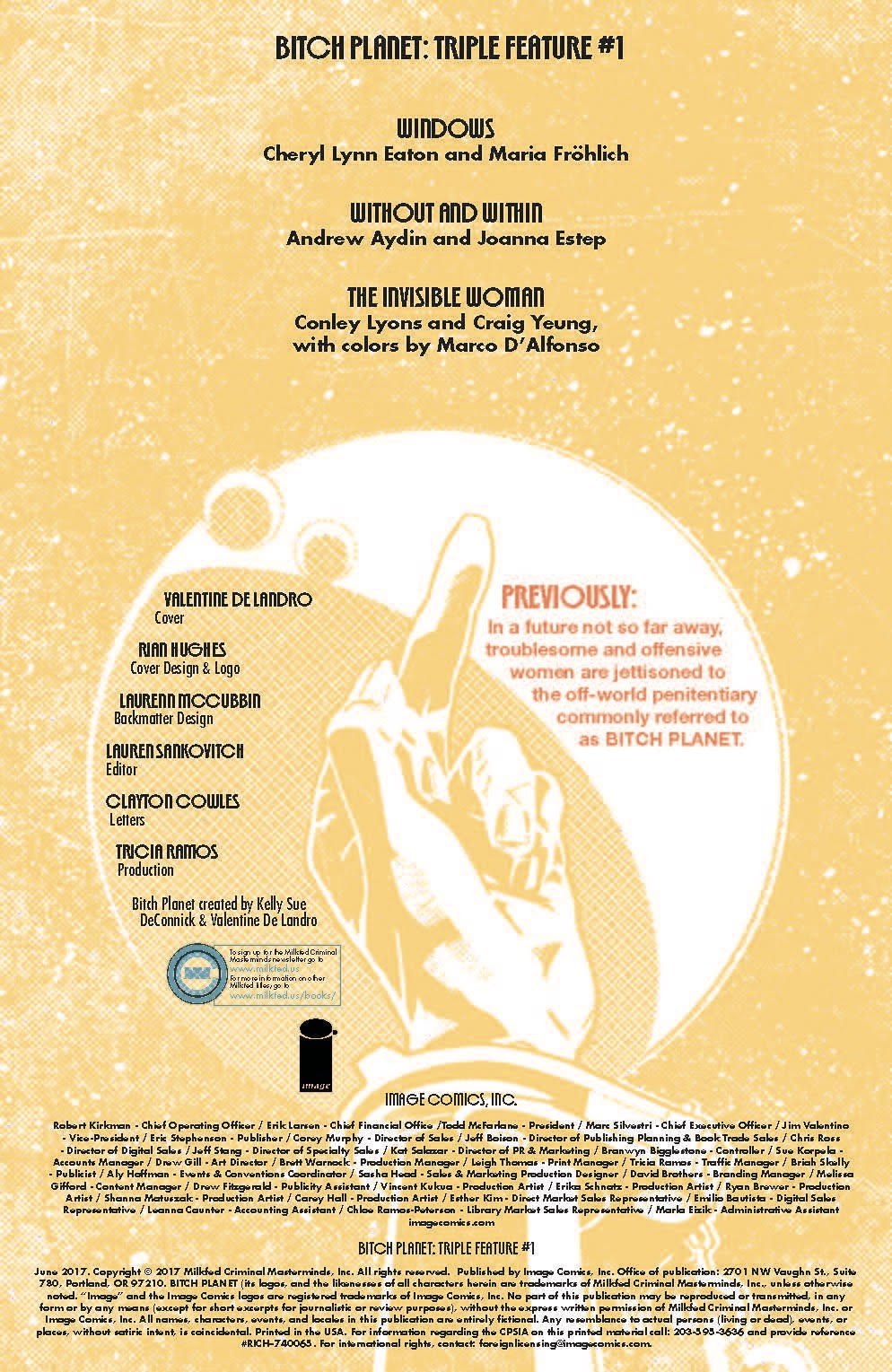 The first story revolves around Lupe, a hardened and well-educated soldier and former medic on Bitch Planet who is transitioning into a new career. We see her forced into a role far beneath her status, which results in an explosively fun finish. 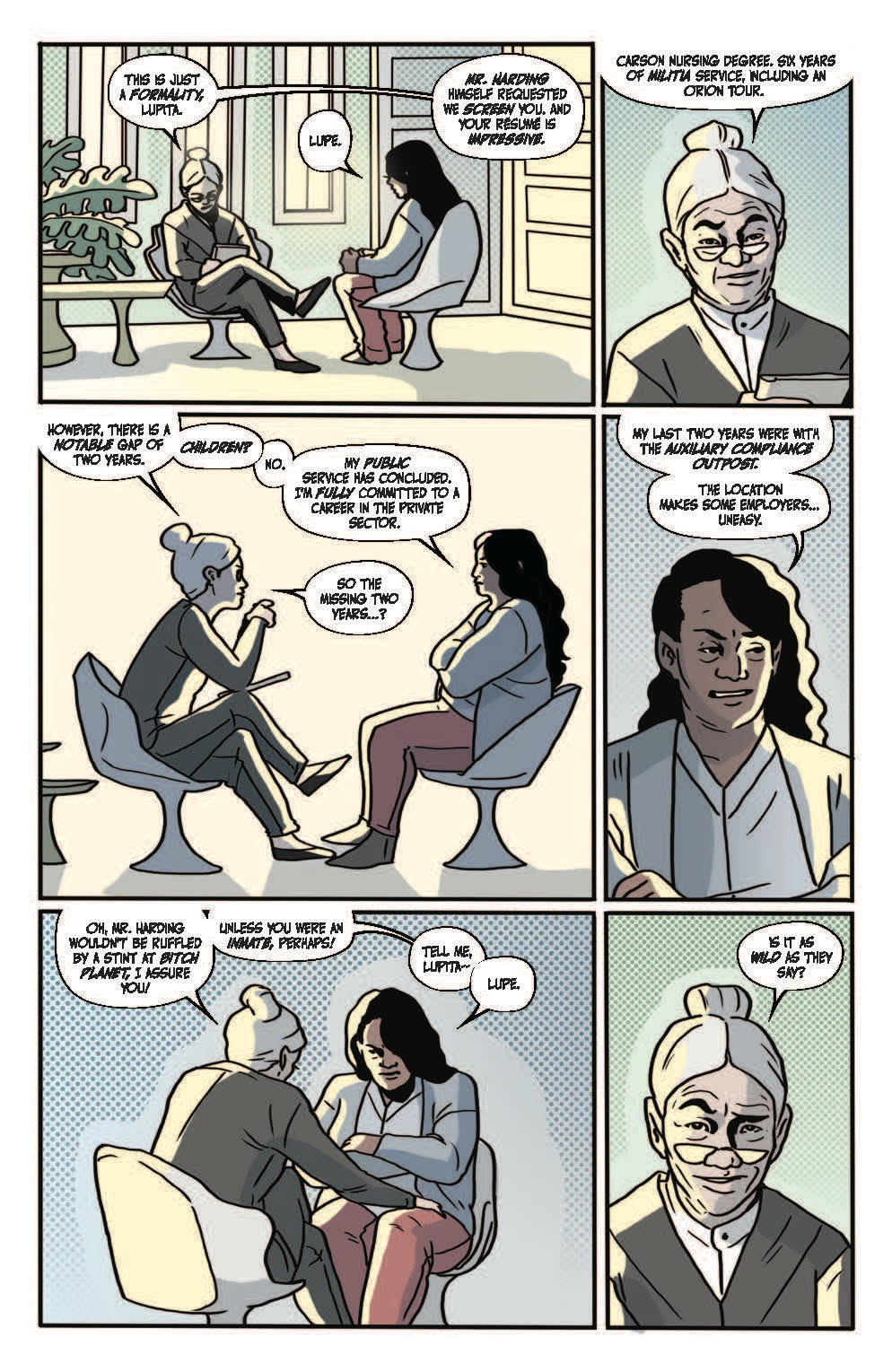 Segment two shows us the shadowy world of the patriarchal dystopian government- in which women are forced to the sidelines while backslapping idiot man-children give babbling nonsensical speeches to thunderous applause. So yanno pretty much exactly like the government now. This story did the best to create a real sense of tension as a young staffer falls prey to the wandering eye of a predatory politician. 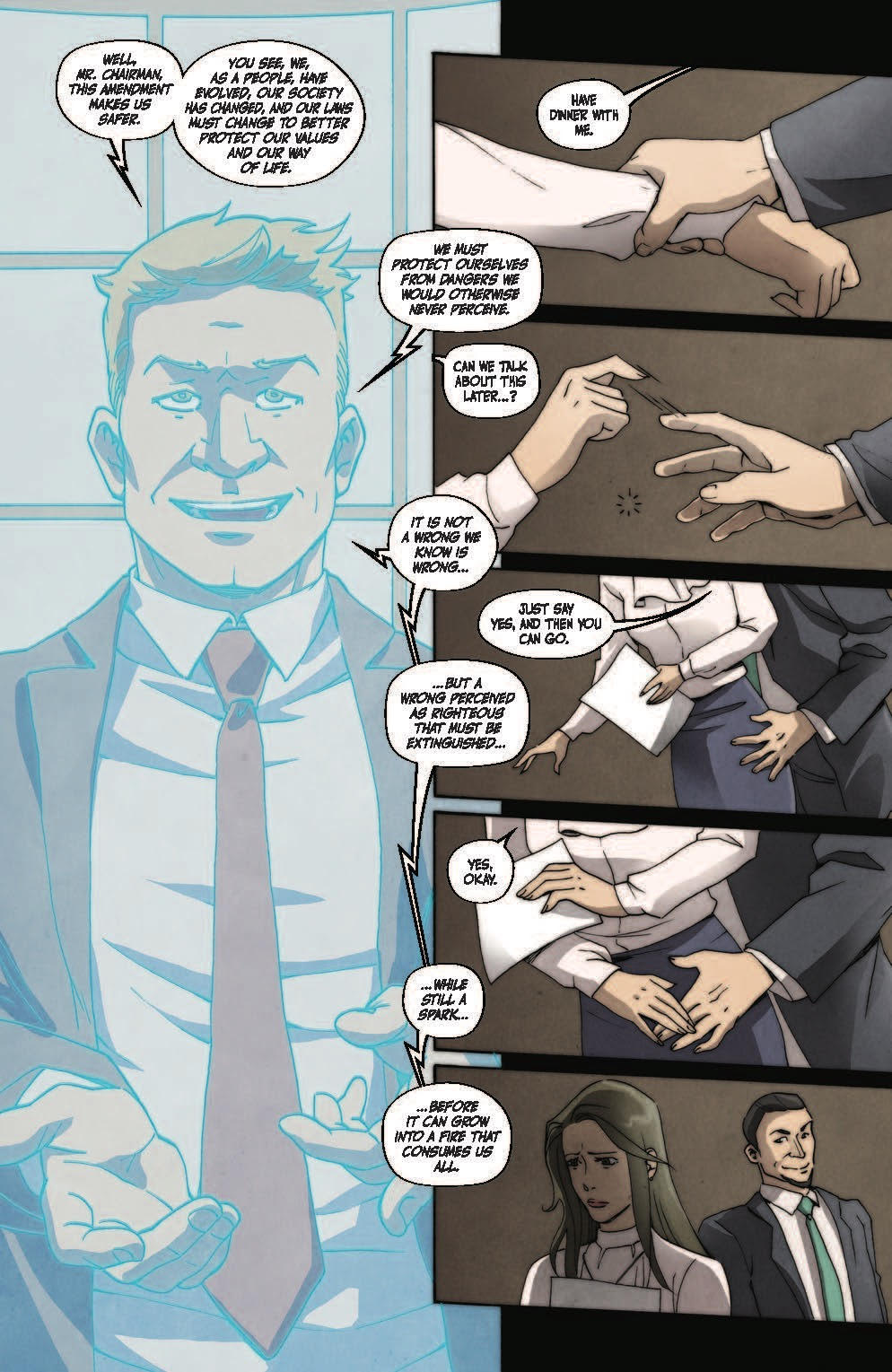 Finally, rounding out the trio is what I felt to be the strongest story in the bunch is the story of the Invisible Woman- a chilling story of workplace empowerment in which an ambitious office worker’s push for a better job results in an ending that is sure to put a smile on the reader’s face. 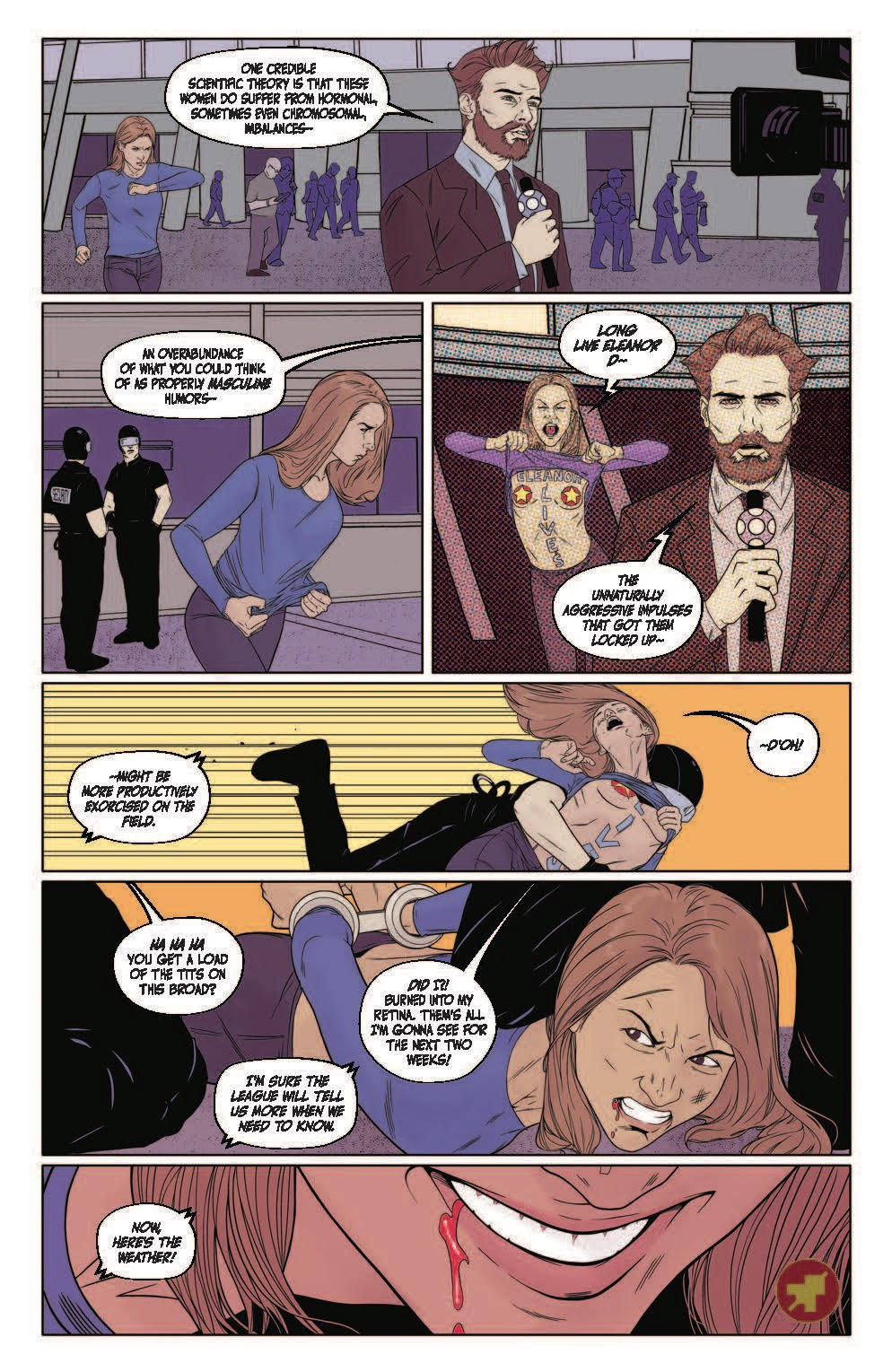 All three stories in this book fit nicely into the larger narrative of this series. The themes of misogyny and authoritarian pseudo-fascism centered on strong female protagonists mixed with a smattering of plausible sci-fi tech makes for a relatable and interesting read.

I get the feeling fans of the show Black Mirror (so pretty much everyone) will take real enjoyment from these stories that see relatable people forced to confront overwhelmingly dire elements of future society.

The art in all three stories is fantastic, each having it’s own style and tone that matched well to their respective stories. If I had to pick a favorite I’d say that Joanna Estep’s work in Without and Within was my favorite of the bunch, with a pseudo surreal feel (politics, amiright?) that remains grounded enough to convey the aforementioned tension in its story.

Overall I would recommend this book to fans of the series and newcomers alike, with accessible stories that are sure to bring joy to Sci-Fi fans everywhere. 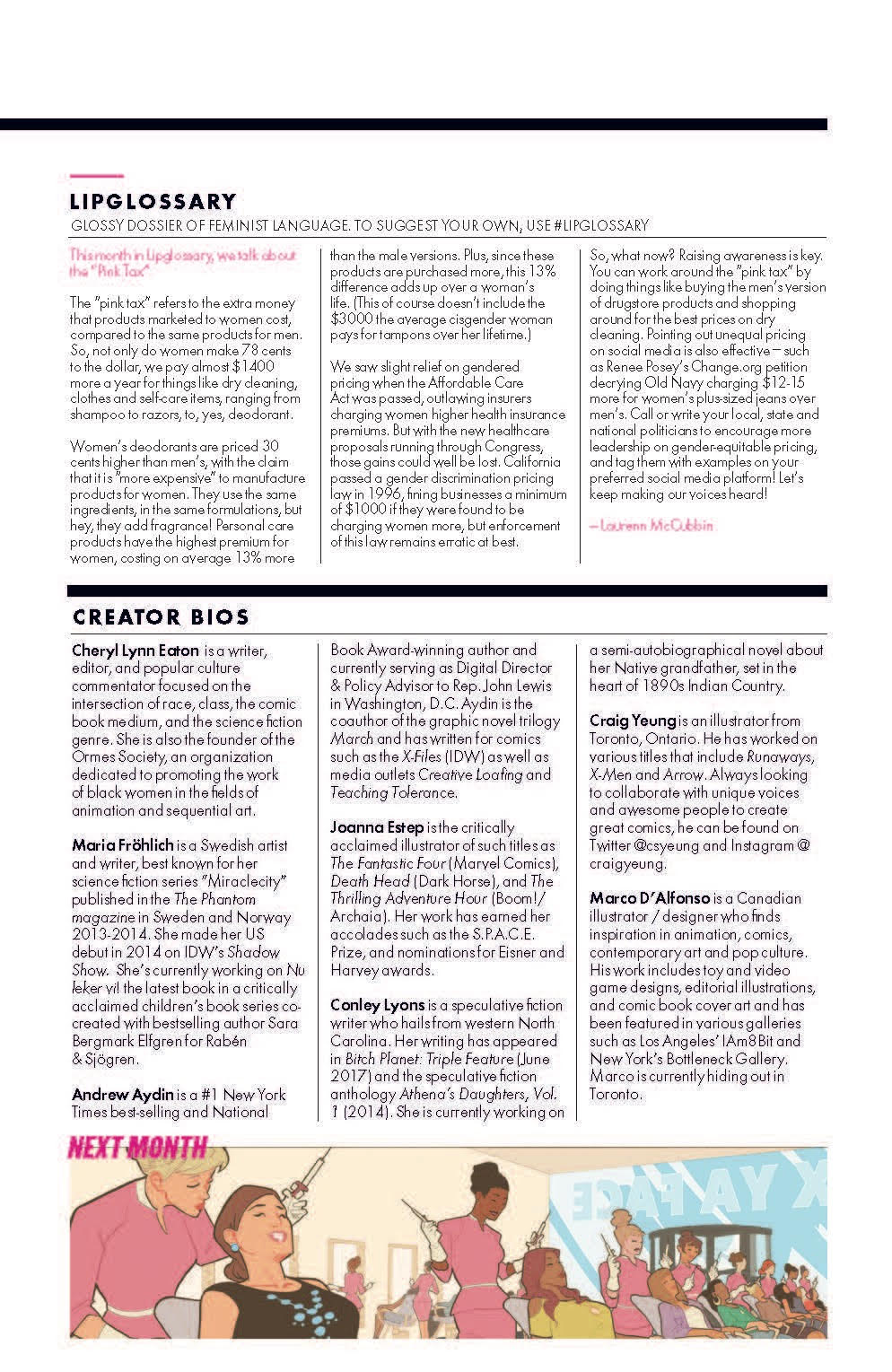