In the past couple years, Krampus has risen substantially in Western culture. We’ve seen more than one movie featuring the beast – though not all are good. Last year,...

In the past couple years, Krampus has risen substantially in Western culture. We’ve seen more than one movie featuring the beast – though not all are good. Last year, Michael Dougherty released Krampus (read my glowing review here), causing Americans celebrating Christmas to go absolutely crazy over the beast. But that’s not the only Christmas monster of European folklore. In fact, he’s not even the scariest. There are ones much more sinister than him who have been haunting the children of Europe for years. Being the good, not-sick-in-the-head-at-all holiday lover that I am, I’m ready to introduce you to some more grotesque beasts – and some weird little trouble makers.

First, we have FRAU PERCHTA – a sadistic holiday witch who seriously, seriously punishes the naughty during this supposedly joyful season.

In Austria and Germany, it is said that this witch will punish sinful children by slitting their bellies and taking their internal organs out, replacing them with straw and sometimes pebbles.

There is more than one description for the witch. Some depict her as beautiful conjurer; others tell of an old hag with a wrinkled, contorted face. Older lore adds the detail that she has one goosefoot. This was meant to symbolize her ability to shapeshift into an animal. All in all, she seems incredibly pleasant. What child doesn’t dream of having their bellies slit open during the night by a terrifying goose witch?

But Frau Perchta is more or less small German potatoes compared to GRÝLA, an Icelandic Giantess. The giant travels from the mountains in search of misbehaved children, and once she finds them, they are quickly devoured. This painting, created as recently as 2009 by Þrándur Þórarinsson, has helped to garner international popularity.
However, she’s not exactly a modern mythical creation.

The monster has been around

for hundreds of years, but it was not until the 17th Century that she was linked with Christmas. As legends often change shape and evolve, Grýla is no exception to this.

Grýla has had three husbands; two of which she killed due to boredom. Haunting the Holidays for the Grýla’s has become a family affair, as thirteen of her children are said to be the YULE LADS, thirteen mischievous dwarves who visit children during the season, each one of them staying for a duration of two weeks. Much less malevolent than their mother, the Yule Lads simply give gifts to well-behaved children and rotten potatoes for the naughty ones. Refer to this chart, courtesy of YuleLads.com, for their individual descriptions. 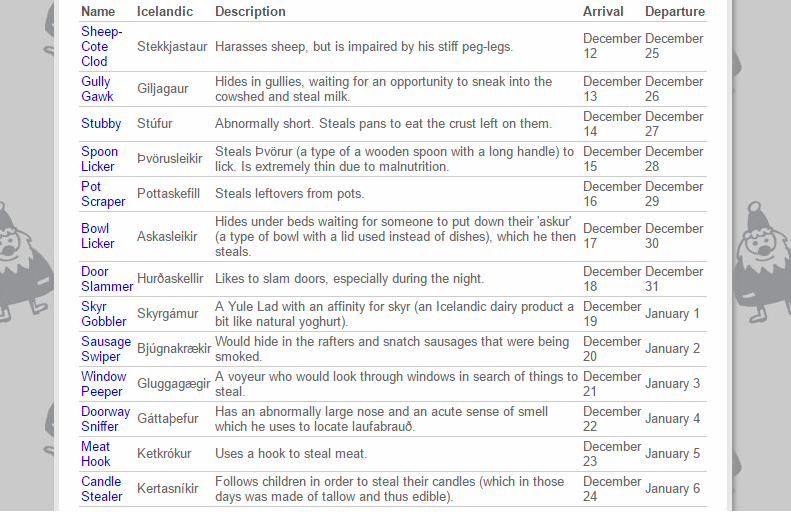 My personal favorite would have to be “Sausage Swiper”, because, come on, that’s just f*cking hilarious. Sorry. You know it’s true.

Grýla joined the legend of the Yule Lads in later on to become their mother, for reasons unknown. There have been many more of these quirky Yule Lads throughout history, but as time went on, many were forgotten. Some of them had great names as well, such as Flotgleypir – Fat Gobbler, and Smjðrhákur – Butter Greedy. Now, this is just pure speculation, but in my opinion, Fat Gobbler and Butter Greedy have thinned out of the group around the time that their favorite chef Paula Deen started to come under fire over a few choice words of hers. But as I said, this is just my personal conjecture; I’m not even sure if Grýla allows her children to watch cable.

The family also has one giant, judgmental and materialistic cat named Jólakötturinn, The YULETIDE CAT.

Jólakötturinn is said to come down from the mountains in Iceland on Christmas Eve and eat anyone who was not wearing new clothes. How rude. It was thought that farmers who worked harder would wear out their clothes faster, and so the acquisition of new clothing meant that they had worked hard enough to earn it. Those who didn’t care to update their wardrobe would be devoured. As scary (or silly) as these Christmas traditions may be, none are currently able to usurp Krampus’ new throne in American popularity. Who knows – maybe one day we’ll see a Grýla film, and the holidays will truly be ruined forever.

If you’d like to read more on Krampus, you can do so here.

Happy Holidays from the Geeked Gods!

The Elder Scrolls V: Skyrim Special Edition – Should You Buy? (Xbox One)

The This Ain’t Right Movie Podcast-Harold and Kumar Christmas