Best Marvel Villains You May Not Have Heard Of   By Jake Hill Thanks to popular films and TV shows, obscure Marvel characters are more popular than ever. Unfortunately,...
by Jake Hill September 6, 2017 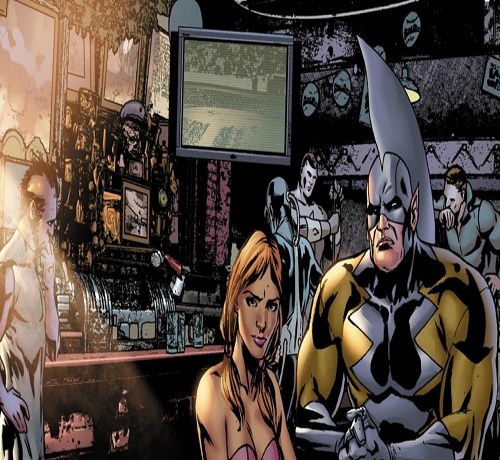 Thanks to popular films and TV shows, obscure Marvel characters are more popular than ever. Unfortunately, there’s one department the Marvel adaptations have really been lacking, and that’s the villains. The Marvel Universe has some of the weirdest and most wonderful villains ever imagined. Here is a collection of some of the best Marvel villains you may not have heard of. 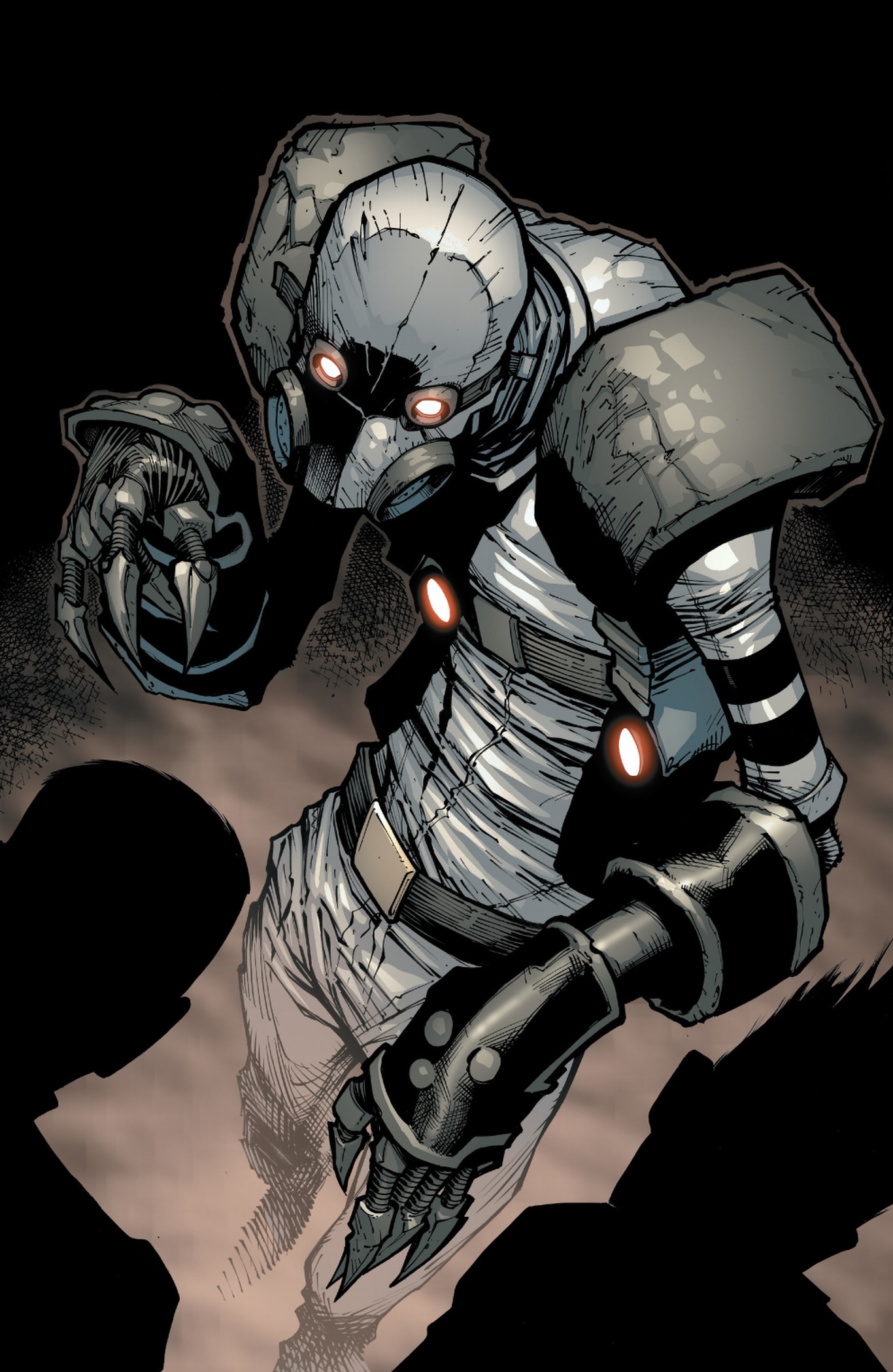 Ghost (who’s real name is unknown) is an Iron Man villain with all the powers of a ghost. He can turn invisible, fly, and phase through walls. Those things in and of themselves are a pretty iconic shtick, but the best villains are the ones with the best motivations, who don’t see themselves as villains. Ghost is as much an idealist as Magneto. He wants to bring down corporations and capitalism. Considering how many other Marvel characters are wealthy inventors and industrialists, this points him at odds with a ton of heroes. Unlike other villains though, Ghost is in a unique position to show us a darker side of our heroes, by being a villain with a tragic origin, and a relatable motivation. 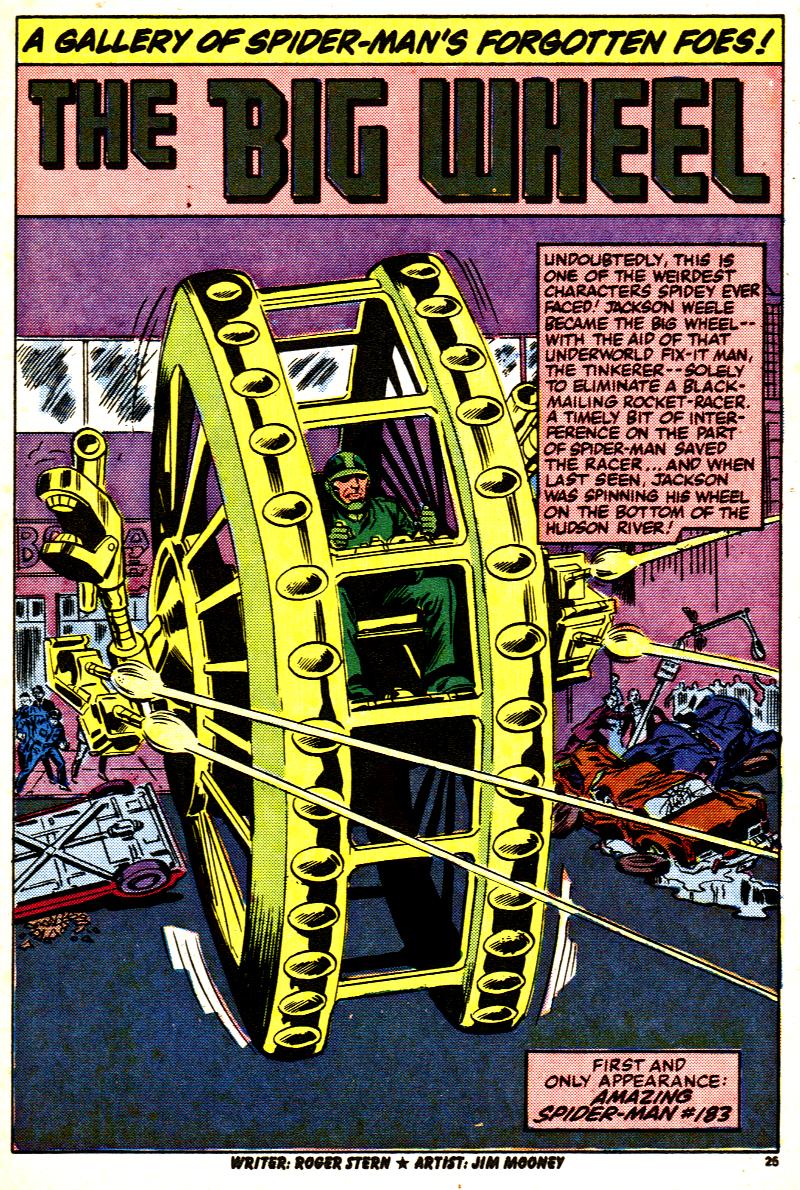 Some villains function on the preposterousness of their villainous purview. Jackson Weele was a mechanic and industrialist who started down a dark path and created a terrible weapon. When he entered into a rivalry with jet-powered skateboarder Rocket Racer, he needed a vehicle that could match the Racer, so he hired the Terrible Tinkerer to create a Big Wheel. Literally just a giant single wheel covered in weapons and robot appendages. Look, maybe that’s not the most practical weapon, but this isn’t a list of the most practical villains. Big Wheel presents a unique challenge to heroes in sheer nutty destructive power that they must put a stop to. 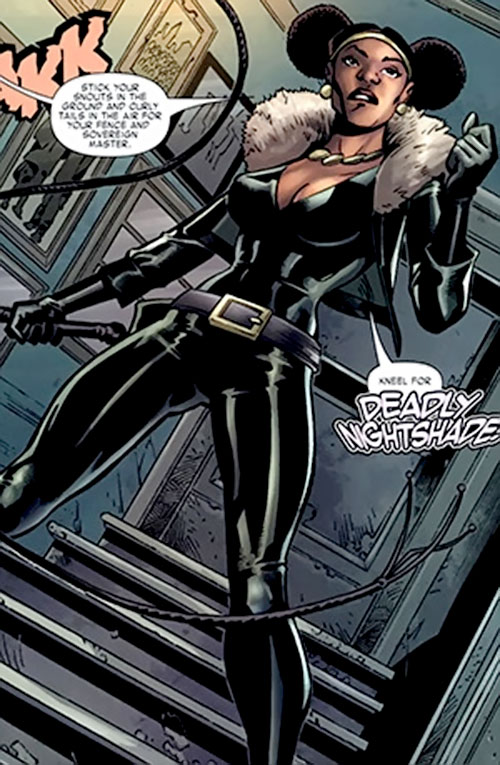 Speaking of impractical schemes, Deadly Nightshade is a villain with the single craziest plan a villain has ever had. She’s responsible for turning Captain America into a lycanthropic Cap-Wolf. Did it work? I don’t know what you mean; she didn’t take over the world or anything but she succeeded in turning the world’s greatest hero into a bloodthirsty wolf-man. Sometimes that’s enough. Unlike other silly supervillains, Nightshade has since leveled up. She was one of the few villains to come out on top of MODOK’s desperate heist scheme, and she’s even teamed up with Hawkeye to fight for the rights of the downtrodden. She’s a rare female comic book supergenius, a rare comic book supergenius-of-color, full of hidden depths, and she turns her enemies into freaking werewolves. 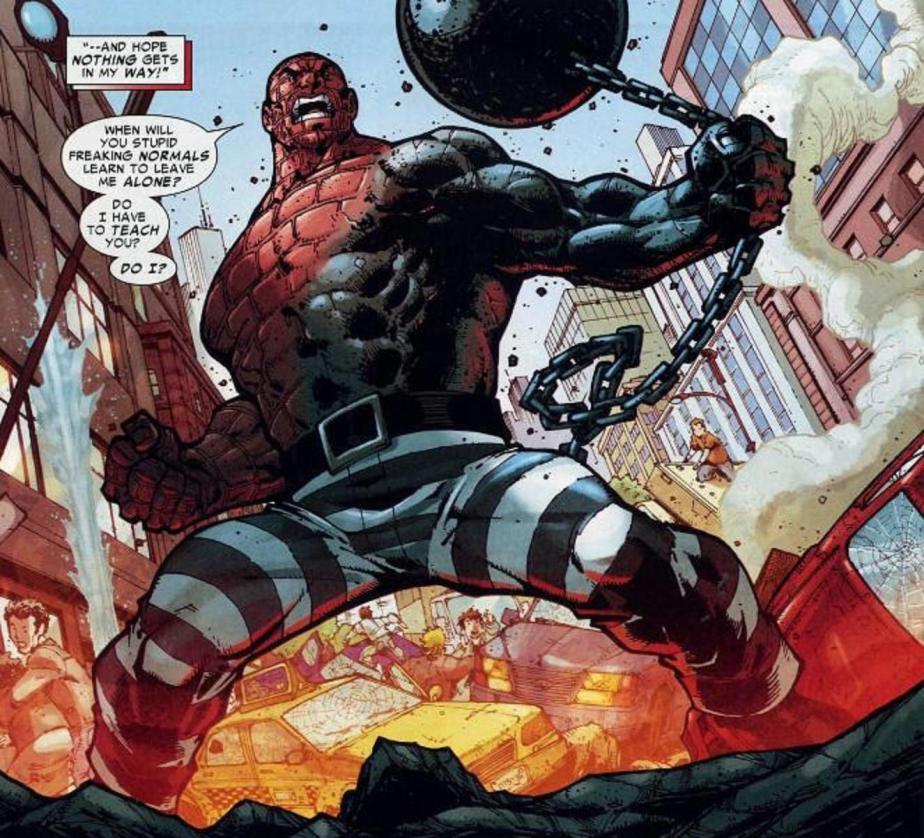 Crusher Creel is not a complete unknown, but his full potential often goes unrealized. He’s a former boxer and wrestler, who can, along with his trusty wrecking ball, turn into any material he can touch. It’s one of those amazing Silver Age powers only limited by the writer’s imagination. Sure he can turn into steel, or concrete, or glass, but in the hands of a creative mind, he can do so much more. What if he touches Thor’s hammer and becomes the Godly metal Uru? Or if Wolverine stabs him; will he become indestructible adamantium? There’s always that time She Hulk tricked him into becoming Legos and smashed him into a million tiny bricks. Absorbing Man is a solid antagonist, a career criminal with a fascinatingly weird superpower. 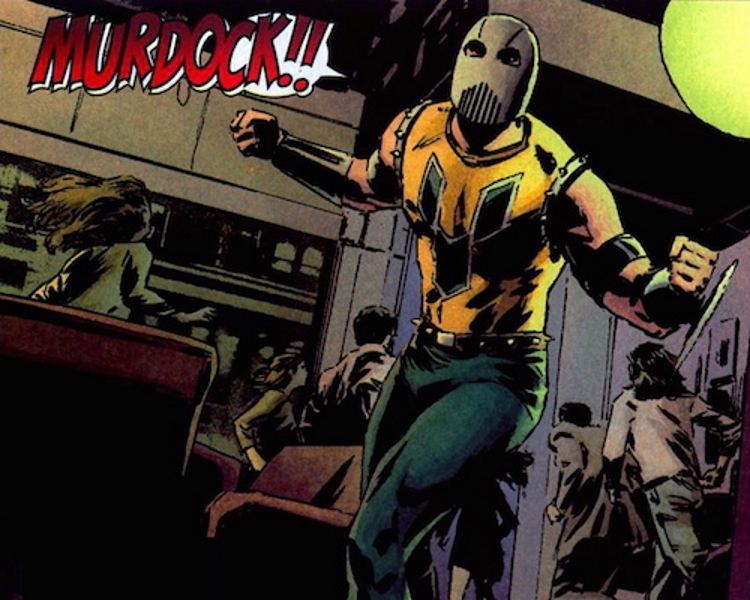 Melvin Potter has appeared on Netlix’s Daredevil, but he’s not yet adopted his villainous persona, the buzzsaw hurling Gladiator. Unlike a lot of comic book villains, Melvin is as nice as they come. He just has an ill-defined mental disorder that makes him confused, and before you know it he thinks he’s battling in the Roman Coliseum. Crazy villains aren’t that unique, though Melvin is uncommonly sweet, but it’s his day job that makes him distinct. Melvin is a tailor, and is the source of many costumes for heroes and villains alike. If you want robot suits you go to the Tinkerer. If you want high-end fashion you call up Janet Van Dyne. Gladiator is the kind of villain who makes the entire economy of underground supervillainy possible. 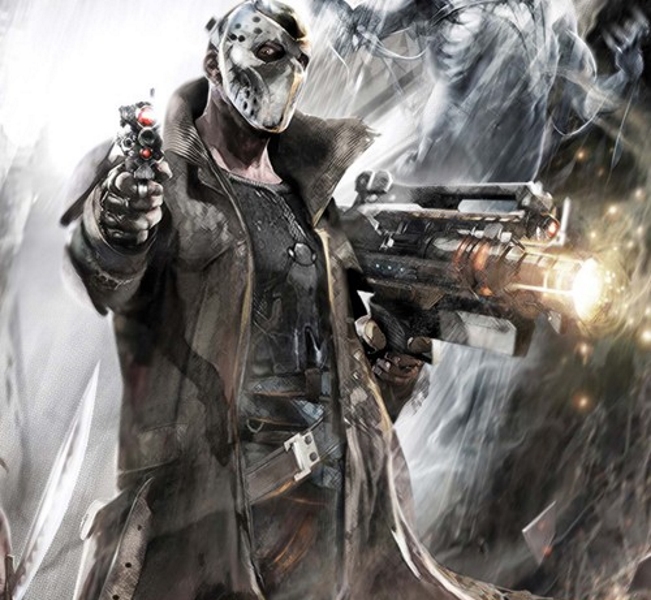 No, not Thor villain Skurge the Executioner, we’re talking about the Scourge of the Underworld. And who is Scourge? You can never be sure. It’s a villainous identity that’s been taken up by maybe a half-dozen characters over the years. The only things that stay consistent are the hockey mask, trench coat, and name. So why is Scourge great? Figuring out who he is this time is always half the fun. Whether he’s a hero working undercover, or a powerful villain pretending to be weaker than he is, or an anti-hero hiding in plain sight, whenever Scourge shows up, the story gets interesting. 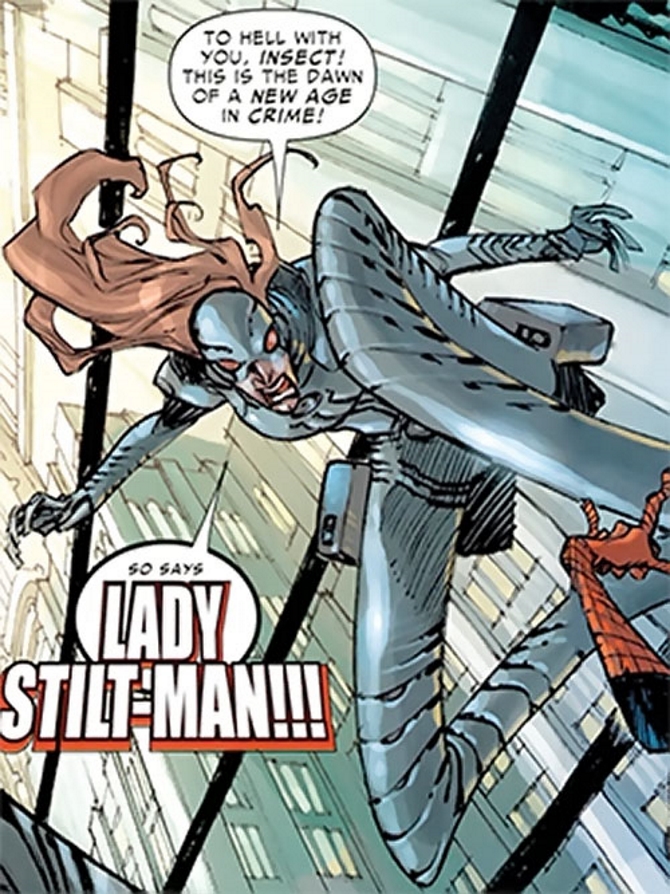 There are a lot of heroes who are picky about their name, not wanting to be called something-girl when they are in fact something-woman or whatever. Then there is Lady Stilt-Man who proudly DGAF. Lady Stilt-Man takes the already insane premise of Stilt-Man, a villain with super-strong hydraulic extending limbs, and twists it just enough to tell you what she’s all about. She stole his gimmick, she stole his name, she’s stealing your money, and she doesn’t care what anyone thinks about any of that. 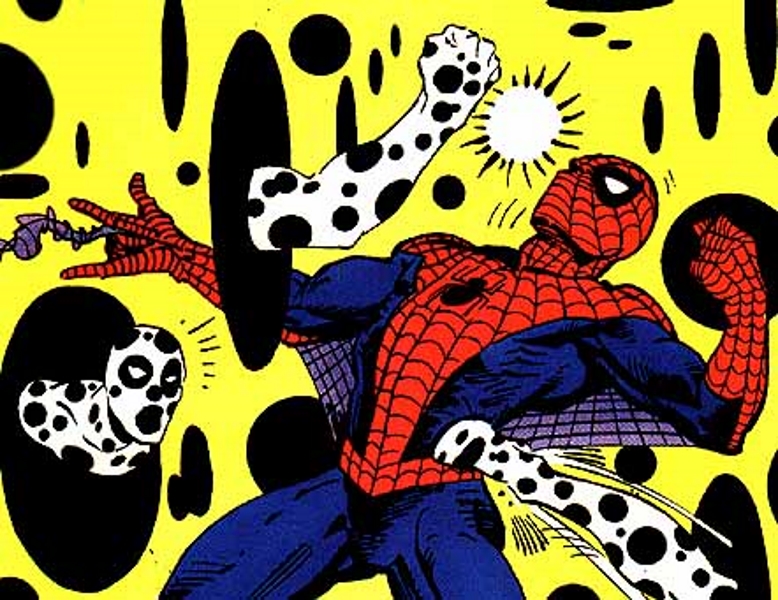 The Spot is one of the most visually interesting comic book villains ever created. He’s a white figure covered in black spots. He can hurl those spots through the air or affix them to surfaces, then reach through one spot to get to another. That means he can escape prison by throwing one of his spots through the bars, or have you punch yourself in the face by catching your fist in one spot, and having it emerge from another. Spot doesn’t have much motivation beyond stealing money and being bad, but his presence always makes a book visually interesting, and his powers are guaranteed to bring something unique to any villainous team-up. 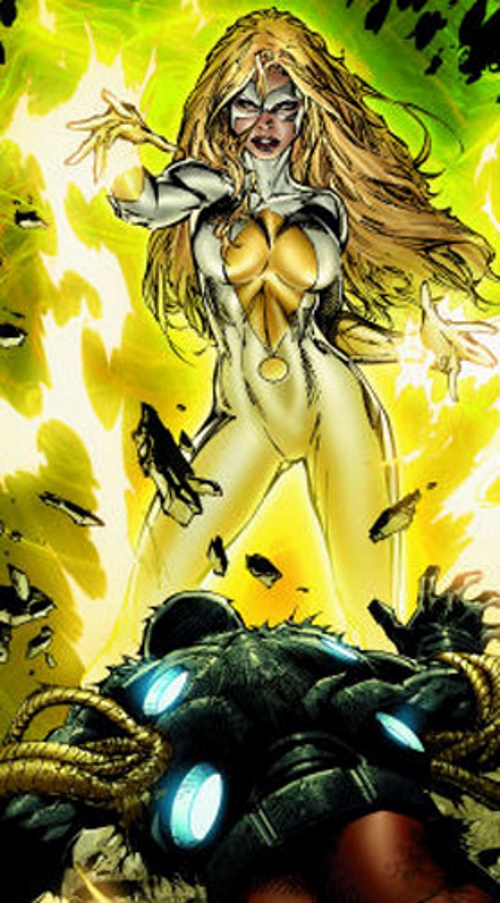 Doctor Karla Sofen’s fame has waxed and waned throughout her career, but she deserves to be one of the top villains in Marvel. She’s bonded to a Kree moonstone, allowing her to fly, absorb and blast energy, and perform feats of super strength. She can also become intangible. That’s a serious bag of tricks, making her a worthy foe for the likes of Captain Marvel. What makes her truly unique is her day job. Moonstone is an evil psychologist, making her not only a master manipulator, but also uniquely positioned to set up patsies to take the fall for her crimes. Her tenure with the Thunderbolts had her flirt with being a good guy just enough to make her interesting, but she never seems to be able to kick her evil ways. 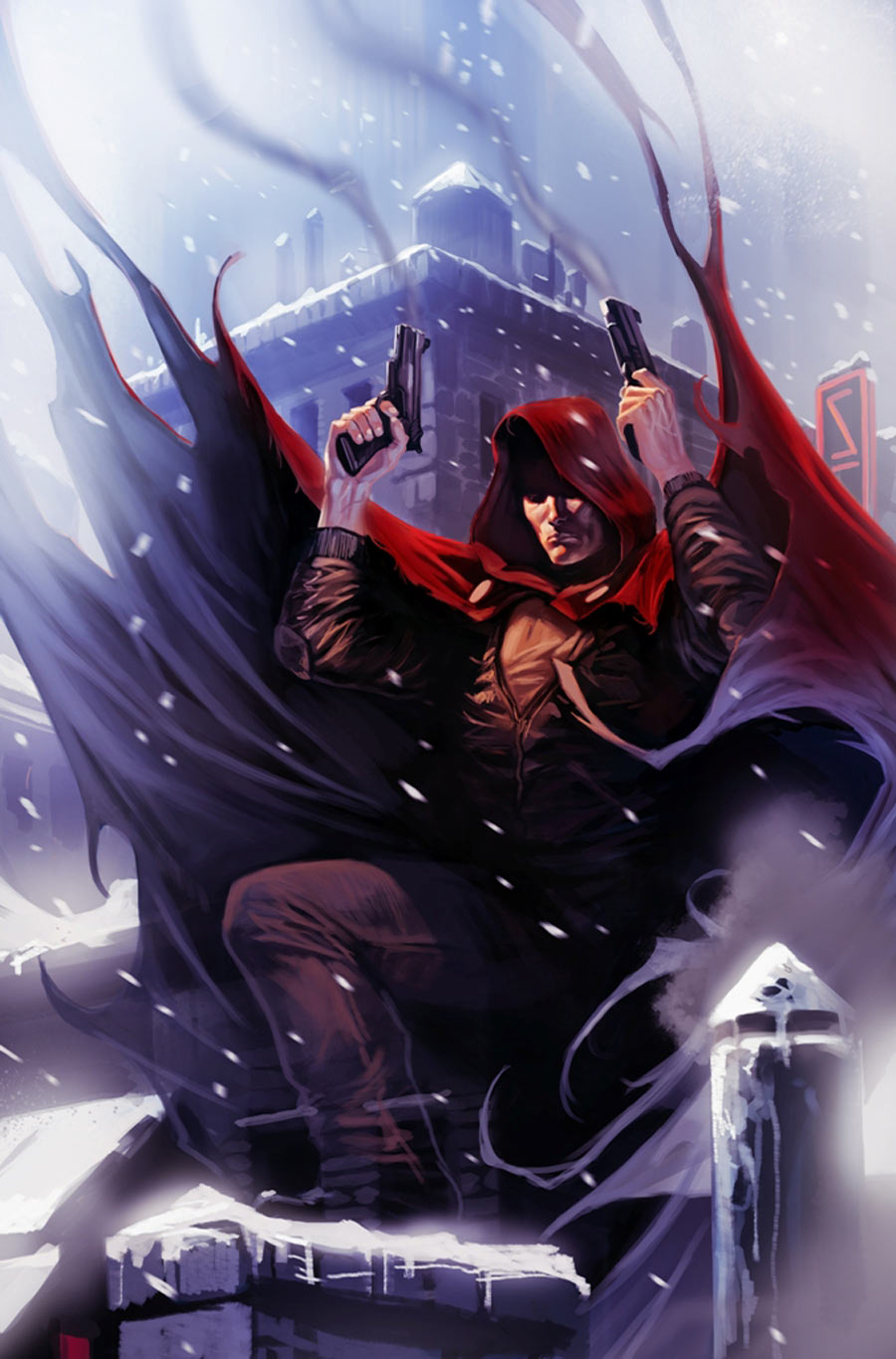 For a while there Parker Robbins was the next big thing, and no wonder, he was created by comics superstar Brian K. Vaughan. Robbins was a low-level thug, and big fan of colorful supervillainy when he stumbled across a demon in a warehouse. He looted the demon’s corpse and stole a pair of boots that let him walk on air, and a magical cloak that lets him turn invisible (but only while he’s holding his breath). Then he usurps Wilson Fisk and becomes the new Kingpin. Baller move! But then he loses all his powers and support. Bummer! That’s when we learn what Parker Robbins real power is: an indomitable will. Despite being a regular dude, the Hood is always looking for a magical power up. He made a deal with Loki for magic powers. He came to possess the Norn stones. He even assembled most of the Infinity Gauntlet by stealing the gems from the Avengers. The Hood will do anything for ultimate power, making him a far more interesting villain than he first appears. 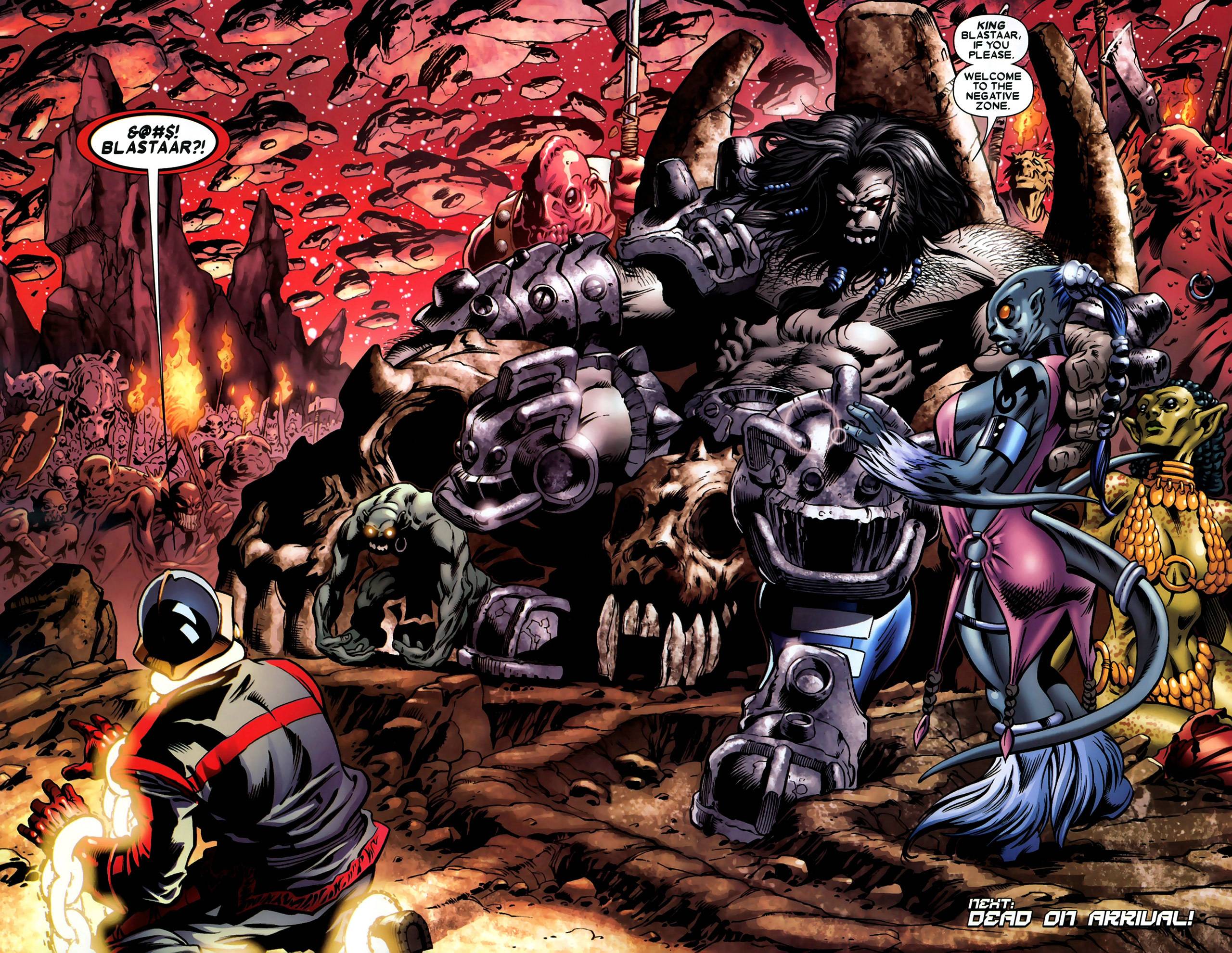 King Blastaar, if you please. This classic villain is a Stan Lee/Jack Kirby original. He’s a thuggish, gorilla-like alien from the Negative Zone with the power to blast explosive propulsion from his fists, like a walking bomb. His name, look, and silly powers are all pretty great, but it was in Abnett and Lanning’s now-classic run on Guardians of the Galaxy that Blastaar leveled up to the upper echelons of villainy. Taking advantage of an intergalactic treaty, Blastaar got himself declared the King of the Negative Zone (despite the fact the much scarier Annihilus is the de facto ruler) and thus took on a level of diplomatic immunity. Through multiple interplanetary and interdimensional conflicts, Blastaar slimed his way to the top, showing surprising cunning for a bruiser with bomb hands. 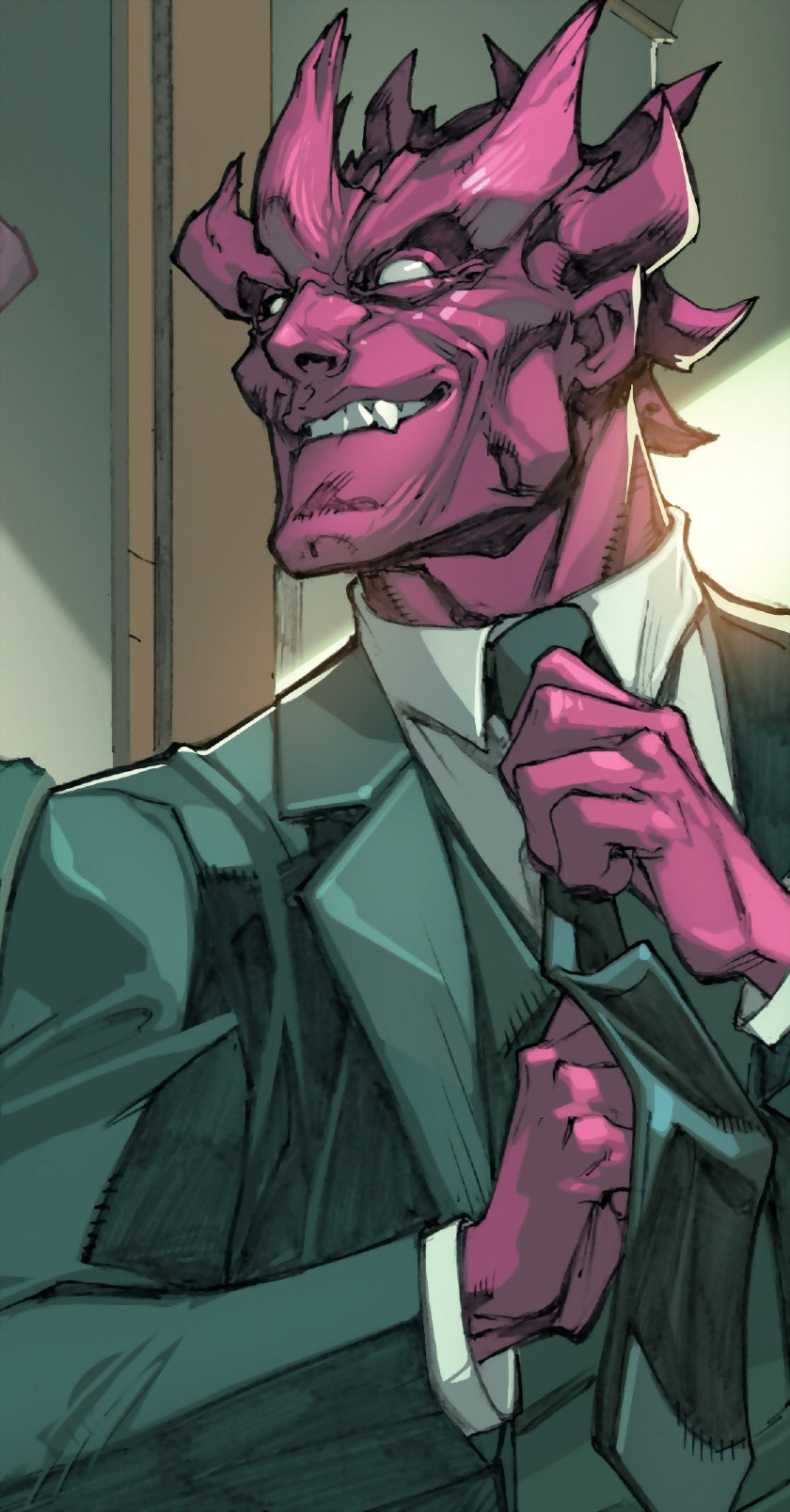 Gordon Nobili used to be a mafia boss, and not a great one at that. Then his Inhuman powers activated and he turned his hunger for street turf into a desire to gain royal power. As Lineage, he can communicate with anyone in his bloodline, who appear as gross faces on his body. This gives Lineage access to generations of information, and hidden Inhuman lore. That’s a tough power to work with, but Lineage has proven himself to be one of the most enduring foes of the modern Inhumans, finally fulfilling his desire for power with devious schemes.

Got a favorite on this list? Maybe you hate one of these evil guys? Is there a villainous entity that I tragically neglected to include? Please let us know in the comments below.