I recently did a post about Batman and his unique connection to The Shadow, a piece which you can read here. I loved both characters growing up. Batman, of...
by Former Writers May 2, 2017

I recently did a post about Batman and his unique connection to The Shadow, a piece which you can read here. I loved both characters growing up. Batman, of course, stemmed from countless summer afternoons watching the 1966 “Batman” series and Tim Burton’s 1989 adaptation of the character. I came to discover The Shadow from the 1994 adaptation of the same name, a movie which ten-year-old Chris loved almost as much as he did “Batman.”

“Batman/The Shadow” doesn’t draw necessarily draw anything from these superhero classics of old, but it does in many ways sate my inner child that misses these whimsical tales. In many respects, “Batman/The Shadow” play with the existing motifs of characters. The book opens in media res with Batman confronting his former mentor, Henri Ducard, about weapon found during the investigation into a murder. Batman is investing the murder of an Arkham Asylum orderly, Lamont Cranston, who inexplicably matches the facial recognition for The Shadow.

“Batman/The Shadow” sends Batman in search of answers when a man long thought dead is murdered.

It’s exciting to see these two characters together, playing off each other, and downright criminal that we don’t get to see it more often. The Shadow, who hasn’t been owned by DC Comics in some time, has more recently been somewhat of an unspoken piece of Batman lore, though directly tied into the character’s inception. Seeing the two in the same issue is a welcome treat and one that readers almost certainly aren’t going to be able to get enough of.

Orlando and Snyder are possibly having too much fun with this. The bulk of the issue is Batman hunting down the inexplicably still alive Shadow, scouring the city and following clues in his cover identity of “Matches Malone.” Seeing the world’s greatest detective being a detective is something sorely missing from the action filled epics of the current runs of “Batman” and “Detective Comics.” The mystery itself, of The Shadow’s long life and the mysterious murder weapon, is one that pulls the readers in immediately and holds their interest.

Seeing The Shadow back in action, and across from Batman, is a real treat for long

Scenes with The Shadow are, sadly, very few and far between in this first issue, as the bulk of the tale revolves around Batman hunting him down. But it’s great to see the character in comics again, and the art style here really suits it. Riley Rossmo brings a dramatic sense of style and energy to this issue, creating a spectacular visual style that draws the reader in. A blend of over-the-top cartoonish and classically styled designs, Rossmo’s art, and Plascencia’s colors are vibrant and gorgeous. 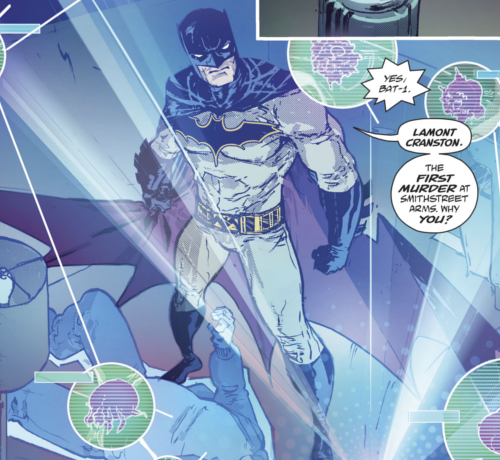 Story and art mesh brilliantly to create an exciting tale of mystery and intrigue.

The issue ends with a spectacular twist, one that catches the readers off guard and expertly plays with the traditional Batman lore that readers have known for years. “Batman/The Shadow” does an excellent job of catching up readers for the new adventures, but isn’t afraid to take a risk and make a nod to the old adventures, be it an old Batman tale or an old Shadow supporting character. This book is just as much for the new fans as it is the old ones, and readers should give this one a shot.