Batman: Earth One, Vol. 1 is Among the Best of Batman

Earth One is a whole different entity; it changes the tale of the Batman ever so slightly, creating something captivating and powerful without sacrificing the character's integrity.
by Paul Aloisio October 12, 2016

I’m so sick of origin stories for Batman. I know who the character is; we all do, at this point. How many times do I have to see Bruce Wayne react to the death of his parents? Don’t you think, after decades of this same story being retold, that it’s time we move on from the start of Batman? Can’t we skip it?

I’m glad no one listens to me – otherwise, Earth One may have never been written. I had all but sworn off Batman origin tales after Haunted Gotham – a story that took the core mechanics of the formation of Batman and threw them away; unfortunately, not for the better. I still held the belief that a good origin story could be told, but at this point, I had grown very tired of them. Earth One is a whole different entity; it changes the tale of the Batman ever so slightly, creating something both captivating and powerful without sacrificing the character’s integrity.

There are liberties taken here and there by writer Geoff Johns, but these liberties are what makes the book. There is a level of humanity to Bruce Wayne, even after he becomes Batman, that is often omitted from many tales of the caped crusader. Writers (understandably) tend to forget that Bruce Wayne is Batman after his mask and cape are on. Sure, there’s the visual difference – one is dressed in all black with pointed ears and white eyes, the other is a wealthy white dude – but it never seems anything more than skin deep. Earth One takes its time exploring this, never separating Bruce and Bats too far from each other.

There are many surprises and tragic events that the characters must go through in Earth One, and without spoiling anything, I will say this: these events do change them. The book may as well been titled Batman: An Exercise in Character Development. Most stories do indeed have events that main and supporting characters must endure; many also gloss over the end result of how the characters change after said event is over. It is excellent. It is real. And most of all, it feels fresh.

But I will get into the characters of Bruce and Alfred here, though. First of all, little Bruce Wayne is a spoiled brat. He is depicted as a privileged kid without much regard for others (hey, we were all filthy rich prepubescent boys once, right?). Normal kid stuff; but due to him being a normal bratty kid, he gets his parents killed. Oops. The fact that he blames himself and has a reason to back up his guilt makes for an especially tragic death in this episode of How to Kill Batman’s Mom and Dad.

Lil’ Bruce Wayne (not a rapper) is then forced upon Alfred, a veteran friend of his father who kicks some serious ass here. He’s much more than an old butler in Earth One; he may be the only butler in comic book history who poses a serious physical threat to the common criminal. He’s hard on Bruce Wayne, and actually encourages the use of guns. It’s completely strange, but once you read it, it’ll make complete sense. Trust me.

Bruce Wayne does not have an easy start as The Dark Knight. Yes, he wants vengeance, but he’s very clumsy. The introduction sees Batman’s grapple hook failing, making him look like a crazy man in a cape as opposed to a hero. He has much to learn, and he takes a physical and emotional being. This is something that I absolutely loved. It’s incredibly frustrating to read a newer origin tale in which Batman decides to be Batman and is capable of superhuman feats immediately. Life just does not work that way; not even for superheroes.

Something that’s often been discussed about Earth One is that you can see his eyes through the mask, which is significant and very telling of what Johns was trying to do. Like Batman getting more than a few bruises, his eyes reveal a human side of the hero that the mask is unable to hide. Bruce Wayne is Batman in this story. The two are one.

But all of this work in making a very human Batman could easily be undone by art that’s too extravagant. Artist Gary Frank compliments Johns’ story perfectly, giving all of the characters designs that are realistic while still retaining a good ol’ comic book quality. It’s not hyper realistic along the lines of Kingdom Come, but it’s damn good, nonetheless. Gotham is truly dirty and corrupted while still retaining a sense of believability. The environment is harsh and cruel without buildings that are unreasonably built and villains with contorted faces beyond the limits of nature.

I could ramble on for page after page about what makes Earth One so great, but it won’t do you any good. You’ve got to take my word on this. It’s something that every Batman fan should read.

One of the most entertaining Batman stories ever written. 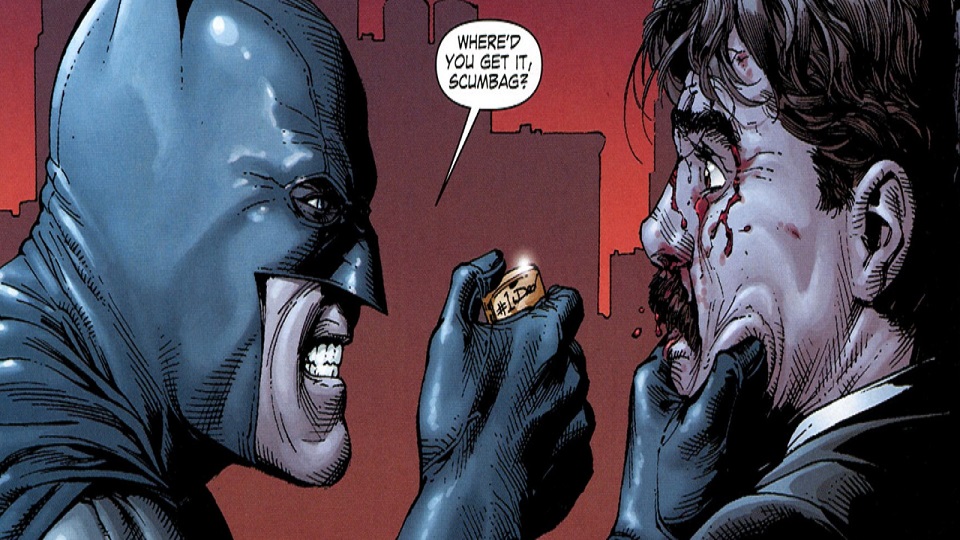