Atomic Blonde Review One of the most anticipated movies has been released. Atomic Blonde is starring Charlize Theron, James McAvoy, and Sophia Boutelle directed by David Leitch (John Wick)...
by Ashish August 7, 2017

One of the most anticipated movies has been released. Atomic Blonde is starring Charlize Theron, James McAvoy, and Sophia Boutelle directed by David Leitch (John Wick) one of the better films released this summer. If you don’t know Atomic Blonde is based on the Oni Press Graphic Novel by Antony Johnston and Sam Hart check out Rachel Bellwoar’s review here. 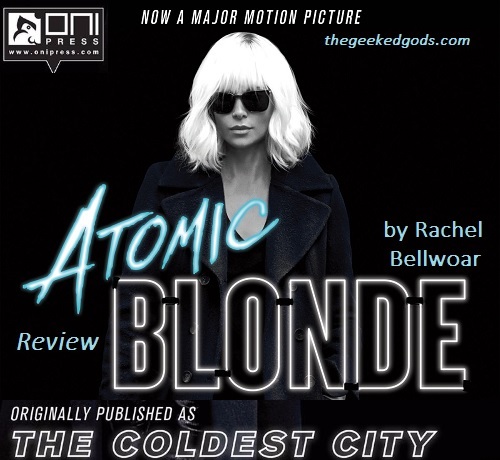 Atomic Blonde’s premise is a spy James Gascoigne was killed with a list containing all the Spies in Russia was stolen from him. A man is going to sell the list. MI6 deploys Agent Lorraine Broughton (Theron) to retrieve and obtain the list for MI6. Her bosses at MI6 inform she must work with embedded station chief David Percival (James McAvoy) to navigate her way through the deadliest game of spies and obtain the list. But as things in the world of spies all this is easier said than done.

It seems a lot of people are confused by the end of Atomic Blonde. Many it seems didn’t understand the purpose or didn’t stay for the end. It could be confusing But before we continue.

For the first 3/4’s of the film, I fumed as Atomic Blonde felt like a by the numbers spy film. I didn’t quite understand Charlize Theron’s Lorraine Broughton was so concerned about the list, was she so hurt by the loss looking for revenge for the death of James Gascoigne (Sam Hargrave).  Also, David Percival (James McAvoy) motivations didn’t make sense yes he rogue, was he the infamous Satchel and why would he kill Delphine LaSalle (Sofia Boutella) and Spyglass (Eddie Marsan). All is revealed in the end when we find out that Lorraine Broughton was the triple agent Stachel she fed false intel to the Russians, good intel to MI6 and worked for the CIA. The beginning where she called Emmett Kurzfeld (John Goodman’s) character a cocksucker. In the end, it turns out Percival was just a spy trying to make a buck off the list and get in the Queens good graces. He had gone rogue living in Berlin and knew he could make a lot off the list. Percival had to kill Delphine and Spyglass, so he was the only person with knowledge of the contents of the list. He also wanted to out Lorraine as Satchel. Lorraine had to eliminate Percival to keep her covers. In the end, Lorraine’s mission was a success she got the list, praised by MI6 and went home to CIA with the cover intact.

Atomic Blonde was saved by the end scene it made the movie. It was an ending that you could see where they were going but still enjoyable to see executed on the screen. Watching the trailers, I questioned Charlize Theron’s British accent but didn’t think anything of it until the end. Atomic Blonde fight scenes are fantastically choreographed the set pieces show case the 80’s and Europe. Atomic Blonde is a well-crafted spy film that leaves you guessing until the end. The only part of the script that didn’t work for me at first was the debriefing as it seemed that Lorraine was able to complete the mission. It took away from the mystery of the story, but the end more than makes up for it.   It would be okay if this was a one and done film or if they wanted to expand the story to later years like the 90’s.The film features fantastic acting performances from Charlize Theron, James McAvoy, and Sophia Boutelle. Hollywood needs to feature Sophia Boutelle in more roles. This movie will be compared to John Wick due to the Director and slick fight scenes and the trailers have you thinking that this is a revenge tale or a female John Wick tale however that is not the case. This movie is about the cold war and the world that spies in that time.  If you’re looking for a cool spy film, great female lead, James Bond without the gadget or dickheadedness or want to remember the USSR in the 80’s check out Atomic Blonde.