Ash vs. Hillary vs. Trump: A Voters Guide This year’s election has been, if nothing else, strange. We’ve had death threats, penis envy and a bunch of dank memes...
by James O'Donnell November 8, 2016

This year’s election has been, if nothing else, strange. We’ve had death threats, penis envy and a bunch of dank memes that were lost forever when Hillary Clinton had to clear her servers. But more than anything else the strangest thing about this election has been the fact that it feels like both major parties are desperately trying to self-sabotage this election. The question is: Why?  Why would a major political party throw the change to govern the country for four or eight years? It’s almost like they know something bad is coming. Something big. The best answer I can surmise: Deadites. 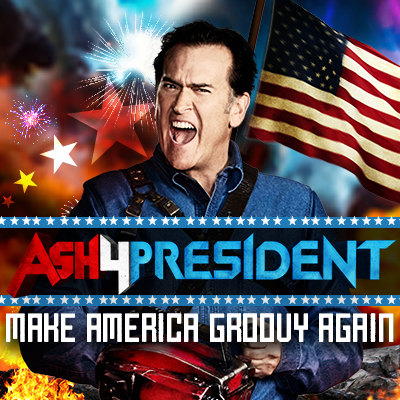 That’s right kids, the deadites are coming and we’re all going to die horribly. Unless we make the right choice when we go to the polls today…

Earth 1, in which Hillary Clinton has been elected President: 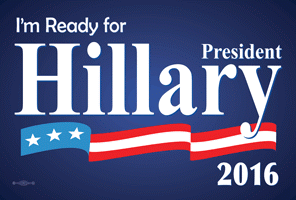 The deadite invasion begins as massive portals open up in New York, Washington DC Los Angeles and Chicago. Acting with a singular purpose of vision Madam President evacuates with her closest confidants, consulting on the best possible strategy. Marine-1 lifts off from the White House roof as the coldly watches Tim Kaine claw at the doors, begging to be let onboard. She orders John Podesta to keep the door closed and has he turns back the chief of staff’s head is ripped clean by the deadite VP as he lunges through he bulletproof glass.

As Podesta’s gore spraying body lurches through the helicopter’s cabin, Kaine rips his way through a small army of Secret Service Agents. He pauses suddenly as he catches the scent of lust and fear coming from the bathroom stall. He rips open the stall to find a petrified Bill Clinton laced up with a spry young staff member. Just as he closes in on the former President his head is cleaved in two by Hillary.

After tomahawking the cleaver into the young intern’s skull she orders Bill to retrieve her former chief of staff’s phone. She heaves the pilot’s lifeless corpse aside and takes over the aircraft’s controls.

“Bill, get Paul Ryan on the fucking phone this fucking instant or so help me god I will cut that crooked dick from your body and feed it to the goddamn cat.”

Her new second in command briefs her on the crisis; portals to the underworld had opened over the country’s major cities with thousands killed and more possessed by hateful demons. Hillary decides to execute an executive order to erect great walls around New York, Chicago, Washington DC and Los Angeles. She calls in favors from some “business acquaintances” and within 24 hours the walls have been erected and the deadites are contained, after a swift and decisive nuclear strike the deadites, along with millions of innocent lives, are no more. In an unprecedented turn of fate Mrs. Clinton becomes a folk-hero in the country’s rural areas and she is elected in a landslide to a second, third and fourth term in the nation’s new capital: Omaha, Nebraska.

Earth 2, in which Donald Trump has been elected President:

President Trump is woken from a sound 3-hour sleep and alerted of the deadite horde wreaking havoc in the streets. He asks his racist butler to summon Malia from her room down the hall and begins his day as he always does: on twitter. As he ignores the frantic briefing offered by his chief of staff as he peruses his feed. He begins to sweat as he sees the trending topic #DeaditeTrumpsfault. Salivating with anger he takes time to personally respond to each and every derogatory message when suddenly he comes across a message from his arch nemesis: Rosie O’Donnell.

His hands trembling, he types out a response while ignoring the nagging phone calls from his chiefs of staff.  He types out the perfect retort…

@POTUS: Rosie O’Donnell has the nerve to criticize. Im the prez. So much class. She is a walking fart. #Fuckmexico.

At bliss with his brilliant comeback he slides out of bed and slips his on his hairpiece. He finally answers phone on his bedside table.

“Jesus do you people ever stop calling me?”

“Mr. President we’ve got a serious situation. Millions of people have been turned into these…things they’re killing….”

Mr. Trump abruptly slams the receiver as he glances down at his phone to discover a response from Rosie.

His bedside phone begins to ring again and Trump, now a unique shade of crimson apricot, rips it from the wall. He then engages Ms. O’Donnell in a series of 140 character rants he insults everything from her body size to her Irish ancestors being “Potato licking shitbags.” Finally feeling satisfaction after Ms. O’Donnell deletes her twitter (or San Francisco is engulfed in a vortex of doom) Trump finally stumbles out of his bedroom to find his wife, white eyed and wearing the carcass of Sean Hannity like a pelt.       “Our job is, first and foremost, to shred our family to pieces,” she shrieks, lunging forward to rip her husband limb from limb.

The United States is overrun by demons. The few survivors live in constant terror as hordes of deadites roam the streets freely. Deadite Melania now rules over the nation with an iron fist. The nation is without hope, save for a small but growing faction of rebels being lead by a former Senator from Vermont.

Earth 3 in which we all Vote for Ash Williams this year: 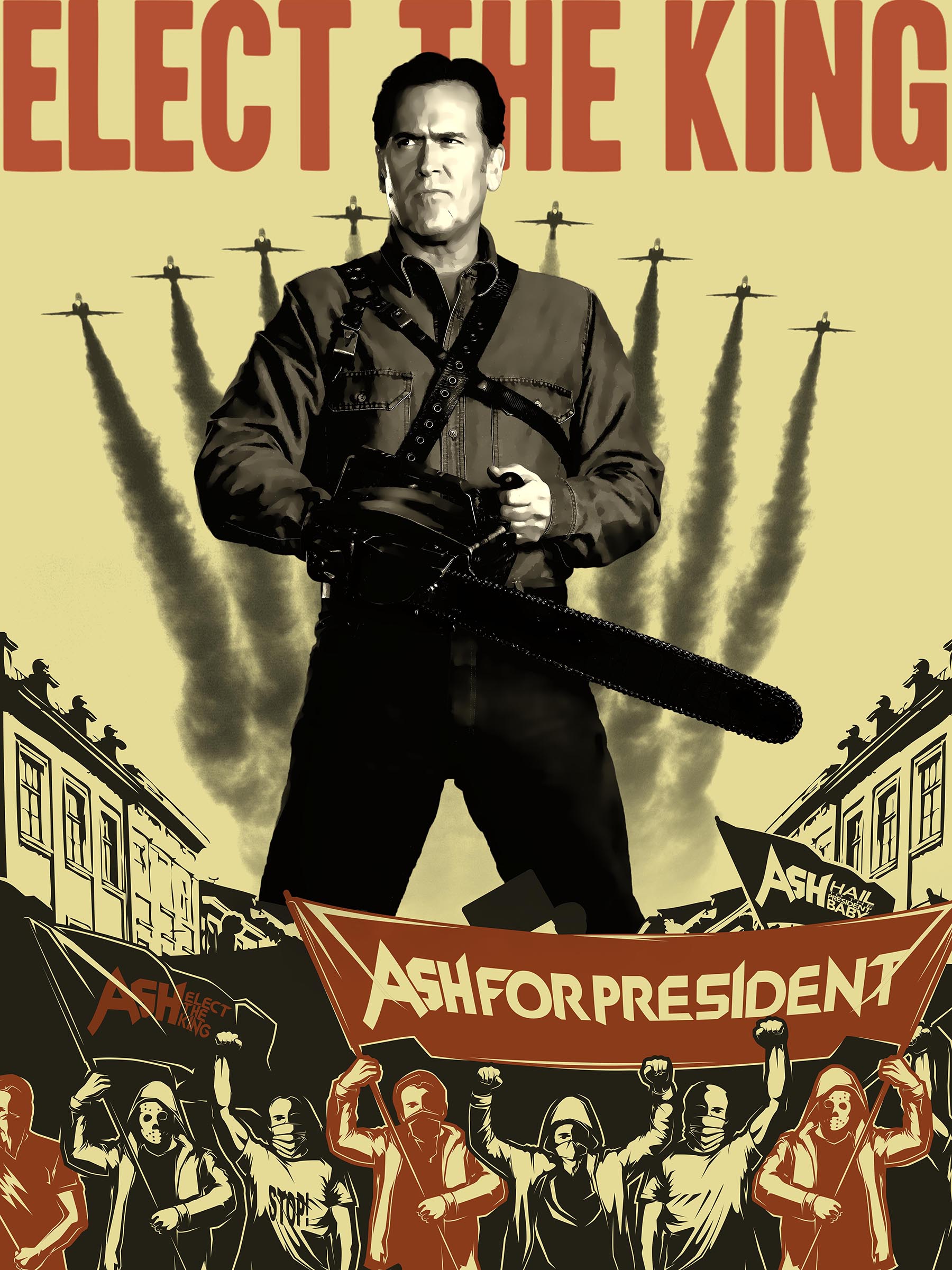 The Secretary of State bursts through the door of the oval office to find President Ash and Vice President Jennifer Lawrence smoking a joint listening to King Crimson.

“Uh, Mr. Big Stuff, we have a serious situation: there are portals in every major city, people are killing each other…”

“Let me guess,” Ash says as he exhales a thick cloud of smoke. “Fire and brimstone, rivers of blood, people tearing each other apart?”

“That’s pretty much the scenario, sir.”

After finishing their joint and jamming out to In the Court of the Crimson King Ash and his VP set out to destroy the horde of deadites that are destroying the country. Using the principles of teamwork, sacrifice and a few gallons of Wild Turkey, the dynamic duo boomstick and chainsaw their way to the base of the Lincoln Memorial. As Ash slashes and blasts every demonic assclown in the greater DC area his Vice President reads a passage from the Necronomicon, which closes the portal in Washington and causes a ripple effect that crashes the other gateways around the country.

After once again saving the day Ash is hailed as the greatest president in history and is elected to 7 consecutive terms in office before eventually just being declared Head Honcho Vitae.” He replaces Ben Franklin on the $100 bill and is given a larger, yet slightly curved-to-the-left Washington Monument. The country is prosperous and a new era of prosperity, peace and universal kindness lasts for 1000 years.