Ash vs Evil Dead: Season One Review by Paul Aloisio

Ash vs Evil Dead: Season One Review The chin is back, and by that, I obviously mean Bruce Campbell as Ash Williams, veritable Deadite slayer, and master of... 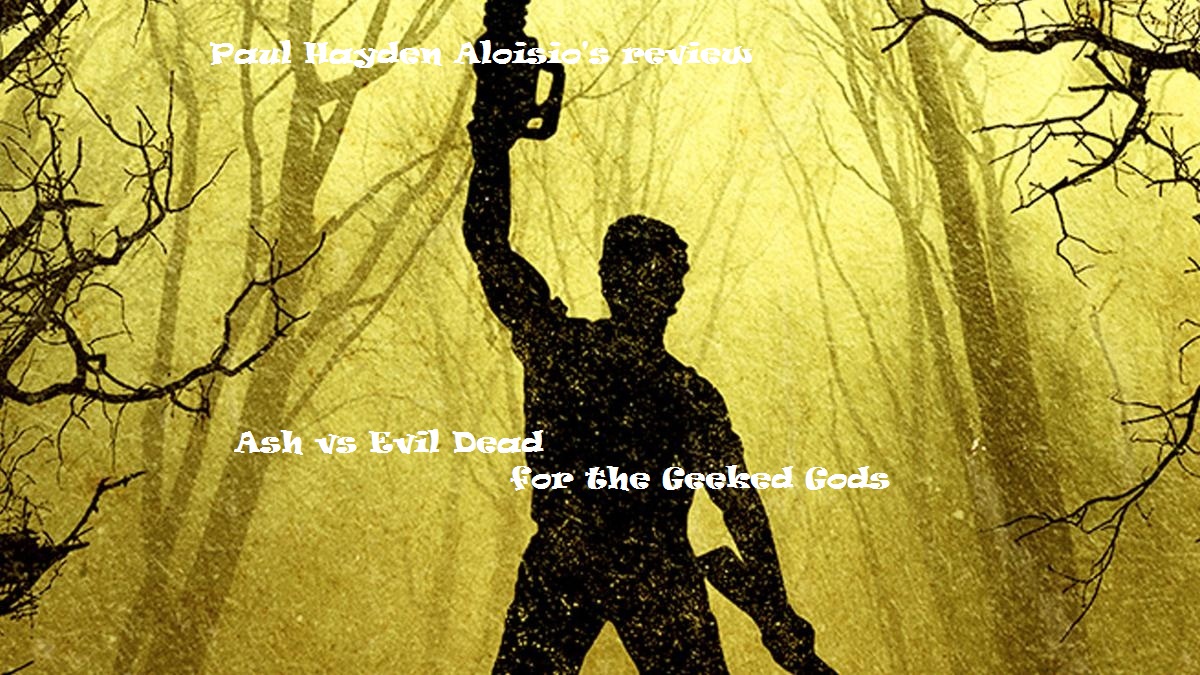 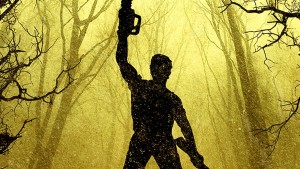 The chin is back, and by that, I obviously mean Bruce Campbell as Ash Williams, veritable Deadite slayer, and master of all things chainsaw…y. Yes, that is how I’m starting this review, with the word           “chainsaw-y.” What are you gonna do about it?

I’ve been waiting patiently for years upon years to finally see Bruce Campbell play this role again, so the stakes have been set incredibly high. The question is, after seeing all ten episodes of the first season, was the wait worth it?

To that I must say: Absolutely. There were flaws, but it was still absolutely worth the way. Let’s begin this review by talking about the pros, because I’m still reeling in excitement from the conclusion of the season on Saturday. 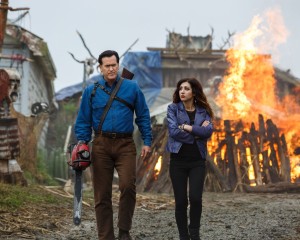 First of all, to truly understand why this television show is so great, you have to understand something about the Evil Dead movies themselves. They’re undeniably cult classics, the undefeated champions of their kind. Never before has a man brandished a chainsaw for a hand and done it with such deadpan and goofy delivery. For years, Ash Williams has been for fans as a hidden secret. A thick-skulled badass of a secret, at that. There are not many people who consider the films “just okay”; there are less that just don’t like them, plain and simple. However, the majority opinion is that Evil Dead, and Evil Dead 2 for that matter, are the greatest things to happen to horror since George A. Romero’s Night of the Living Dead. The second (and superior) Evil Dead film is a horror-comedy in every right, but way more unique than the genre’s name may imply. It’s over the top. It’s off the wall. For lack of a better term, it’s absolutely insane. Ever since its release fans have been begging for more. And then, one Halloween night in 2015, we finally got what we’ve been begging for. Ash has returned. Our savior. The messiah came back for us, and he brought a whole bunch of goodies along with him.

The goodies, as it turns out, were his own selfish characteristics, amplified tenfold by the new series. Some may gripe that he’s gotten a little too selfish and boneheaded, but what can you do. People grow. People change. And sometimes, people change, but don’t really grow all that much, like in the case of Ash. Years later, he lives in a trailer and wears a girdle to suck in his gut. He’s got dentures and a bad knee…among other things that don’t quite work correctly. His character’s growth, or lack thereof, was genius. Most showrunners would have the hero return with all sorts of improvements and shiny new things. For Ash, the shiniest new thing that he’s got is a button on the floor of his trailer that springs his shotgun out on the very rare occasion that he needs it, which must be very rare, as most department store employees aren’t known for their Deadite-slaying rampages. Most. 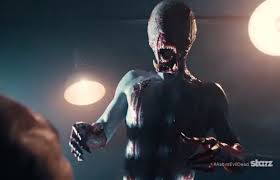 No, actually Ash would never have to go on a rampage again if not for his own foolishness; in an inebriated state, he summons the Deadites from the Necronomicon once more for the sole reason of getting lied by a hot girl. For Ash, the consequences are dire, but for the viewer, well…it makes for a Goddamn good television show.

We’ve got the chainsaw back, so that’s more than anyone could ever ask for. Beyond that, we get Bruce Campbell’s uncompromising humor and charm, and when he is paired with his two new sidekicks Pablo (Ray Santiago) and Kelly (Dana DeLorenzo), the show’s strengths truly come out. It reminds you that Ash is not the only character in the universe, and that becomes all the more obvious whenever Santiago steals the show, which is quite often. Looking back, it is hard to imagine a world where Pablo did not exist. He’s completely hilarious and has a ton of heart. Ray Santiago is a phenomenal actor and I wish him the best of luck in anything he does after seeing this. His attraction to Kelly is both adorable and sincere, something I hope to see more of in the next season (which was already confirmed before the first episode aired). The only gripe I have with any of these characters would have to be the dialogue, especially Kelly’s. Her lines seem a bit poorly written and contrived. However, that is not DeLorenzo’s fault in any way, shape, or form; she takes on the role with conviction and power, doing the character way more justice than probably any other actress is capable of. The jokes fly and they get way more vulgar than I would have expected, which is a great extension to the subtle goofy humor that we’ve seen in the previous Evil Dead movies. It’s a bit unsettling to see Campbell use the word “fuck” so often at first, but by the end of the season it’s hard to imagine a universe where that doesn’t exist, much like Pablo. 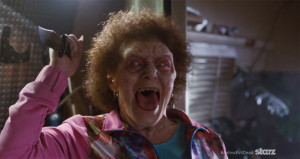 The show gets a running start and completely tears through the first two episodes, literally ripping into your skull with chainsaws, boomsticks, and more, until slowing down a bit. Actually, it slows down a lot…so much so that the show does not really find its footing again until the final three episodes. That’s not to say the other five aren’t great; they’re just not as balls to the wall awesome as the better five. Binge watched, this show would be an absolute joy. When waiting for each week’s new episode, however, the slower episodes seem a bit harder to digest. Once again, they’re not terrible, they just don’t kick absolute ass like the beginning and end of the season.

The two characters above are not the only new additions; we also have Lucy Lawless of Xena: Warrior Princess fame and Jill Marie Jones of Girlfriends and Sleepy Hollow. Both are excellent in their own unique ways and definitely add the stellar cast. Who would have ever thought that Bruce Campbell would play Ash Williams in a new television series and anyone would care about a character besides him? That should speak volumes about the new additions. I cannot praise them enough for their performances and executions.

At the end of the season, we see an almost shot-by-shot recreation of the infamous cabin from ED2, and it is glorious. The practical effects are wild and gory, and there’s even a sequence in which a small demon-child gets his head blown off. Yeah, it’s understandable why this wouldn’t have any place in conventional cable programming.

I don’t want to give away any spoilers for those who have yet to finish the series, but the writers prove that they are not afraid to take risks in more ways than one. That’s all I’m going to say on the subject, but once you get to the “holy shit” moment in one of the later episodes, I’m sure you’ll be able to figure it out. Kudos to Ivan and Sam Raimi, as well as Tom Sepzialy, all who wrote the show.

The sad, possibly predictable answer, is CGI. One of the biggest detriments to a horror movie or television show wormed its way into my most beloved franchise, and I’m very sad to see that. The original movies were known for their heavy, uncompromisingly original reliance on practical effects. However, I will give a pass for this. It is clear that they did everything they could to make the show as practical as possible. I always understand that creating ten episodes with a fixed budget makes it damn-near impossible to have over-the-top gore exclusively with practical effects. If this was a 90-minute movie, I would not have been as forgiving. But really…we’ve finally gotten Ash back, so I feel like a greedy, snotty little kid even saying anything wrong about the show. Ash vs Evil Dead’s true merit lies in its heart and story…two things that this show has more than enough of.

Despite a minor gripe with the production of the show, Ash vs Evil Dead is the best thing to happen to the horror genre in a long time. I can’t wait to see how the story progresses into the new seasons and hope for more than just one more. Looking to the future, I sincerely hope that they play the story out tastefully, not making it run on for more than necessary just because they can. But if they do? I’m sure Sam Rami and company will be able to make magic, just as they have already done with this first season.

The Geeked Gods Presents our Parody the Joker Show