This is must-watch TV in its purest form. Missing out on American Gods is a serious mistake. 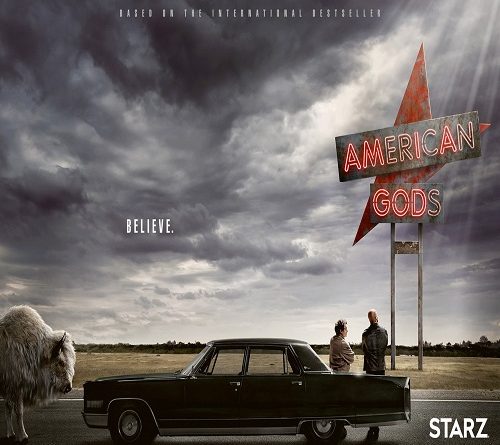 When I first heard that Neil Gaiman’s beloved novel American Gods was being adapted for a TV series, I was, understandably, a little concerned. The novel has quickly garnered a rabid cult following for its intricate and surreal tale of the New Gods versus the Old. With such an outlandish story – one that features an extremely memorable scene in which a Goddess quite literally swallows a man with her vagina – I would argue that if you weren’t even a little concerned, then you clearly didn’t pay attention to the book.

But over the course of the show’s introductory sequence, my fears were quieted. With a combination of history, religion, and over-the-top gore, American Gods gets to the point right away. It is clear from the beginning that this is in no way going to be an ordinary show.

American Gods follows a man named Shadow Moon (Ricky Whittle), who is released from prison three days early due to the unexpected death of his wife. He meets a man who refers to himself only as “Wednesday” (played by the eccentric and wonderful Ian McShane) who seems to know an uncomfortable amount of details about Shadow’s life. After discussing a mysterious job opportunity, Shadow’s life changes for the bizarre and mystical in the blink of an eye, getting caught between a battle of the Gods.

The first episode, “The Bone Orchard”, contains all of the ingredients for a compelling fantasy drama. It is soaked in intrigue and stuffed to the brim with emotional performances. The gore is so insane that it takes on a feeling of black humor and disquiet all the same, making for a very tense episode. It’s so surreal that newcomers to the story may be more than a little confused but compelled enough by the smartly-written characters to stick around to find out just what in the world is actually going on.

However, if you are one that needs to be in the loop at all times, this may not be the show for you. It takes a genuine leap of faith to sign up for eight episodes that, from the beginning, seems like an experience of LSD gone horribly awry. Here we have a six-foot leprechaun, a vaping Computer God, and yes – that whole killer vagina thing I was referencing in the beginning. For those turned off by the initial craziness, I would make a genuine plea for them to stick around to its conclusion. While it certainly will not get any less crazy, it will begin to make sense.

As someone who read Gaiman’s novel, the show delivered on all fronts. It was amazing to see such an honest adaptation of a story that is so unique and strange. Lines are delivered exactly as I had imagined it in the book, and it felt like an awesome hour-long deja vu experience. Showrunners Brian Fuller and Michael Green appear to have a genuine love and appreciation for the story, bringing it to screen with care, respect, and more than a little bloodshed.

This is must-watch TV in its purest form. Missing out on American Gods is a serious mistake. Review: Pestilence #1-When a plague is not a plague