Alaska Robotics Gallery Interview by Jake Hill When I travel, I love to check out local comic book shops. Most major cities have at least one, and all of...
by Jake Hill September 15, 2017 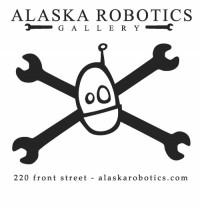 When I travel, I love to check out local comic book shops. Most major cities have at least one, and all of them are vastly different at their core. Some shops focus on the social element, hosting board games and roleplaying events. Others look like ancient apothecaries, filled with rickety piles of musty action figures. One of the most surprising shops I’ve ever encountered was the Alaska Robotics Gallery in Juneau, Alaska.

Juneau is the Alaskan state capital, and with a population of just under 33,000, is not exactly a huge metropolis. Juneau is also uniquely isolated, with no outgoing land transportation. There’s no connection to a road or highway, no train, the only way to and from Juneau is by boat or by plane. This unique situation led Pat Race and the operators of the Robotics Gallery to sell their product to an unusual demographic.

“Juneau is a small, isolated town which is tough but we also get about a million tourists through each year which gives us a seasonal boost,” Pat told me. “In fact, a lot of crew members from the big cruise ships will stop by each week they’re in port and pick up the next book in a series to read while they’re at sea.” Throughout the cold winter months, Robotics Gallery sells comics to locals, but for a few months out of the year, the rush of tourists gives a significant boost. More than that, the influx of people working in the tourist industry are a reliable source of revenue.

One of the things that struck me about Robotics Gallery was their robust trade paperback selection. A lot of comic shops struggle with selling individual issues, in part due to practices by major publishers and Diamond Distribution, which has the monopoly on the sales of single comic issues. Robotics Gallery sells some vintage collectible issues but has moved completely away from single issues a major product. When it comes to comics, they sell complete collections, and their selection rivals those you would find in shops in much larger cities. 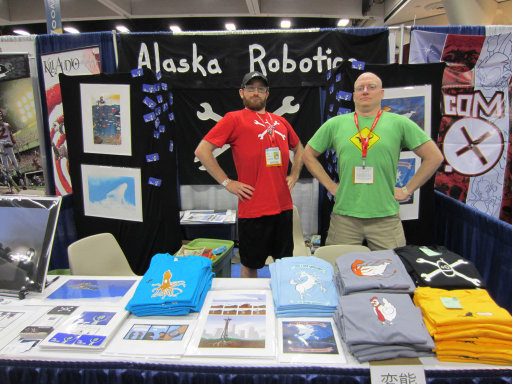 The other secret of the Robotics Gallery is right there in the name. “Juneau has a great enthusiasm for the arts, and there are a ton of galleries, so it wasn’t like we just set up shop in the woods,” Pat says. “We just brought something different to an existing community of galleries in our downtown by focusing on visual storytelling and comics instead of bears and whales… although I do draw a lot of bears and whales.”

That was the other most striking thing about the Gallery. Although it’s a place you can buy comics and games, it has the clean simplicity of an art gallery and is surrounded by other galleries, craft stores, and fine arts establishments. But if you’re the kind of person who likes to buy prints at conventions, you’ll be much more charmed by what Robotics Gallery has to offer than anything else you can find in Juneau.

Pat loves the community in Alaska and has an enlightened view when it comes to comics. “I’m a little surprised there aren’t more comic shop/art galleries out there in the world. I’d like to someday be able to spend more time on my art and just have a little studio space adjoining the gallery. Ultimately, I think our success comes from being very embedded in and supportive of our community and sharing our enthusiasm for graphic novels, games, and art. We host a lot of events, we bring artists to town, and we try to communicate that the books we carry can be for anyone, that comics are a medium, not a genre.”

This is what led to the Alaska Robotics Mini-Con, which declares itself A Tiny Convention and Comics Camp in Juneau. The people of Juneau love this event. I met locals raving about their past experiences and looking forward to the next con. Guests include a lot of local talent, but also some names that comic fans all over the country may recognize, including Ryan North of Dinosaur Comics and Unbeatable Squirrel Girl fame, and Raina Telgemeier, the cartoonist behind the graphic novel Smile.

I’m a comic con enthusiast, and there are many cities twice the size with conventions that are half as impressive. Robotics Mini-Con may not have guests attending in the tens of thousands, but it is a community event that should be a template for comic cons around the world.

So next time you find yourself in a strange city, try to track down the local comic shop. You may find yourself pleasantly surprised. And if you are the owner of a small comic shop, look at the Alaska Robotics Gallery as an excellent example. It’s one of the coolest shops I’ve encountered in any of the fifty states.