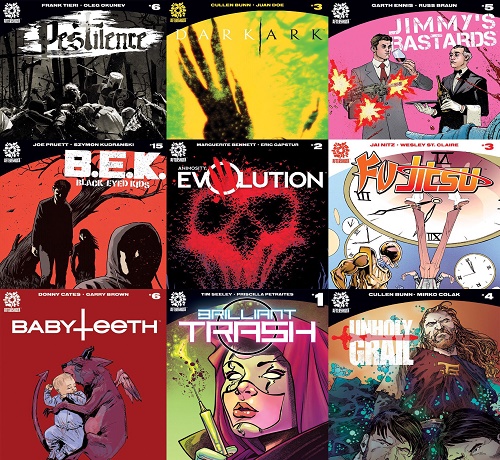 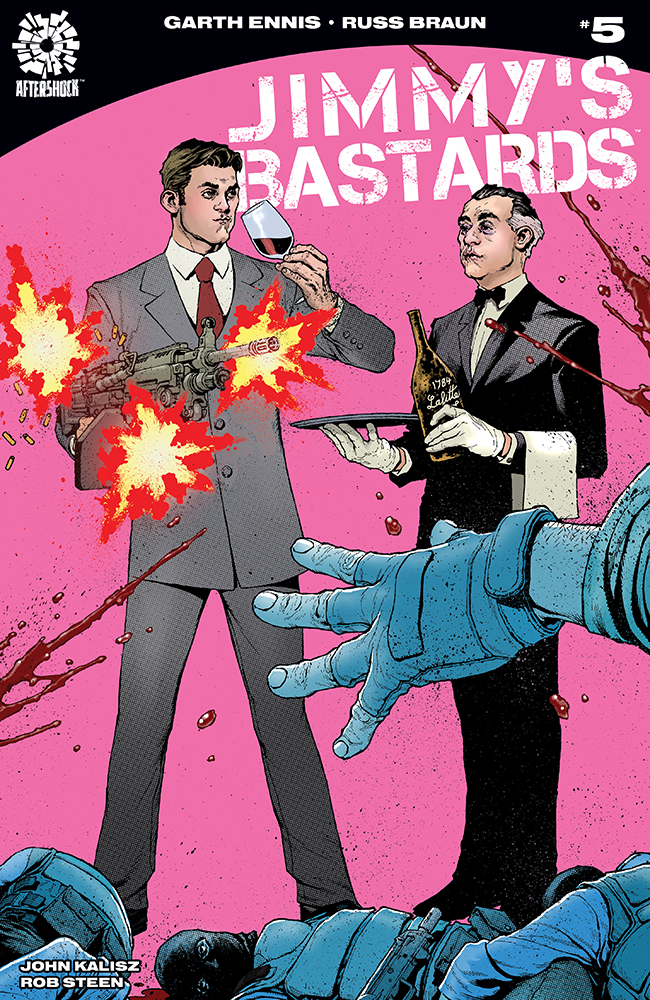 Jimmy meets his repulsive offspring at last, but things don’t go quite the way either side was expecting. For Nancy, all that skydiving practice she put in suddenly comes in handy—but a terrible surprise awaits her at ground level, in the heart of a suddenly very different London.

“JIMMY’S BASTARDS…is a crazy, offensive, beautiful debut to what is sure to be another Garth Ennis winner!” – Lucas Wagner of thatsnotcurrent.com

From the creator and writer of Preacher and The Boys comes the series that HAD to be told at AfterShock Comics. 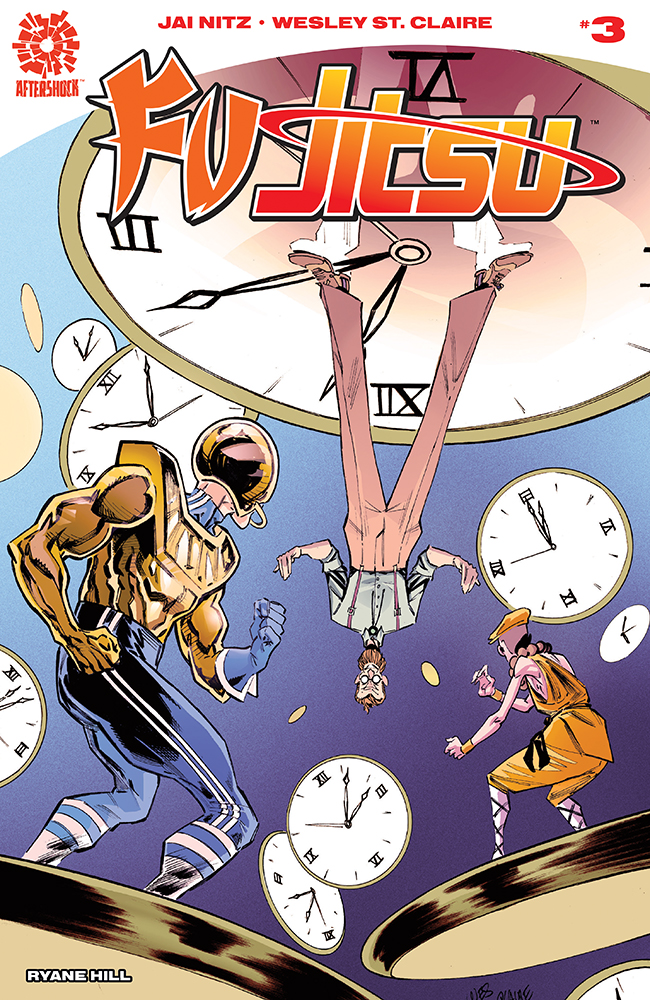 Travel back in time sixty years to 1959 where Johnny Unitas and Fu Jitsu fought crime as The Golden Arm and Shaolin Lad!  Then travel sixty centuries into the future where Robert Wadlow tries to escape the infernal prison at the end of time!  Then travel back to now and see this story is just getting started! Kung-fu-time-travel-football goodness, brought to you by AfterShock Comics! 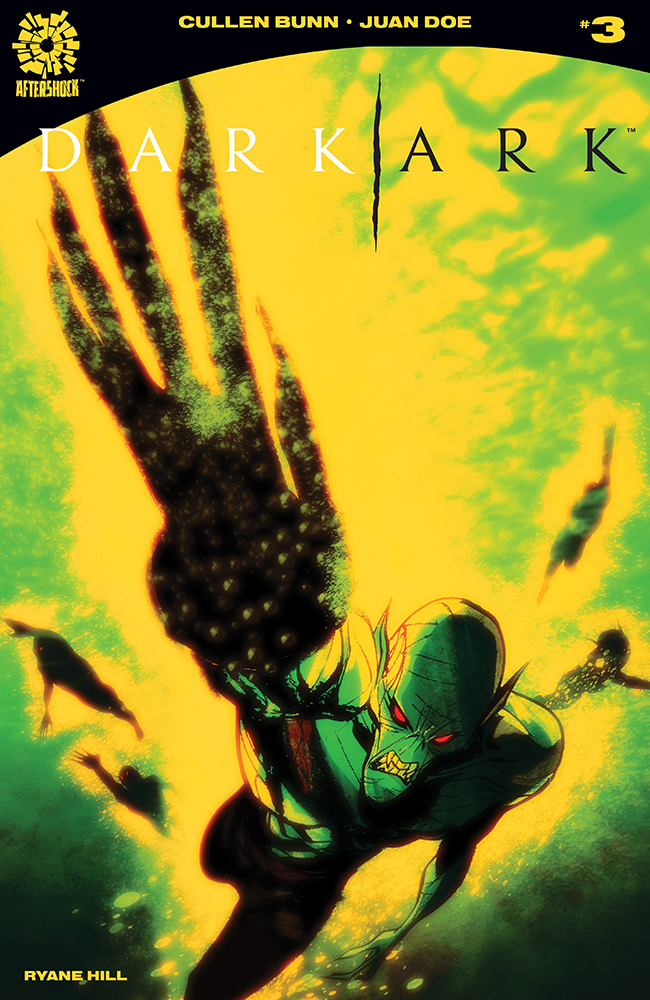 Something vile is lurking just beneath the surface of the fathomless floodwaters. As the rivalry between the various factions of monsters heats up on Shrae’s Ark, an evil from below rises to threaten every human life on board the vessel. 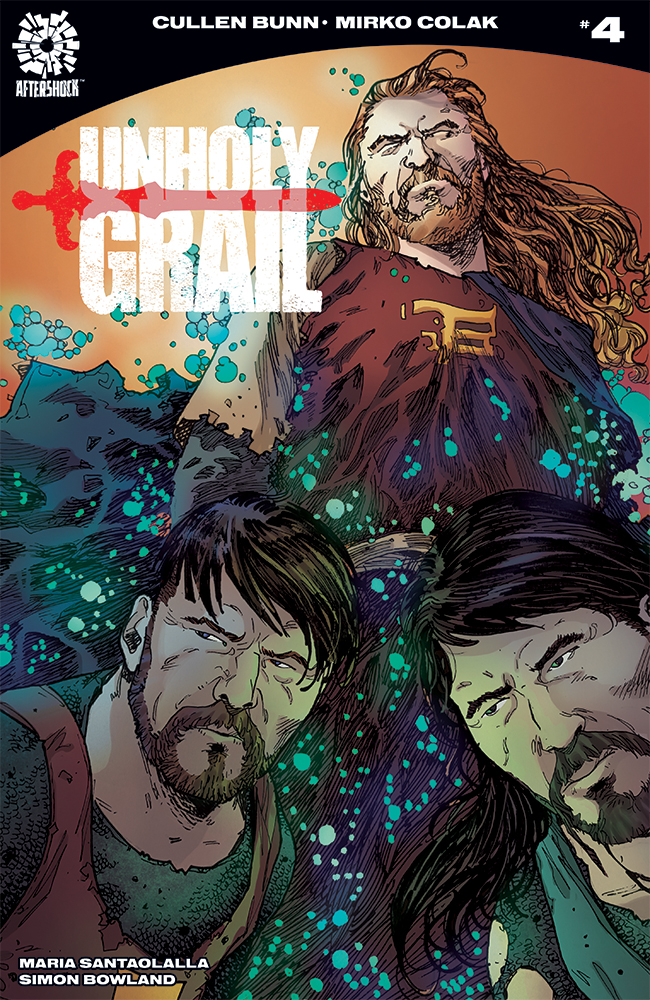 In a story where Merlin is the paragon of evil, how will Morgan Le Fay be depicted? The greatest enemy of Camelot arrives in the darkest chapter of this Arthurian horror tale. And the love affair between Lancelot and Guinevere is revealed—with deadly consequences!

From writer Cullen Bunn (X-Men Blue, Deadpool, Venom) and artist Mirko Colak (The Punisher) comes a Lovecraftian take on the Arthurian legend that HAD to be told at AfterShock Comics. 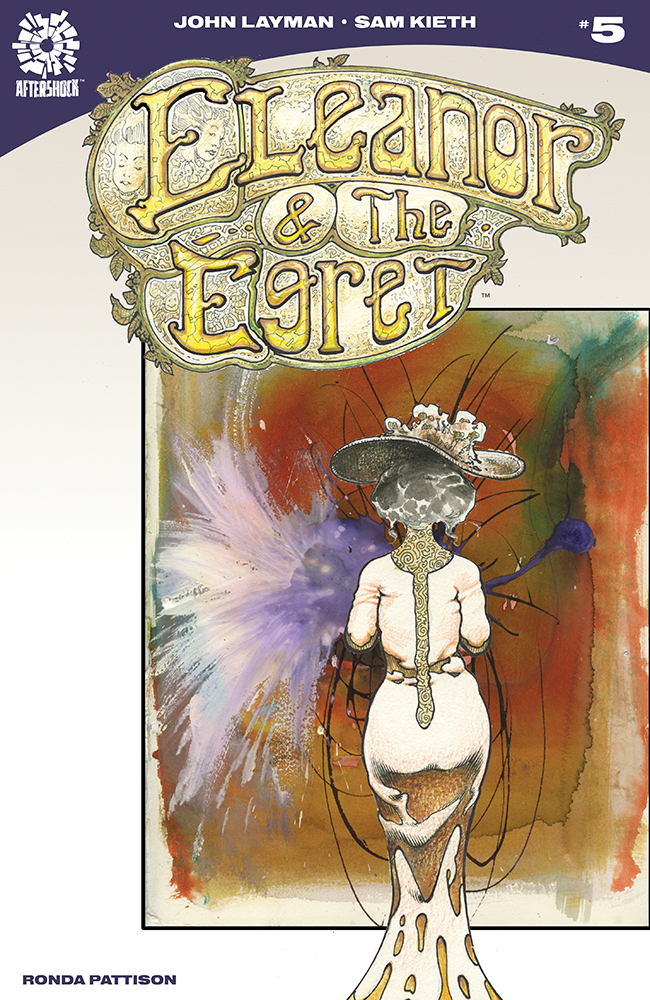 Eleanor and Ellis, the art thief and her art-eating egret, are embarking upon their most challenging caper yet…confronting the malevolent painter Anastasia Rüe. Eleanor intends to take back what is hers, and expose Rüe for what she is. Will our high-flying adventure end in triumph, or will this be E&E’s final flight? Find out in the stunning conclusion to the strange and wondrous adult fable by Sam Kieth and John Layman!

From John Layman, appetizing writer of Chew, and Sam Keith, captivating creator & artist of The Maxx and co-creator of Sandman, comes the series that HAD to be told at AfterShock! 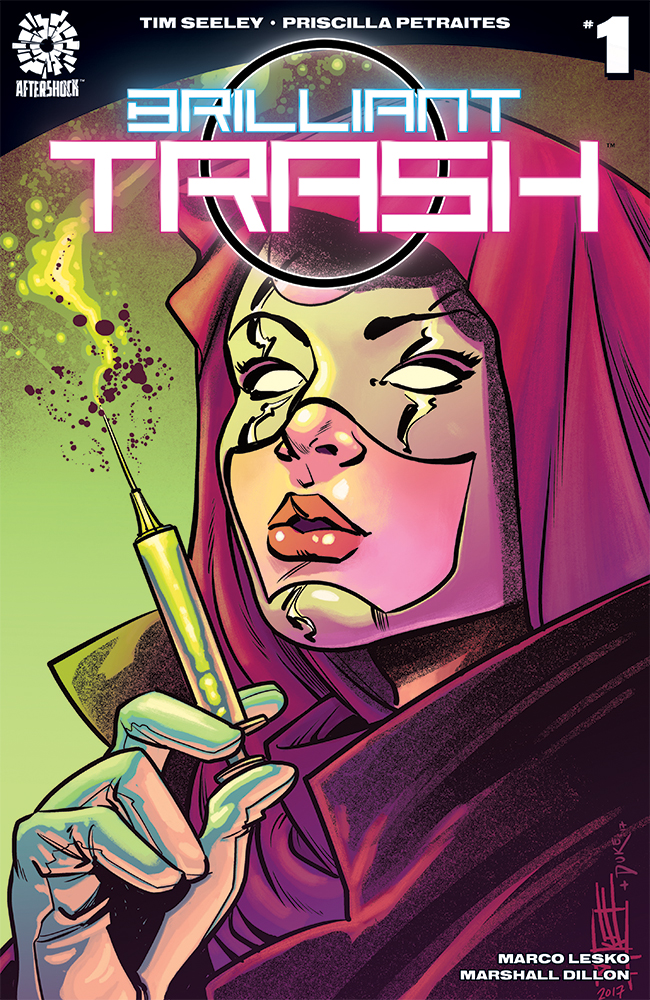 In the days to come, a super powered teenage girl wipes the heavily disputed Old City of Jerusalem from the face of the globe. Now, in American dystopia after the “Lady Last Word Incident”, a click-bait headline writing “journalist” holds the key to a med-tech conspiracy that could turn people into gods for the price of days off their lives. But in a world where news is tailored to every viewpoint, will anyone believer her?

A sci-fi superhuman epic from Tim Seeley, the writer of Revival and Grayson, and breakout art sensation Priscilla Petraites! 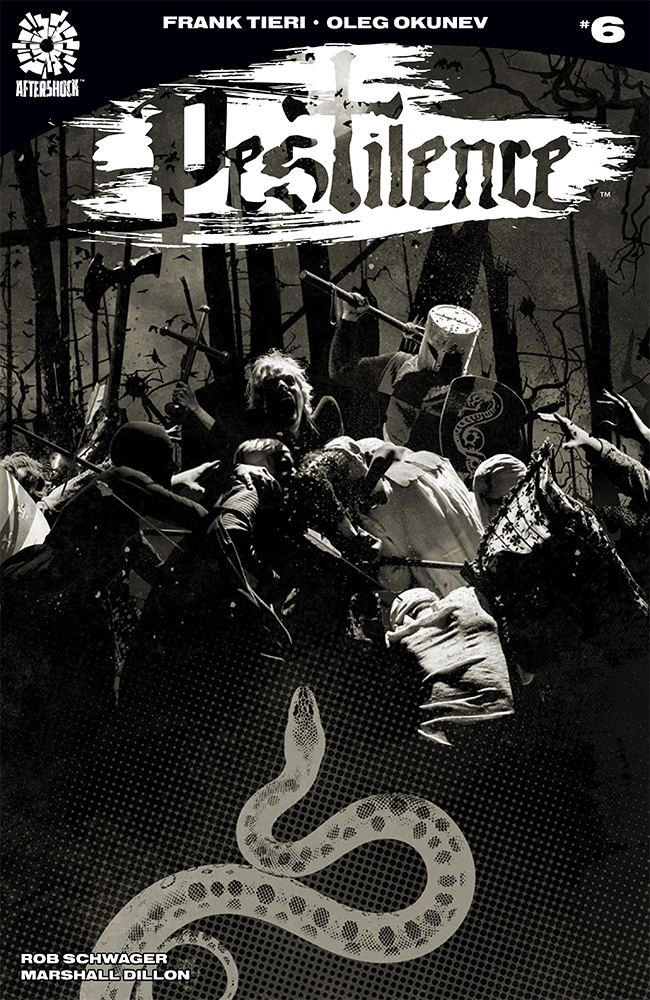 This is it—our knights vs. zombies epic reaches a startling climax!  Can Roderick and his able men of Fiat Lux navigate through the Church’s conspiracy and finally put an end to this apocalypse of the undead? Or will the unliving and the forces of evil reign forevermore?

Violence breaks out in the City by the Sea as the Animals struggle to fend off predators from both outside the city…and inside!

From the brilliant mind of creator/writer Marguerite Bennett (INSEXTS, Bombshells and Batwoman) with artwork by SHIPWRECK’s Eric Gapstur—ANIMOSITY: EVOLUTION is an exciting new series that expands upon this already amazing world! 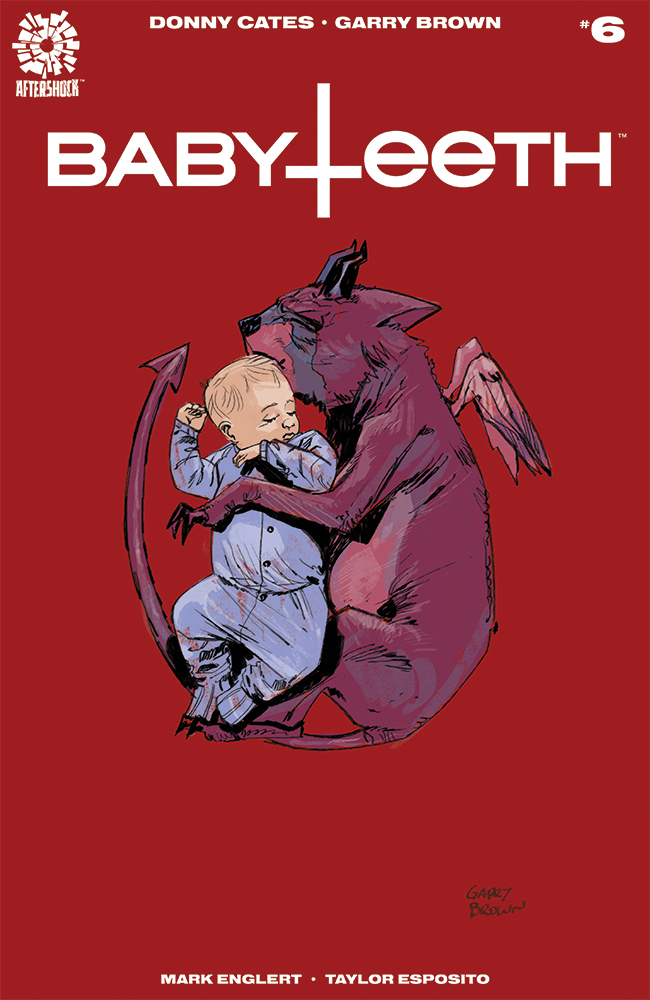 From Donny Cates, the writer of Buzzkill, Paybacks, Redneck and the breakout hit God Country, comes a pulse-pounding new series with art from THE REVISIONIST’s Garry Brown! 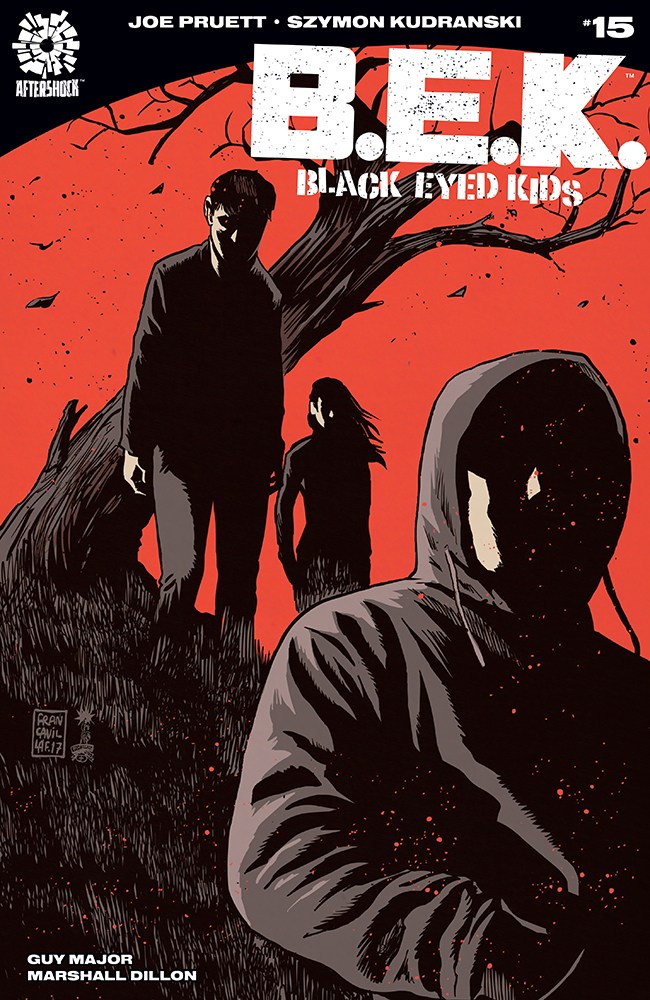 Still reeling from last issue’s traumatic ending, our surviving heroes decide it’s time to stand and fight. But are they prepared for the full fury of the Black-Eyed Children?

From EISNER AWARD winner Joe Pruett and Szymon Kudranski, the artist of Daredevil/Punisher and Spawn. 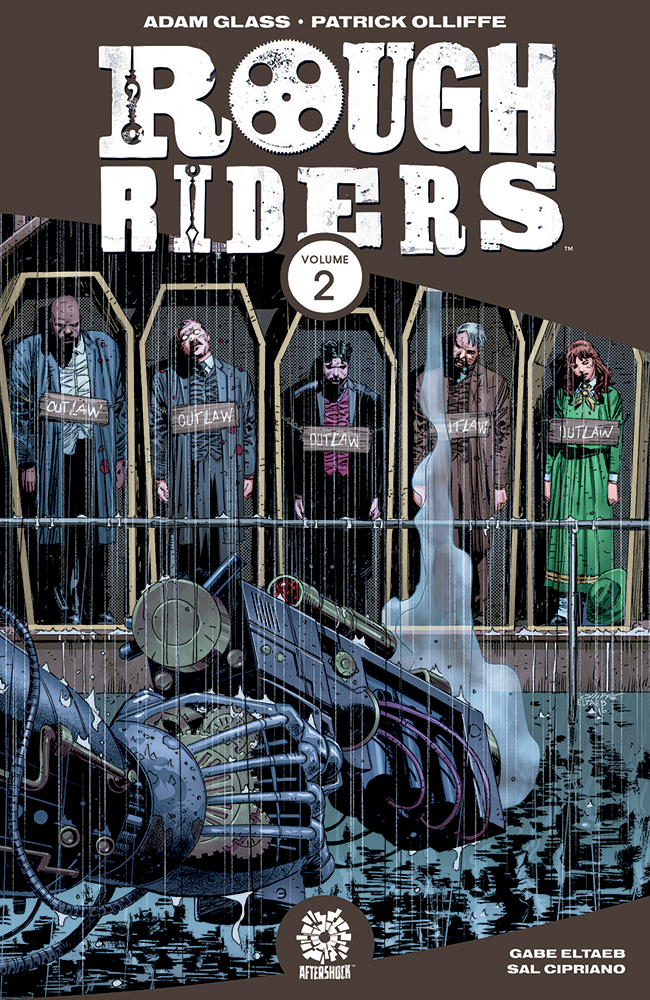 Collecting all six issues of the Riders on the Storm arc!

Three years have passed since the Rough Riders last adventure, but when an assassins’ bullet takes President William McKinley’s life, Vice President, Theodore Roosevelt is thrust into the role of Commander in Chief.  As a country mourns the loss of their leader, Roosevelt believes that the assassin is part of a bigger conspiracy, ones whose tentacles reach back to Europe and whose intentions are to destroy humanity through world-wide ANARCHY.

To stop them Roosevelt must convince Harry Houdini, Jack Johnson, Thomas Edison and a surprisingly very alive Annie Oakley to band together again. But time has strained the bonds that once united them and the ideologies of their enemies may have already seeped into one of their own.

Created and written by Adam Glass (executive producer of Supernatural and writer of Suicide Squad) with art by Patrick Olliffe (Untold Tales of Spider-Man). 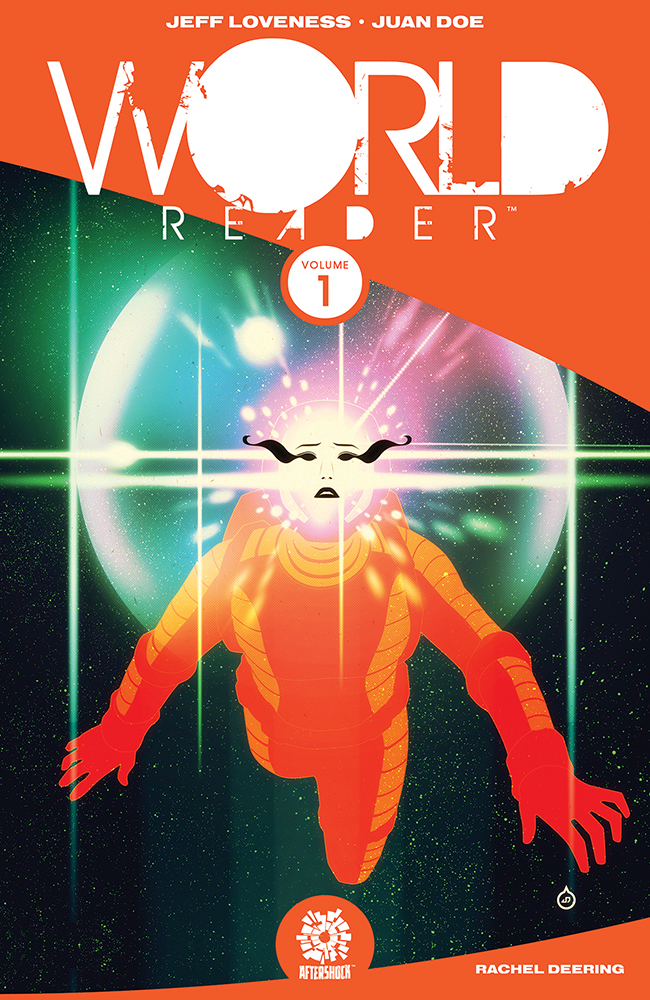 Meet Sarah, an astronaut traveling from dead planet to dead planet, talking to the ghosts of the dead worlds…as she fights to discover the secret that’s killing the universe.  But Death doesn’t give up its secrets so easily, and as Death hunts her from planet to planet, Sarah struggles to maintain the trust of her crew and her own sanity in the endless ocean of lives. Every world has a story, and if she can find the secret tying them all together, she can save Earth from being the next world to die.

From Groot and Jimmy Kimmel Live! writer Jeff Loveness and AMERICAN MONSTER, ANIMOSITY: THE RISE artist Juan Doe comes the chilling, epic new series that will be sure to appeal to fans of Arrival, Interstellar, and The Expanse.

Collecting all six issues from this hit AfterShock series! 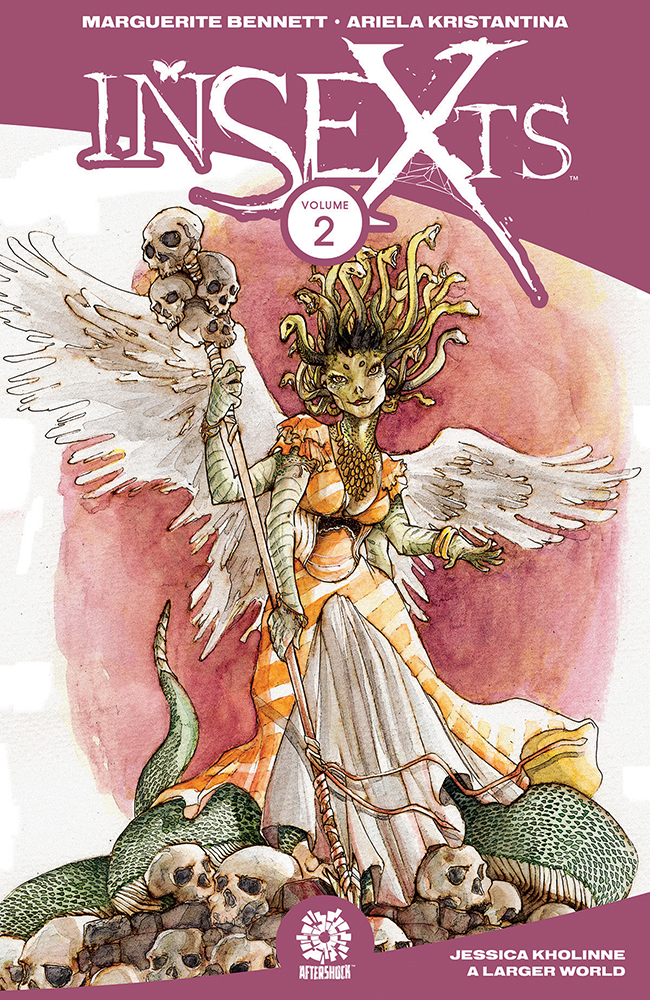 Collecting all six issues of “The Dragon” storyarc! The lovers have barely survived their battle with the Hag, and must now flee to Paris to heal, recover, and restore their love. But beneath the City of Light is a world of darkness, a world pulsing with witchcraft, seduction, and utter, obscene monstrosity…

From the brilliant mind of Marguerite Bennett, the writer of the break-out hit ANIMOSITY, Bombshells and Batwoman, with artwork by AfterShock’s own Ariela Kristantina!