Why has it taken this long for Scott Snyder and Jeff Lemire to team up? Why? Give me answers! Frankly, it feels like they’ve been holding out on us.... 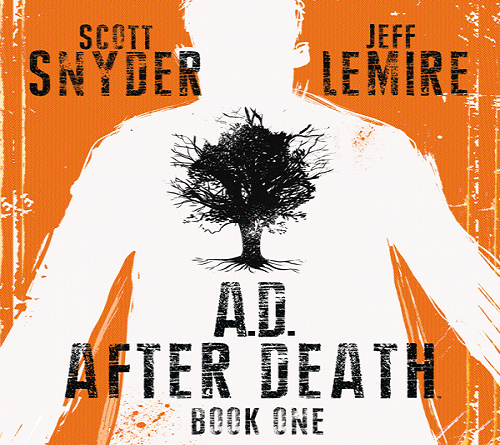 Why has it taken this long for Scott Snyder and Jeff Lemire to team up? Why? Give me answers! Frankly, it feels like they’ve been holding out on us. And that’s just not fair.

This is a combination of prose, beautiful watercolors, and almost impressionistic artwork all put together to tell something in an abstract yet tightly woven piece of art. All of the different aspects of the story – the straightforward comic panels, the pages that read more like a storybook, the polished narrative – they all come together in a result that is nothing short of genre-defying.

If you don’t like comics that are heavy on the reading, then get over it. There are many pages of only writing accompanied by a picture or two. This is too good for even those who choose to only read classic Marvel stories to gloss over. As I said above, this is much more than a straightforward comic, and I expect that many people may be confused as to what exactly this is supposed to be.

However, such a potent mix of wild ideas would surely come off as nothing more than a big, beautiful mess if the story was unable to hold everything together. In this first issue, there’s more than enough ambiguity to go around, but it is rooted in something deeper. By the end of it, you may not know the whole picture, but you’ll begin to get the idea.

The basic story is this: death has been cured. We don’t know how, but we know that we know that Jonah Cooke, the story’s protagonist, has something to do with it. We also know that he is well over 800 years old. We also know that there is a plague of thunderstorms, and much of the world seems ravaged, despite mankind’s new longevity. How do they survive? Why do they survive so long? And what exactly does Cooke have to do with this?

It appears that there is much more going on that what is explicitly stated here in this first volume, and the mystery alone is enough to pull you in. I won’t state all of the questions that arise with the cure for death; you’ll have to read it and find out just what those questions are for yourself. I’m sure you’ll be able to.

I do wish that instead of a three-issue arc it was released as a full graphic novel, but what can you do. There seems to be a lot to look into, and I hope that nothing is lost in having to wait for the next volume. But, if you’re smart this will not be an issue – all you’d have to do is read all three concurrently. Problem solved.

After Death is sickeningly intriguing, and I cannot wait to know more about what exactly is going on. But even more than that, I can’t wait to see how the story unfolds stylistically. I very much hope that the book stays abstract throughout all three issues; if not, I’m going to be one sad little boy.

But really, come on guys. The two of you need to pair up more often. I don’t think I’m alone in that sentiment.

A.D.: After Death gripping, emotional, and abstract. A unique way of going about telling a story; one that is sure to have many imitators in the future.